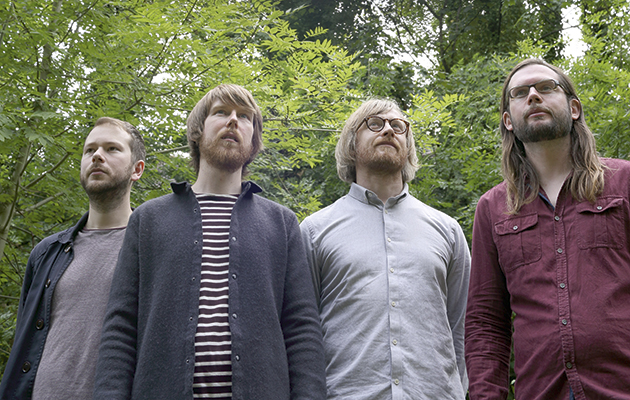 Since forming in a sleepy corner of Bedfordshire nearly 10 years ago, Wolf People have been exceptionally deft when it comes to pilfering sounds and repurposing inspirations drawn from a huge range of musical sources, many of them as quintessentially British as Morris dancing and boiled parsnips. But given some listeners’ wariness of bands who excel at bricolage, it may be wise for Wolf People to open their stunning third album with lyrics that were once used as an incantation for burglars seeking supernatural protection as they went about their nefarious business.

“Oh Hand of Glory shed thy light,” sings frontman Jack Sharp, “direct us to our spoils tonight.” The Hand of Glory was a talisman made from the pickled hand of a hanged man and equipped with a candle ideally made from the same corpse’s fat. “It’s pretty grim,” Sharp notes, explaining to Uncut that he found the verses in a Readers Digest encyclopedia of English magic and folklore.

Even though the words are a few hundred years old, the fact that Sharp’s silvery voice is smeared with distortion is one indication that Wolf People are more at home in the 21st century than the 18th. The same is true of the song’s other thunderous components, whether it’s the Television-as-acid-rock twin-guitar attack of Sharp and Joe Hollock, or the hard, fat beat provided by drummer Tom Watt.

The latter is a further sign that Wolf People’s first loves were funk and hip-hop rather than the beardier reference points their music has often suggested on the group’s first three releases: Tidings (2010), a compilation of early singles and embryonic recordings, plus the studio albums Steeple (2010) and Wain (2013). Indeed, on the best moments, the quartet maintained a low-end swagger as they flitted across a span of folk, prog, psych and proto-metal. They could be as gentle as Pentangle and The Incredible String Band or as burly as early Jethro Tull and Iron Claw. But when things truly took flight – like on Fain’s “When The Fire Is Dead In The Grate” – it was if Rick Rubin had a go at punching up Fairport Convention’s “A Sailor’s Life” for a Def Jam 12-inch.

That track now feels like a launch pad for Ruins. Songs that may have risked seeming overly fey or mannered – always a danger for deep dives into the freakier depths of the English pastoral – instead boast maximum force thanks to the pummelling yet adroit rhythm section of Watts and bassist Dan Davies, and to Sharp and Hollock’s nimble shifts between delicate bouts of interplay and crunchy riffage.

Whereas past efforts were sometimes blighted by a weakness for jammy indulgence, the songs on Ruins are sharply focused and blessedly heavy. Named after the Soviet women aviators who terrorised German forces in WWII, “Night Witch” uses Sharp’s keening vocal melody as the calm eye in a storm of howling fuzz and fury. One of several songs written from the perspective of the natural world as it prepares to reclaim the land from the people who’ve buggered things up so badly, “Thistles” is an equally powerful demonstration of how Wolf People synthesize their assorted early-‘70s reference points into a uniquely muscular and modern brand of psych-rock, one that aligns them with such friends and peers as Dungen, Black Mountain and Heron Oblivion.

Most impressive of all is “Kingfisher”, Ruins’ seven-minute magnum opus, nine if you count the two instrumental reprises. Inspired by the sight of a titular bird going unnoticed by busy humanfolk, Sharp’s lyrics lament our indifference to the wonders that surround us – thankfully, his writing’s acerbic edge prevents any excess of drippiness. Augmented by ghostly wisps of flute and eerie synth, the song gradually intensifies as Sharp and Hollock’s guitar lines begin to intertwine and catch fire, the result this time suggesting what Liege & Lief might have been if Richard Thompson had been joined by Tom Verlaine.

Here again, there’s a firm sense that all the signposts of the past have been successfully thrust into the present. Mind you, that present is a deeply troubled place, judging by how much Sharp’s songs despair over civilisation’s decline and Mother Earth’s possible hunger for vengeance. Ruins sees Wolf People harness that turmoil and turbulence in order to cast a light of their own.

Q&A
Jack Sharp
How did Wolf People find room for beats and breaks next to folk and prog?
Me and Tom [Watt] grew up in the same town playing in different bands as teenagers. It was the time of Britpop and eventually we felt like, “Forget this, we’re going to be hip-hop producers!” So we got deep into making beats and collecting and sampling records. Playing music again really came out of us finding all these amazing blues and folk and psych records and realizing that we wanted to play this music instead.

Why do you think it’s unusual for a band to brandish such unabashedly British influences?
I think with people who make music in this country, there may be a little bit of embarrassment about ourselves. Maybe it’s something to do with Britpop being too recent in people’s minds or maybe they don’t want to celebrate these kinds of English traditions or roots due to the political climate – people don’t want to shout about that stuff too much in case it gets misinterpreted. But I think it is possible to celebrate those things without being nationalist or right-wing about it.

Did you feel any reluctance to including more flute on Ruins even after attracting comparisons to Jethro Tull?
No, I just think, “Well, fuck it.” I love the sound of flute on rock records. How that basically started was we had a friend who played flute really well and started turning up at rehearsals. I didn’t really know anything about Jethro Tull then. After people were telling me about it, I finally listened to some early Jethro Tull and really liked it. Maybe they went too far down the progressive road later on and got a bit bloated but yeah, I’m not bothered by that – I wanted the flute!
INTERVIEW: JASON ANDERSON