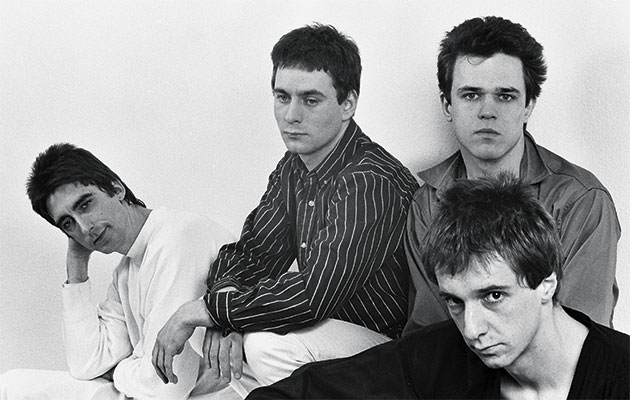 Wire’s first three LPs chart an evolution that appears so accelerated, you typically only see its like displayed by rogue AI in sci-fi potboilers. In the space of three short years, the London quartet learned how to play their instruments, released one of the great major-label punk records, perfected the art of the obtuse pop song, and then left the orbit of rock’n’roll entirely. Wire’s tone could be lofty – arrogant, even. But their early music is also hugely generous, packed with unusual melodies, smart studio tricks, unusual concepts; a Wire song might be about swimming, or insects, or air travel, or something altogether more enigmatic and obscure.

This new raft of reissues collecting remastered versions of Wire’s first three LPs come in two flavours – as a run of single-disc editions that faithfully replicate the design scheme of the original release, and in expanded editions that add a host of extras. 1977’s Pink Flag is expanded to two CDs, while 1978’s Chairs Missing and 1979’s 154 grow to three discs apiece. Each is accompanied by an 80-page hardback book the size of a 7in single, which is filled with interviews and sleevenotes from Jon Savage and Graham Duff and excellent, mostly newly uncovered photos from official band photographer Annette Green.

Freshly remastered, the albums themselves still thrill. Pink Flag, oikish punk rock with a pack of Brian Eno’s Oblique Strategies cards in its back pocket. Chairs Missing, a hallucinatory blend of post-punk melody and art-school surrealism. And finally, 154: sophisticated, enigmatic, extremely European. Arguably, the least essential of these expanded editions is Pink Flag, if only because its additional content diverges least from that which made it to the final LP. The lion’s share of the bonus tracks are yielded from six demos that the group recorded for EMI, and while it’s interesting to hear work-in-progress takes on “Reuters” and “Ex Lion Tamer”, the elements – Colin Newman’s insouciant hooligan drawl, grinding electric guitars, Robert Grey’s drums beating like an  angry metronome – remain broadly the same.

Chairs Missing is where things get interesting. This was Wire’s flowering as a studio group, marking their first real experimentation with sequencers and synths. In Graham Duff’s informative sleevenotes, he quotes Newman talking about “the dream sequence”, band parlance for the moments where a song got suddenly, psychedelically, strange – a tactic he points to in “Sand In My Joints”, the vocal debut of bassist Graham Lewis. A very substantial 32 bonus tracks explore the album’s fastidious groundwork. It’s fascinating to see some of the finished LP’s more outré, synthesised pieces delivered as Pink Flag-style thrashes. There are also a handful of demos that remained tantalisingly undeveloped – angular new-wave charges like “Culture Vultures” and “It’s The Motive” prove Wire were discarding the sort of material other bands would hold close. Mind you, nothing was entirely forgotten. Another demo here, “Underwater Experiences”, finally found finished form on 2013’s Change Becomes Us.

Come 154, Wire had exchanged their punky pop-art concision for something more open-ended and conceptual, with multiple – and often competing – voices in play. The demo material proves just how profoundly they – aided by producer Mike Thorne – would reshape songs in the studio. “The Other Window” began life as a familiar punky thrash, Newman relating an existentially gloomy tale of a foreign train journey (“The seat was hard/The carriage fetid…”). By the time it made it to 154 itself, though, it had become a haunting soundscape with a sombre spoken-word vocal by Bruce Gilbert and drums looped in from another album track, “Single KO”. It wasn’t all about queering the pitch, though: the demos of “A Mutual Display” and “Map Ref. 41°N 93°W” – a dazzling airborne travelogue that became the album’s first single – show how Wire had become adept at using the studio to transform already finely wrought songs.

Additional here are a handful of tracks released around and just after 154, when they had been released from their EMI deal. “A Question Of Degree” and “Our Swimmer” are poppier than almost anything on 154, showing off the band’s interest in forward propulsion. The abrasive, noise-strafed “Former Airline” gives a glimpse of the difficult territory Wire would venture into in the ’80s, while “Go Ahead” turns an arch sarcasm to the music industry that had tried – and failed – to market a band as innovative and unusual as Wire. Even today, 40 years after these records were released, they still have the capacity to bewilder. But if listening to Wire can sometimes make you feel like you’re struggling to keep pace, it’s still a thrill to follow in their slipstream.