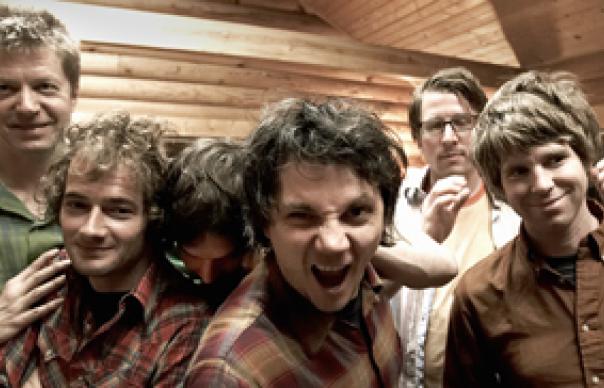 On Sky Blue Sky, Jeff Tweedy peels back the thin epidermis protecting his well-scarred emotions, to reveal a lonely figure torn between the poles of his desire for the completeness of romantic union, and his inclination towards solitude – a conflict he realises is torpedoing both his happiness and his chances of sustaining a relationship.
Hang on a moment, haven’t we been here before? Isn’t this Yankee Hotel Foxtrot all over again? And, for that matter, A Ghost Is Born?

Well, in a way it is. Tweedy’s compulsion to examine his own emotional landscape, and to share the results with his audience, makes him the closest modern equivalent of the Laurel Canyon confessional troubadours, particularly James Taylor, Joni Mitchell and Jackson Browne. So it’s appropriate that the musical landscape Wilco creates for Sky Blue Sky is for the most part a retro-repro version of the comforting, balmy tones of the early-’70s Asylum sound, full of gentle, easy-going strummage, limpid lead-guitar fills and lustrous curls of lap-steel.

Which is a slight disappointment, as on recent albums the band had been shifting towards a more exploratory style (one thinks of the 11-minute Neu!-beat exercise “Spiders” and the even longer, slowly imploding noise piece “Less Than You Think”, both from A Ghost Is Born) that threatened to tug their core country-rock into intriguing new areas.

So instead of any startling left-turns, these songs are more likely to lead to guitar fills reminiscent of Neil Young (on “Hate It Here”) or the classic Allman Brothers dual strike force of Dickey Betts and Duane Allman (“Impossible Germany”) – pleasant enough in themselves, though one wonders if Tweedy’s musical wanderlust is completely satisfied with this restricted approach, whose restraint and desire to please mirrors the conciliatory lyrical tone. By the time one reaches the concluding “On And On And On”, with its resolution to persevere and endure, it’s rather like observing someone attain the 12th step of a therapy programme: they may emerge more stable and centred than before, but there’s a nagging edge of melancholy for what has been lost.

UNCUT: How did you arrive at Sky Blue Sky’s mellow sound?
TWEEDY: It’s really a lot of unspoken playing together, and finding what material we gravitate towards. When
I listen to it now it sounds
like the common ground between all of our different backgrounds. There’s a very large section that’s rooted in an earlier period of rock, that was formative for all of us.
Which period?
Late-’60s, early-’70s music. I don’t think there’s any retro-active spirit to what we were doing, but it was a way for us to communicate. It’s a pretty large group, so the arrangements came out really song-oriented. The shapes seem more classical.
Are you surprised when people compare it to Fleetwood Mac?
Yeah! I don’t get that. Wilco records come wrapped in all these expectations, that bleed over from the previous record, and that’s not the way we have ever operated.