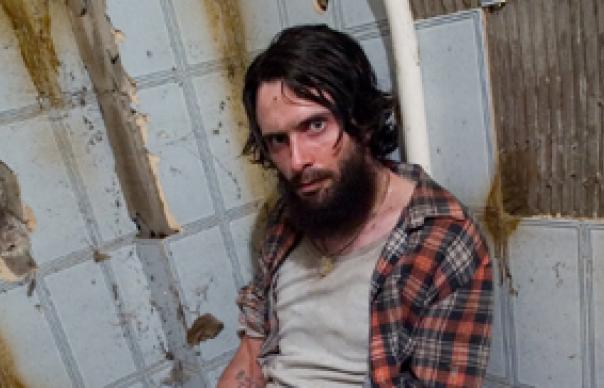 Certainly, Bandytown’s own website treats White as a local celebrity, and you can read all about Jesco “and his outrageous family!” rather incongruously as things turn out, in the site’s Just For Fun section. But, perhaps incredibly, White’s fame has spread far beyond the Appalachians: fans include Beck and Hank Williams III, he’s appeared in an episode of Roseanne and, incredibly, been the subject of four documentaries and one film.

So, what is it that’s got Hollywood and the cool kids so excited about Jesco White? Perhaps, you might argue, his Mountain Dancing – a kind of tap – affords some in the rarified confines of the big city the opportunity to make gentle fun of country folk and their traditions. But the hook, it seems, for Moretti and Smith are the lurid instances of murder, drug abuse, depravity and mental illness that litter White’s life story.

It may come as no surprise to learn that White’s known as “The Dancing Outlaw” – and this is certainly the angle Moretti and Smith, and the film’s director, Dominic Murphy, riff on most conspiuously. White Lightnin’ pitches itself hysterically between a redneckploitation flick and a 70’s horror movie.

This, then, is not your conventional music biopic. In fact, it’s increasingly hard to know what’s fact or fiction about White’s life as Murphy’s film unfolds. Certainly, it’s true that he was raised in grinding poverty, and that his father – Donte Vixen Ray White, or D Ray – was a legendary Mountain Dancer in his own right.

As a child, Jesco huffed petrol fumes, shot speed and spent time in and out of reform school. Jesco’s troubled, violent adolescence is soothed through Mountain Dancing and his father’s support. These sequences are all shot in flashback, Murphy using in a low-saturated palette that resembles a sepia tint.

Arguably, the two key events of White’s adult life are the murder of his father, in 1985, and an encounter with Cilla, an older, married lady who Jesco at first intends to rob but instead persuades to leave her husband and come live with him. Together with Cilla, he takes his Mountain Dancing out on the road, and the couple find stability, of sorts. But violence, it seems, is never an entirely distant proposition; one scene in a bar, where Jesco suspects a patron of hitting on Cilla, threatens to turn very nasty very quickly.

In fact, it’s this tension bubbling away through White Lightnin’ – enhanced by a dissonant, paranoia-inducing score from Yeah Yeah Yeah’s guitarist Nick Zinner – that channels the film towards a violent third act eruption. Which is where you start to suspect White Lightnin’ drifts away from the facts.

Jesco begins to believe he’s some Biblical force of vengeance and sets out to track down his father’s murderers, who’re still on the loose. Here, the film switches from the anti-Walk The Line into a gruesome revenge film. As a wild-eyed, scraggly and unhinged Jesco pursues the terrified killers through the dense Appalachian woodland, armed with hammers, chicken wire and razor blades, you might be reminded of the curdled hillbilly horrors of Tobe Hooper or Wes Craven.

But, unbelievably, it doesn’t end there. Jesco holes himself up in a remote cabin and begins to cut parts off himself, which he eats believing it will cleanse his sins. It’s shot in wild, hallucinatory jump cuts, and most closely resembles the more psychedelic moments of Jodorowsky’s films (who, incidentally, Dominic Murphy once made a documentary on).

In some ways, as the film hits its final stretch, it’s hard to tell quite what we’re watching. Is this a study of madness, or a bunch of snarky hipsters mocking hillbilly stereotypes? It’s certainly carried seriously enough by a formidable performance from British actor Edward Hogg, who arrives on screen in a whirl of sweat and delirium. You might detect, though, some sense of wry amusement as the film cartwheels towards its over the top finale from Carrie Fisher, gamely playing the over-sexed Cilla.

It reminds me, to some degree, of Nicolas Refn’s Bronson, from earlier this year – another film that took the life story of a seriously troubled figure and presented it in a deeply unconventional but no less thoroughly memorable manner.