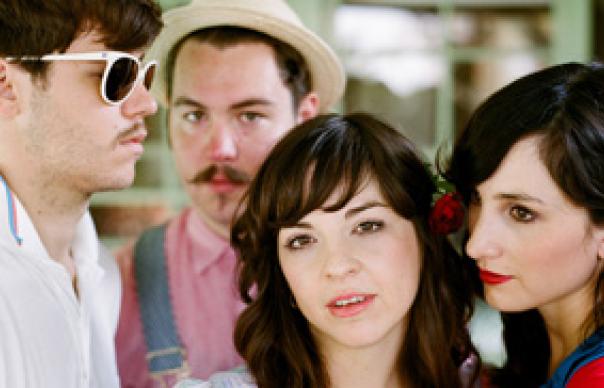 Fast forward to early 2008 and Whispertown 2000, now a four-piece, had opened for Rilo Kiley and Bright Eyes across the US, self-released a decent-selling debut LP and impressed Gillian Welch so much they became the first signings to her Acony label. Lewis calls Nagler her favourite songwriter and Conor Oberst, another uber-fan, has likened her angular, country-leaning songs to “old Chinese proverbs”.

A cursory listen to this second album is enough to realise it’s not just mere hype. Swim is the kind of record you wish people made more often: rural music played by suburban kids with an intuitive feel for the unruly punk heart of old-time country. Nagler’s expressive voice has a baleful twang that shunts these songs – some with the most minimal of arrangements, some like ragged revivalist hoedowns – into the same lugubrious territory as Bonnie Billy or Oberst himself. It’s a ploy that cleverly subverts itself on “Lock And Key” and “From The Start Jamboree”, where their own communal folk shanty is appended by a foggy mountain breakdown that’s part Bill Monroe, part Silver Jews. They’re experimental too, prone to sudden squalls of guitar, weird electronic bits and even weirder whistling noises that sound like some spectral tribe hooting an advance across the Virginia hills. In the case of “Erase The Lines”, all within the same song.

Nagler’s more famous chums are here too, albeit in subtle form: Lewis and Welch adding hushed harmonies to the icy, piano-led ballad, “Atlantis”. But this is a disquieting, spiny record that ultimately stands on its own. 2009 may well be a big year.