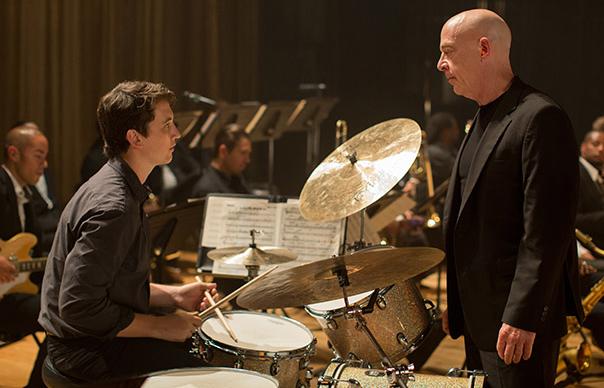 No, not a drama about the travails of personal injury lawyers, instead Damien Chazelle’s film charts the sadomasochistic relationship between aspiring 19-year-old drummer (Miles Teller) and his authoritarian professor (JK Simmons) who runs a jazz ensemble at a swish New York conservatory. Whiplash takes its title from a piece by jazz composer Hank Levy, which here the two principals wield in battle against each other.

Simmons’ black-clad, bullet-headed Fletcher dispenses emotional and physical brutality against Teller’s Andrew Nieman, driving his pupil with the lacerating skills of an army drill sergeant. The sullen Nieman, for his part, is weirdly complicit in this: it becomes apparent that he is concerned not so much about an appreciation of music, but about pure, competitive ambition. Andrew doesn’t appear to listen to music himself, nor does he jam or otherwise engage with his fellow students; there are no rambling, discursive chats over beers or coffee about favourite recordings or artists.

At this point in the run-up to awards season, Simmons performance – like those by Michael Keaton in Birdman and Steve Carell in Foxcatcher – is time-honoured Oscar bait. Indeed, judging by yesterday’s nominations, it’s paid dividends. A warm and likeable character actor in films like Juno and the Coens’ Burn After Reading, he raises his game here, playing the seething, snarling Fletcher with tremendous focus and commitment. Fletcher’s rehearsal room is a snake pit, where a late appearance or a bum note will end in a litany of profane abuse from Fletcher; or perhaps dismissal from the group.

Whiplash doesn’t especially offer any insight into either music or the nature of genius; it’s a rather dark film about the all-consuming nature ambition and a particular brand of ruthless perfectionism. It’s the antithesis of aspiration Glee!-style shows about fame academy kids who just… wanna… sing! You suspect they wouldn’t last five minutes in the blood and sweat of Fletcher’s rehearsal room.
Michael Bonner