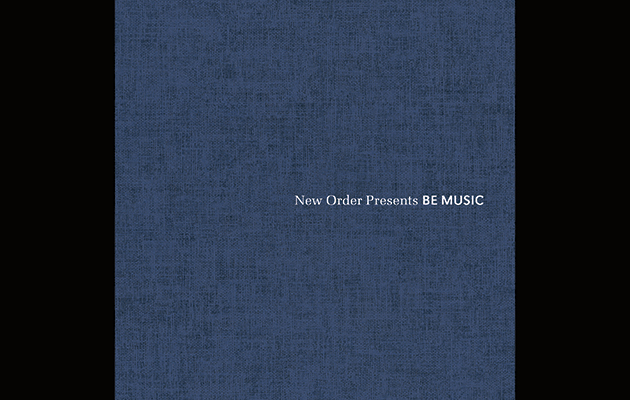 Back when New Order were still anonymous, “Be Music” was the alter ego behind which they hid when they took on producing jobs for other acts on Factory and its associated labels. Peter Hook was the first to activate the tag, late in 1981, when he manned controls for “Death Is Slowly Coming”, the bleak B-side of Stockholm Monsters’ debut single. But it was after New Order split from Joy Division producer Martin Hannett, and split their own atom by becoming self-producers with the eternal “Temptation” in 1982, that Be Music productions really bloomed.

Between 1983-’85 (ie between “Blue Monday” and Low-Life), all four members of New Order would employ the pseudonym for a wild variety of projects, taking unpaid production jobs partly to help other Factory signings – offering technical knowledge of synthesisers and programming, and often lending the equipment itself – and partly to try out their new gear and new ideas on other people’s records.

This 3CD, 36-track box (also available as a 12-track double LP) isn’t the first time Be Music productions have been gathered together: two collections, Cool As Ice and Twice As Nice, appeared in 2003 and 2004. But it’s the first time that, anonymity be damned, New Order’s name has been stamped up front. In a sweet but emphatic touch, the new compilation also spiritually extends the Be Music brand beyond the years it existed, expanding to include both recent work – Stephen Morris’ remixes for the likes of Factory Floor – and earlier family explorations, including “Knew Noise”, one of three tracks Ian Curtis and Joy Division/New Order manager Rob Gretton co-produced in 1979 for Section 25’s debut single.

During Be Music’s adventurous 1983-’85 prime, Bernard Sumner dived the deepest and came up with the most lasting results, and his work dominates the first disc. (Hook is represented by “Fate/Hate”, the second single by future music journalist Paul Trynka’s Nyam Nyam, to whose Hull post-punk he applies a roaring Moroder patch.)

Working often with A Certain Ratio’s Donald Johnson as Be Music-Dojo, Sumner shaped three classic singles almost everyone in the UK ignored at the time, but which stand as significant markers in the development of electronic music, even though each signposted an entirely different way forward: 52nd Street’s “Cool As Ice” (1983), the UK’s first electro-funk, quickly adopted by New York’s club underground; Marcel King’s “Reach For Love” (1984), sad, sweet, soul wrapped in a machine mesh; and the magnificent megamix of Section 25’s “Looking From A Hilltop” (1984), a glistening thing of backwards drums and synths, dazed vocals, soul sonic force and Kraftwerkian drive wrapped around psychedelic Blackpool melancholia. It still sounds like nothing else.

Between these milestones, Disc One shines light on honourable fellow travellers: in particular, Sumner’s augmented, extended finale to ex-Josef K man Paul Haig’s “The Only Truth” (1984) is revealed as a not-bad-looking distant cousin of “Temptation”.

Disc Two pays tribute to New Order’s Bogart & Bacall, Stephen Morris and Gillian Gilbert. They helmed Be Music’s furthest-out undertaking, Too Crazy Cowboys, the 1984 debut LP by Thick Pigeon (formed around actress-musician Stanton Miranda and future Coen Brothers composer Carter Burwell), represented by “Babcock + Wilcox”, a collision between New York art anti-pop and thin, spooky, handmade electronica. But with their more recent remix work, this disc casts The Other Two against type as New Order’s hardest edge, underlining how Morris has kept the flame burning for his earliest influences, traces of Can and other elektronische brethren. Best of all is Stephen and Gillian’s own “Inside”, rescued from a 2011 EP, a gleaming, jagged slab of propulsive Blade Runner motorik.

Disc Three is more ragbag, gathering odds, ends and remixes ranging from the great (Sumner lending an “Everything’s Gone Green” tinge to the sequencer swarms of Section 25’s “Sakura”) to the terminal (Factory supergroup Ad Infinitum’s excruciating “Telstar” cover). Important here is the inclusion of the full 22-minute “Video 586” from the days when New Order were trying to persuade machines to play endless encores, and the prototype for both the Power, Corruption & Lies track “586” and “Blue Monday”.

The majority of tracks point back to the fertile, swampy era when New Order were DIY-ing the future by cross-mixing guitars, Euro experimentalism, early hip-hop’s minimal electro and whatever else sounded good. It was in this period, in 1982, The Haçienda opened, and although the club is associated with its acieed-drenched Madchester heyday, this set suggests more interesting music was being played and made before then, when the dancefloor was half-empty. Not every track is killer, but even the filler fascinates. Confusion reigns.

Q&A
SECTION 25’s VIN CASSIDY
“Knew Noise” is this compilation’s earliest track. How were Ian Curtis and Rob Gretton as producers?
Well, it was Rob and Ian’s idea to get us into a studio. They didn’t have a great deal of studio experience – but they had more than us. Looking back, I suspect the Cargo studio owner, John Brierely, did most of the nuts and bolts. But Ian brought equipment, a syndrum Steve Morris hadn’t had long, and they were interested in going to town on various aspects. But it wasn’t until we did [debut album] Always Now with Martin Hannett that we discovered what it was like to work with “A Producer”.

Bernard Sumner produced 1984’s From The Hip. How did he compare to Hannett?
Obviously, lots of people have complained Martin was dictatorial. But our attitude was always: if you’re going to get a producer in, let them produce. But, yeah – it was much more democratic with Bernard.

More of a collaboration?
Yeah. We’d jammed with Bernard a lot at our home studio in Blackpool, we could bounce ideas off each other. When we went into the studio to record, we didn’t have enough tracks, and we improvised the track “Inspiration” 50-50 between the band and Bernard. We were mates as much as anything. We recorded at Rockfield Studios in Monmouthshire. It was way out in the hills, and at the back there was a pond, and on the last day we all went skinny-dipping. You couldn’t have done that with Martin…
INTERVIEW: DAMIEN LOVE