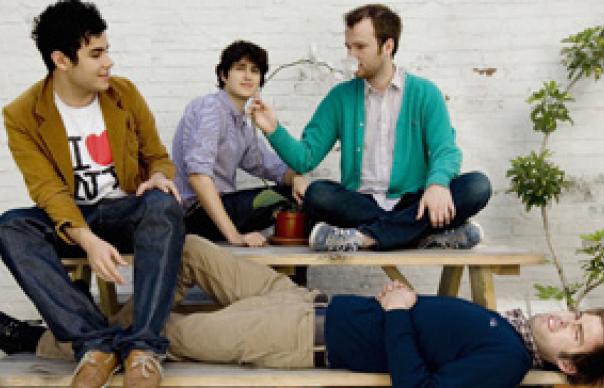 It’s almost ‘de rigeur’ for a debut album to convey anti-authoritarian attitude, and that by Vampire Weekend is no exception. However, rather than The Man, the government, or even the parents, this is a band who save their disdain for the punctuation. “Who gives a fuck about an Oxford comma,” frontman Ezra Koenig declares in “Oxford Comma”. “I’ve seen those English dramas too…”

This, self-evidently is not the work of a studiedly cooler-than-thou group. If history has taught us to find the archetypal New York band slouched in an alley, Vampire Weekend seem more likely to be found upstate in the Hamptons, reading novels on a yacht. Refusing to conform to rock archetypes, even styles – like Brooklyn neighbors Dirty Projectors and Yeasayer their debut features African flavours – VW show themselves possessed of great strength of character, unafraid to wear their hearts, or their intelligence on their sleeves.

Duly, punctuation is not the only unexplored territory which the Columbia University graduates set out to claim as their own here. From neo-baroque revival architecture (“Mansard Roof”) to types of Congolese music (“Cape Cod Kwassa Kwassa”), Koenig’s songs originate in some decidedly left-field subjects, without Vampire Weekend ever becoming wacky. Though undoubtedly collegiate, this is far superior to what we’ve come to know as “college rock”.

Instead, the band play a smart, sometimes shy, but still curiously hip indie, which has steadily gathered heat through 2007. The band have described it as “Upper West Side Soweto”, and “A-Punk” nicely shows why. Just as impressive, though are “Campus”, where they come across like a coyer version of The Walkmen, “M79”, a chamber pop classic redolent of The Kinks, or “Walcott”, which could be an affluent Clinic.

Throughout, the songs serve a pertinent reminder that Americana can be as much Scott Fitzgerald as Hemingway, and comprise white collar anthems aswell as blue. Cosmopolitan, anglophile, afrobeat – Vampire Weekend are in an Ivy League of their own.