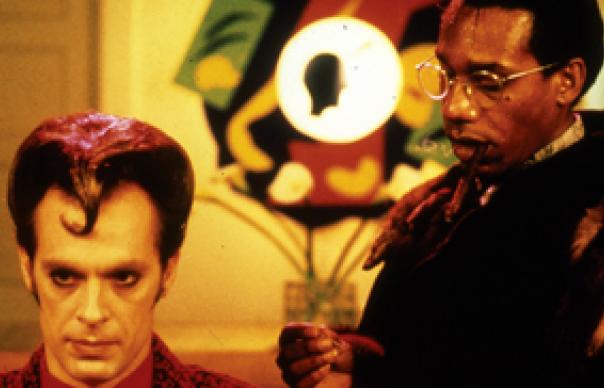 Alan Rudolph, who wrote and directed Trouble In Mind, started in films as an assistant to Robert Altman on The Long Goodbye, California Split and Nashville, and also wrote the screenplay for Altman’s Buffalo Bill And The Indians. The iconoclastic signature of his mentor was writ large on the films Rudolph went on to subsequently direct and usually write, among them movies as kaleidoscopic, poetic, whimsical and romantic as Welcome To LA, Chose Me, Made In Heaven and Love At Large, the latter two films incidentally finding eccentric roles for Neil Young.

Trouble In Mind, originally released in 1985, is a movie that speaks to us in the language of movies and what we know about them, notably westerns and film noir. It reaches us, like so many of Rudolph’s films, from a world entirely of his own imagining, not a ‘real’ place as we might conventionally describe it, but still wholly convincing and emotionally sincere enough for us to deeply care about the characters who congregate within its mysterious, hugely stylised atmospheres.

It’s set in the fictional American metropolis of Rain City (actually, Seattle), and seems to be set in some uncertain future, although everyone acts and talks like they’re in something hardboiled from the ’40s. It’s a grim and disturbing place. There are strange soldiers on the streets, some kind of militia. Troop carriers are parked strategically on major intersections, jeeps with high-calibre machine guns roar by, any evidence of civil disobedience is harshly dealt with. There are riots everywhere and cryptic slogans, like messages out of Pynchon’s fiction, are plastered wherever you look. For lurking reasons, people in highly strung situations, usually involving guns, start barking at each other, nastily, teeth-bared, in Korean.

The film opens with the release from prison of former cop John ‘Hawk’ Hawkins (Kris Kristofferson), who’s just done hard time after gunning-down Rain City mobster Fat Adolf, for reasons of love and honour we only later discover have something to do with old flame Wanda (Geneviève Bujold), to whose diner, Wanda’s Café, he immediately heads. Hawk is one of cinema’s great loner heroes, laconic and resolute. He wouldn’t be out of place in the westerns of Anthony Mann, Howard Hawks, Ford, Peckinpah or Eastwood. Equally, you wouldn’t be surprised to find him on pages written by Chandler or Ross MacDonald and you’ll certainly think of Hammett’s Continental Op.

Almost as soon as Hawk arrives at Wanda’s, so do homeless couple Coop and Georgia (Keith Carradine and Lori Singer). Coop’s had it with being poor and unemployed and treated like a chump – he’s ready to do anything for money. He falls in with one of Wanda’s regulars, Solo (Joe Morton, from John Sayles’ Brother From Another Planet), a black gangster given to reciting angsty poetry. Pretty soon, Coop’s running around in day-glo zoot suits, war paint and increasingly incredible haircuts, taking weird little pills and ripping off the wrong people, which brings him and Solo into potentially fatal confrontation with crime boss Hilly Blue.

The part of Hilly, Rudolph recalls in a brief interview, might logically have gone to a screen heavy like Lee Marvin. In a stroke of casting genius, however, Rudolph offered the role to transvestite actor Divine, probably most famous for eating dog shit in John Walter’s Pink Flamingos. Lee would’ve been good, but Divine is sensational, lethal dapperness personified in his smart Tommy Nutter threads, as glibly menacing as a Bond villain.

While Coop’s out raving, looking wilder every time we see him, Georgia’s falling in love with Hawk, who’s equally obsessed with her as a waif princess in whose service he finally will be prepared, if the shooting starts, as it surely does, to die. Wanda watches all this unfold, as you suspect she has watched many such things unfold, with unkempt compassion, Bujold witheringly beautiful in her chosen seclusion, spending evenings in her parlour, a small religious shrine on a dressing table, a pump action shotgun permanently to hand – in case of what, who knows?

The film’s ending is luminously ambiguous, Kristofferson driving into snow-capped mountains, wounded after a final shoot-out (a mix of Walter Hill’s point-blank ferocity and Three Stooges slapstick). He appears to be alone, dreamily reminiscent of Joel McRae in Peckinpah’s Ride The High Country. As Marianne Faithfull’s mournful theme song comes up on the soundtrack, a hand reaches out to caress his face…