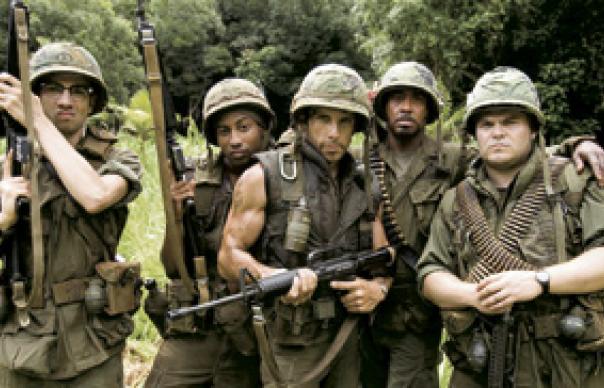 Ben Stiller‘s first film as a director since 2001’s Zoolander is a brilliant film-within-a-film. Shooting Vietnam epic Tropic Thunder in the jungles of South East Asia, a group of preening actors find themselves caught up in a real war of their own. This becomes, then, the true story behind the most expensive fake war movie ever made???

At face value, the makers of Tropic Thunder would have us believe they’ve made a blisteringly funny comedy about what happens when the shoot for a Vietnam movie goes dreadfully wrong. But, in case that’s just too simple a proposition, this is also a post-modern deconstruction of the filmmaking process, a mischievous satire on the vanity of actors and a sharp dig at the rapacity of Hollywood studios. If it sometimes feels like Tropic Thunder gets carried away on its own high-vaulted ambitions, then rest easy: it has arguably more in common with a Charlie Kaufman movie than the self-reflexive histrionics of The Last Action Hero.

Tropic Thunder itself is a memoir by Vietnam veteran John ‘Four Leaf’ Tayback (Nolte) that details a suicidal mission into the jungles of South East Asia in 1967 from which only a handful of his platoon returned alive. This, in turn, is being filmed by British director Damien Cockburn (Coogan), with a cast including action hero Tugg Speedman (Stiller), comedian Jeff Portnoy (Black) and multiple Oscar-winning Australian actor, Kirk Lazarus (Downey Jnr), a keen Method advocate, whose determination to inhabit his character has led him to undergo “pigmentation alteration surgery” to play the platoon’s African-American sergeant.

As our film of Tropic Thunder opens, their film is five days into shooting and already it’s a month behind schedule and a hundred million dollars over-budget. Amid threats from the studio to shut down the movie, and clearly fed-up with the prissy narcissism of its stars, Cockburn and Tayback conspire to abandon Speedman and the rest of the cast deep in the Vietnamese jungles – there best to “know fear”, as Tayback puts it – with cameras hidden in the foliage to film them, guerilla-style, for the finished movie. Inevitably they find themselves lost in-country, but our stars are so self-absorbed they fail to notice the local heroin cartel are chasing them, believing them to be DEA agents. At which point, this send-up of war movies deliberately succumbs to the broader conventions of the genre.

The trick Stiller and co-writers Justin Theroux and Etan Cohen pull off is the artful way they telescope in and out of their metatextual hijinks. You may have seen online, for instance, Rain Of Madness – a fake, Hearts Of Darkness-style documentary about the making of Cockburn’s Tropic Thunder film, directed by Werner Herzog analog Jan Jurgen. And before Tropic Thunder itself begins, we?re treated to a series of trailers featuring Speedman (a Stallone-style actioner, Scorcher VI), Portnoy (a gross-out franchise called The Fatties: Fart 2, with Portnoy playing multiple roles a la Eddie Murphy in The Nutty Professor) and Lazarus (worthy gay priest drama, Satan’s Alley).

On top of that, the cast has their own websites, with lengthy biographies, filmographies and movie trailers. This is all very richly textured detailing around the central conceit of the film, but wisely Stiller’s doesn’t let it disrupt the narrative drive. In fact, the closest the film comes to articulating its own febrile metatextuality is when Lazarus exclaims: “I’m the dude playing the dude disguised as another dude!” It’s certainly Downey who most conspicuously embodies the tricksiness of the film’s proposition. Here’s an American playing an Australian who’s so preposterously committed to his character he’s undergone surgery for the part to resemble an African-American. It’s audacious certainly – and, arguably, not a little provocative – but I can’t think of any other actor apart from Downey who could carry it off with such brilliance. And as the platoon of actors find themselves in increasingly perilous circumstance, they begin to adopt the personas of their characters; Lazarus’ Sgt Osiris assuming gruff command of the squad while Speedman’s Tayback becomes a flinty-eyed (and hysterical) Rambo figure.

Of course, you might imagine that there’s nothing more self-indulgent than watching actors playing actors. Or, indeed, that jokes at the expense of Hollywood might seem injudicious from people who’ve made a comfortable living there. But the targets are broad enough not to be exclusive. We learn, for instance, that Speedman?s last lead role prior to Tropic Thunder was as the developmentally stunted title character of Oscar-bait drama, Simple Jack – for which he failed to even get an Academy nomination. The joke, rather mercilessly, is in the way actors can achieve critical kudos from playing a certain type of role – something you’d be familiar with if you’ve seen Forrest Gump, Rain Man or I Am Sam. And, frankly, that Speedman is a shit actor and the footage we see of Simple Jack is simply awful. Later, Lazarus rather pompously declares, “I don’t read scripts, scripts read me,” – the kind of phrase familiar to anyone who’s sat through an Actor’s Studio-style interview with any of the more self-regarding members of the movie community.

There is one, final, jaw-to-the-floor swipe at Hollywood: the astonishing casting of Tom Cruise in a fat suit and bald hairpiece as a bullying, foul-mouthed studio exec. Cruise is extraordinary here – a toxic ball of cruelty and cynicism. When it looks like one of the actors might not make it back alive from Vietnam, he snarls: “We’ll weep for him. In the press. And set up a scholarship. And in the fullness of time? we’ll file an insurance claim.?

Quite what his fellow parishioners at the church of Scientology will make of this, only L Ron himself knows.