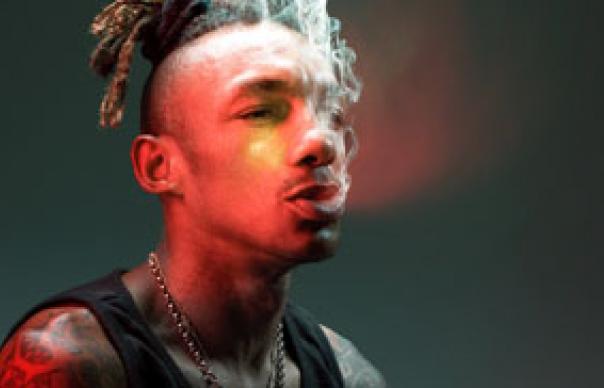 2008 has been the year that the much-maligned sub-genre of trip hop was reborn, its leading practitioners returning to the public eye, heralded like long-lost war veterans. Massive Attack have taken over London’s South Bank Centre to curate the Meltdown festival; Portishead have released the finest and most uncompromising album of their career; now fellow Bristolian Tricky is back with his best album in at least a decade.

The irony is that where Portishead’s Third – with its paranoid sonic barrage of primal drones, arrhythmic bumps and discordant squeals –attracted critical praise, those exact tropes garnered Tricky critical opprobrium a decade ago. His 1998 album Angels With Dirty Faces saw him laying bare his fury, paranoia and night terror, and matching it with a suitably creepy and dislocated musical backing. It alienated fans of Tricky’s solo debut Maxinquaye, and since then his albums have been a messy compromise of mainstream US hip hop, heavy rock and tinkering where even he sounded bored.

Five years after the damp squib that was Vulnerable, Tricky returns with Knowle West Boy, a concept album named after the Bristol neighbourhood where he grew up. For the man who has spent more than a decade in New York and then Los Angeles, it’s a strangely nostalgic and fondly remembered account of his “white trash ghetto”. It sees him doing what he’s always done – putting a host of punk, dancehall and hip hop influences through a skunk-addled filter – but this time those influences have been reassembled in a much more coherent way.

Gone are the dark, monochordal dirges, to be replaced by proper, well-structured songs – and a much needed splash of sunlight. It’s as if the exiled Tricky is looking upon the signifiers of his childhood – dole queues, council housing, social decay – with a sense of pride and longing. Absence, in this case, clearly makes the art grow fonder.

The opening track, “Puppy Toy”, is Tricky taking the piss out of himself, a swaggering, major-key blues shuffle set in a Bristol pub where an obnoxious drunk (played by Tricky in a Barry Adamson-style baritone narration) tries it on with a younger girl (played by Alex Mills), who gives as good as she gets. “C’Mon Baby” is another tale of failed courtship, an Aerosmith-style stomper undercut by Tricky’s self-loathing persona. “School Gates” is a grim (and apparently true) tale of teenage pregnancy, told from the male and female points of view, but even this Ken Loach-style social realism is given an uplifting emotional gravitas by the use of the same 6/8 guitar vamp as John Lennon’s “Working Class Hero”.

Best of all is the lead single “Council Estate”, a football terrace chant set to a thrilling digital punk racket. At the end of each chorus, after Tricky wails about the joys of childhood hooliganism (“you can be who you be ’cos you’re not who you are/remember bwoy you’re a superstar”), the wall of distortion drops out to reveal a series of metallic judders and a ghostly, shivering, female voice, the flipside of that anti-social delinquency.

The album also revisits Tricky’s golden age. There are strong female voices offering a counterpoint to his dystopian mumbles (particularly on the coma-paced “Past Mistake”, which features the French Moroccan singer Lubua, and on the glam rock stomper “Veronica”, which features the Italian vocalist of the same name); there is a curiously punky take on ragga (witness “Bacative” and “Baligala”, which feature Jamaican New Yorker Rodigan on vocals); there is also a hilariously inappropriate cover version (in this case, Kylie’s “Slow”). But the cover version here betrays a telling change of direction. The man who subverted Public Enemy’s “Cold Steel”, Eric B & Rakim’s “Lyrics Of Fury” and The Cure’s “Love Cats” by getting young women to sing them here does the exact opposite with “Slow”; Tricky plays the rock pig, transforming Kylie’s ethereally sensual lyrics into sleazy boasting. It’s as close as he has ever got to a joke.
JOHN LEWIS