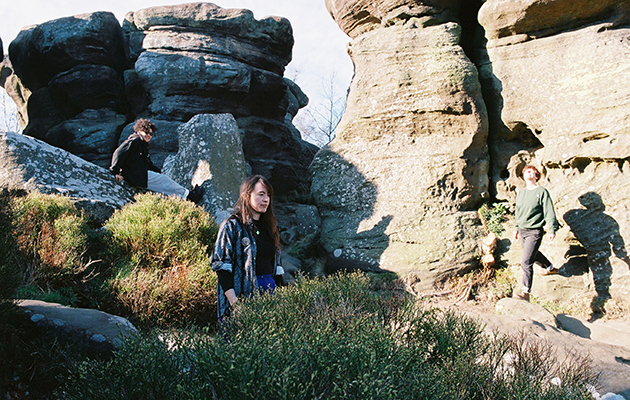 For a good decade now, London trio Trash Kit have been mining a very particular, streamlined sound – chipped, full of nervous, jangling energy, yet somehow symmetrical. Their first two records were packed with tightly interlocked songs, ticking and clock-wound, which sometimes came across, at first blush, as similar to The Raincoats, Y Pants or Pulsallama.

But comparisons to post-punk pioneers has always felt a little reductive, particularly when Rachel Aggs busts out one of her winding, circular guitar riffs, which sit closer to chimurenga or other types of South African popular music. You can hear this web of inspiration in Aggs’ other groups, too: in both the jittery, twisted songs of Shopping, and the refreshingly spare pop of Sacred Paws, Aggs’ distinctive playing and voice are at the core of the music’s character.

She’s one of the central figures in the London DIY underground that Trash Kit and Shopping are both part of, though it’s important to note that the politics of this loose collective of musicians seem to be more about the communal than the singular: about decentralisation, about claiming space for marginal and othered voices. Indeed, all of the members of Trash Kit, including their new bass player Gill Partington, are involved in other projects that align, somehow, with this scene – Partington and Horwood also play in Halo Halo; Horwood is a member of great bands like Bamboo and Bas Jan.

It’s a refreshingly pluralistic scene, then, open to experimentation and play, and connected with other similar DIY gangs, such as Glasgow’s underground; indeed, the other member of Sacred Paws, Eilidh Rodgers, lives and works in Glasgow. And much like the other groups in their orbit, Trash Kit are fiercely independent, but never twee and “indie”, and they seem to have learned the best lessons from precursors like The Pastels and Huggy Bear about staying true to a strongly held set of ideals, while still being open and alive to the moment, to possibility.

Their debut self-titled effort was released in 2010, a year after the group formed, and it saw the group’s then-core membership of Rachel Horwood (drums, voice), Rachel Aggs (guitar, voice) and ex-Electrelane member Ros Murray (bass) spitting out pithy, shard-like bolts of lightning. A second album, 2014’s Confidence, found them starting to breathe out, the songs opening up, with Verity Sussmann joining  in on saxophone for a few songs.

The latent possibilities hinted at on those LPs are writ large across the 11 songs on Horizon. It’s striking to hear just how confident the trio now are, and how interwoven their playing is; no mean feat when the songs are structured around long, sometimes meandering lines of thought, unspooling threads of melody and counter-melody, polyrhythms skittering across the stereo spectrum. Opener “Coasting” stretches out languorously, Horwood’s clattering drums subtly insistent and Aggs’ guitar weaving out a joyous, fleet-footed riff as Partington’s bass negotiates further intricacy, while the introduction of strings toward the end of the song gives its coda a sweeping gait. Aggs’ guitar in the following “Every Second” is tightly coiled, the better for sudden interjections of saxophone to curl around and nestle between the trio’s attenuated playing.

That opening riff is one of Aggs’ clearest gestures toward her love of South African pop. She’s talked previously about wanting to avoid “strumminess”, and the clean, glittery melodies of artists like Thomas Mapfumo have been core to Aggs’ thinking: “I had been getting into a lot of guitar music from Zimbabwe,” she says, “particularly early Thomas Mapfumo records, where you can clearly hear the progression from mbira rhythms to full-on radio pop… Also Soweto pop and funk really gets me excited.”

What a lot of this music shares is an incessant yet light-footed groove, and a lyricism that works right down to the level of the ensemble’s many interlocking parts; that deceptive simplicity is definitely part of Trash Kit’s remit.

And while, yes, you can still hear their love of post-punk, with some moments recalling The Raincoats circa Moving, or X-Ray Spex, Trash Kit’s palette is much broader still. Ask them what they’ve been listening to recently that might surprise and they’re refreshingly unorthodox: “We’ve always loved bands like Nissenenmondai and OOIOO, who are able to really stretch songs out in this psychedelic but still visceral way,” Aggs says. “And we love The Ex – they do a collaboration/cover version of a Konono No 1 song that we love so much.” You can hear this more expansive, “psychedelic” aesthetic on “Horizon” in particular, a song that strings its many different parts out across the skyline, a set of lights blinking in the night sky, all kinds of subtle details trickling into the song – a clacking woodblock here, one-note blurts of brass there – riding out a riff from Aggs that feels like it could go on forever, an ouroboros continually circling in on itself. It’s completely exhilarating.

There are other, equally thrilling moments too – the hypnotic, streamlined surrealism of “Sunset”, with its simple chants; the devastatingly lovely melody of the following “Get Out Of Bed”, shouted out loud and gorgeous by Aggs and Horwood, which winds down into peaceable, ticking guitar chimes, adrift in a sunlit wash of reverb; the wild ride that is the seven-minute instrumental “Disco”, pushing ever forward, enraptured by its own momentum, before falling apart at the six-minute mark for a convincingly spry stretch of clinking, scratchy free improvisation. (The influence of groups like Dog Faced Hermans, or the Netherlands’ improv-punks The Ex, feels particularly strong here.)

Tellingly, there’s also the choir that Horwood assembled to ground “Sunset” and “Traffic Lights” – the latter’s lyrics summarising one of the album’s, and the group’s, core messages about friendship, musical and otherwise: “We play in tune not touching/We play in time not listening/Your music inside my body/In my heart and my head.”
“I’ve been singing with Jenny Moore’s Mystic Business for a while now and also had the pleasure to sing for Fay Zmija Nicolson’s Spa Songs last year,” Horwood explains. “I don’t think I would have felt confident to try and gather a choir and add the extra vocals [on Horizon] if it wasn’t for those experiences.”

But there’s something in the very sound of the choir on these songs, singing out proud and true, that sums up so much about Trash Kit: a fearlessness; an understanding of the power of collectivised voices; the musicality and creativity of people in their everyday worlds, in real time, bodies and minds in motion.