Father and son entwine koras in a cross-generational celebration... 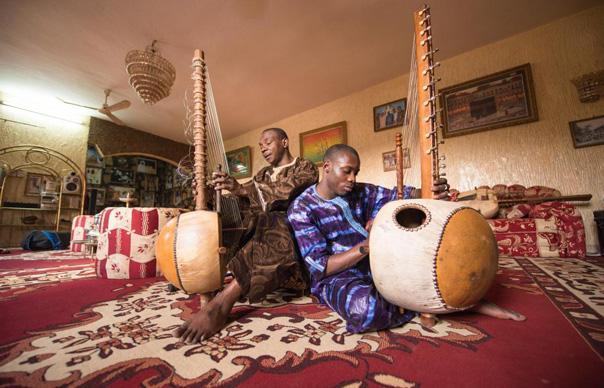 Father and son entwine koras in a cross-generational celebration…

Over recent years we have become to used to pop as a dynastic calling, as assorted musicians with surnames like Dylan, Sumner, Simon, Thompson, Wainwright, Carthy, and Cohen seek to emulate the success of their esteemed parents. In West Africa, such generational transference has long been the norm, enshrined in the role of the griot, who functions as musician, bard, song-keeper, social historian and praise singer. Griots take pride in their ancestry; kora maestro Toumani Diabaté for example, traces his calling back some 70 generations, though ironically his father, himself a fêted kora player, didn’t bother teaching his son the instrument. Nonetheless, Toumani took up the 21-stringed African harp at the age of five, quickly proved himself a prodigy, and has gone on to become its most famous exponent both at home and on the international stage, trailing an impressive roster of albums and cross-cultural collaborations (with Spanish group Ketama, Björk and Damon Albarn among others). In prestige, his younger brother Mamadou, another kora genius, isn’t far behind.

It’s no surprise, then, to find Toumani’s son Sidiki (named after his grandfather) continuing the family trade. In Mali he’s already celebrated in his own right as accompanist to Iba One, the country’s leading hip-hop star, an example of how the role of griot is mutating with new times. “We’re modern griots,” says Toumani, “we live in the city, we’re connected to the world.”

Still, all but one of the 10 pieces on Toumani & Sidiki are traditional numbers, some of them dating back a century or more to Gambia, where grandfather Sidiki grew up (West Africa’s ancient Mande empire crosses current national borders and its griots do likewise). Most are songs, but are delivered here as instrumentals, part improvised during sessions in London in the autumn of 2013.

Confusingly but also appropriately for modern griots, the original pieces have been renamed, so that a wedding song called “Chung Kamaba” now bears the title “Toguna Industries” in honour of an agricultural company that helped Mali’s farmers during the recent incursion of Islamic militants into the country’s north, an event that has provoked and coloured an outpouring of recordings by Mali’s rich supply of musicians – Rokia Traoré and Vieux Farka Touré for instance. “Dr Cheikh Modibo Diarra” is named in honour of a Malian astrophysicist and politician, while “Tijanyi” is a salute to the Sufi strain of Islam to which Toumani and Sidiki are committed. “Tolerance is what’s important,” says Toumani, “Islam came to Mali centuries ago, we don’t need lessons.”

The mood of the album is mostly reflective. It’s a very different creature to Toumani’s celebrated outings with the late guitarist Ali Farka Touré, where the two men sparred in contrasting styles – Toumani’s rippling kora playing against Touré’s clanging, bluesy lines. Father and son play in much more similar fashion, though Sidiki’s lines are usually the more staccato. As on any album of twin guitars, there’s fun to be had deciphering who is playing which part, and in catching the response of each kora to the other’s initiative, and when each kora has said what it wants, the pair are quite prepared to close the conversation; tracks that clock in at three minutes (there are three here) are scarce on modern African albums.

Though everything is touched by a profound sense of melody and the sheer loveliness of its kora cascades, the temper of the pieces shifts subtly. “Rachid Ouigini” (the name of an Algerian historian) is spritely, “Bansang” relies on an almost funk rhythm (“It really grooves,” reckons Toumani), while “Claudia And Salma” (the names of Toumani’s manager’s daughters) is a stately mix of sweetness and farewell.

The stand-out track is the one original, “Lampedusa”, written in commemoration of the 300 African migrants who perished off the Italian island of that name in late 2013. As one would expect, it’s a slow, poignant affair, whose delicate melody is underpinned by the slow tolling of bass lines. A hushed lament to the lost, its four and a half minutes pass by like a whisper. A subtle, unshowy set it may be, but Toumani & Sidiki shows that this particular family affair will endure…perhaps for another 70 generations.
Neil Spencer