Tigrero – A Film That Was Never Made 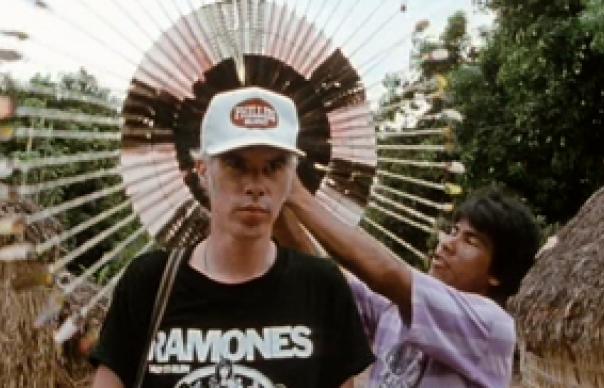 In 1954, 20th Century Fox chief Dary F Zanuck called writer-director Sam Fuller: he’d read about “tigreros,” bare-handed Brazilian forest hunters, and reckoned you could make a movie about such a character. Fuller agreed – but first, he wanted to see the place for himself. So, packing a 16mm camera, two guns, 75 boxes of cigars and two cases of vodka, he hacked his way by horseback into the Amazon jungle, at a time when interior tribes were still notorious for collecting enemies’ heads.

Fuller never lost his head; instead, he lost his heart. He eventually pitched up in the remote village the Karaja, a small, peaceful tribe of river Indians, and fell in love with their isolated way of life. He stayed for weeks, filming their ceremonies, learning their culture, and left promising he’d soon return to make his film – but it never happened. The project was scrapped.

Released in 1994, Mika Kaurismaki’s deceptively slight, utterly beguiling shaggy-dog documentary picks up the story four decades later, as, appetite for adventure undimmed, the 82-year-old Fuller decides the time has come for him to meet the Karaja again, and sets off down the Amazon once more, taking friend and fan Jim Jarmusch along for the ride.

Kaurismaki is alive to the odd couple Fuller and Jarmusch present – Fuller a diminutive, hardboiled yet impish old Quixote, filling the air with talk; Jarmusch a towering, laconic, sceptical young hipster in a Ramones T-shirt – and inserts framing scenes of invented road-movie business between them. Mostly, though, he keeps his film a very straight, simple record of Fuller’s trip. Still, he unpeels layers of meaning.

Fuller discovers the landscapes he remembers have changed almost beyond recognition, and, when he eventually finds them, none among the Karaja seem to recall this cigar-chewing figure from the past. (Curiously, though, this DVD seems to have misplaced the Karaja’s subtitles, present on the original release; an oversight that seriously diminishes the film.) The movie’s heart, however, lies in the scene where Fuller screens the footage he shot there forty years earlier: the entire village huddled around a single television by night, beginning to murmur as they recognise faces unseen for decades, old friends, parents and partners long dead, conjured back to life.

Around this evocation of cinema’s essential power, without pressing hard, Kaurismaki offers an anthropological sketch, forgotten Hollywood history, a ramshackle meditation on time and memory and, as Fuller and Jarmusch banter, a gentle buddy movie. More than anything, though, the film stands as a portrait of Fuller himself. He died three years after this: yet, here he is, full of piss, vinegar, mischief, energy, emotion, adventure and, always, endless stories. A small man, bigger than life.

EXTRAS: None; which, along with those missing subtitles, is a real shame. A well-appointed Region One DVD exists, though…