Twenty-one track monument to the Muses, with bonus disc of b-sides... 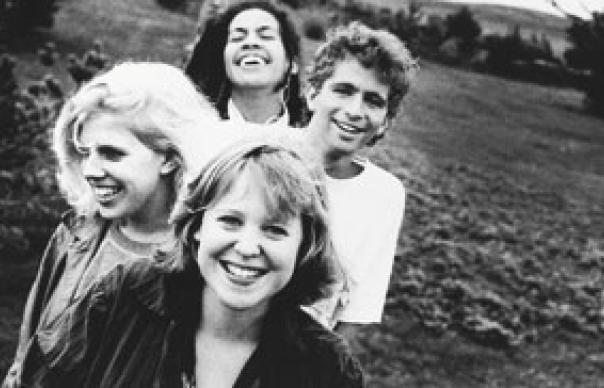 Signed to a languid, art school indie label, Throwing Muses arrived under cover. Like another uncharacteristic 4AD signing of around this time – the Pixies – Throwing Muses therefore got to be a singularly explosive rock’n’roll band without being burdened by the need to act, talk or think like one. It’s not overly fanciful to perceive the Muses and Pixies – they toured together frequently upon their emergence – as the bridge from the punk-infuenced American college rock of the 1980s to the grunge of the early 1990s (significantly, Throwing Muses counted among their fans both Michael Stipe and Kurt Cobain).

Given Throwing Muses’ cheerful disdain for anything resembling careerism, it is actually unsurprising that their biggest commercial hit, “Dizzy”, and several other of their best-known songs, including “Counting Backwards”, “Firepile” and “Shimmer” are omitted, along with the fizzier cuts contributed by Hersh’s half-sister Tanya Donelly during her tenure – while the bonus disc faithfully compiles their 22 b-sides. This, however, is a worthwhile acquisition even for those already in possession of the Muses’ catalogue, especially for the likes of “Cottonmouth”, “Hillbilly” and “Crayon Sun”, although their formidable onstage potence is under-represented, with just two live tracks.

The strength of Throwing Muses was always that, to a greater degree than most artists, they were doing what they were doing because they had to. Hersh has often said that she feels less like an author of her songs than a conduit for fully formed work visited upon her by forces over which she has little control (the refrain of “Summer Street”, keening “One lonesome body/One lonesome song”, perhaps more briskly enapsulates Hersh’s relationship with her art). Certainly, it is difficult to imagine anyone sitting down and deliberately writing the agitated manifesto “Hate My Way”, or the catatonic yodel “A Feeling”, or the frenetic hoedown “Mania”: terrifying and funny, wretched and exuberant, often in the space of a single verse.

In Hersh’s poised and hilarious memoir, Rat Girl, she concludes a bemusedly horrified description of “ambitious” musicians with the important caveat :“But the musicians who make noises for noise’s sake fascinate us. Their vocabulary is slamming joy and desperation, lethargy and force.” It’s difficult to improve on this catalogue of contradiction as a description of Throwing Muses’ palette. They were a band capable of the most exquisite prettiness: the fragile and spectral “Two Step”, which served as the finale of Throwing Muses poppiest album, 1991’s The Real Ramona. They could also summon immense squalls of (entirely rocking) rage: “Furious”, from 1992’s Red Heaven, rendered much of the output of the contemporary grunge boom somewhat milquetoast by comparison.

Though Throwing Muses emerged from an underground milieu disdainful of almost all rock’n’roll orthodoxy, their ability to command the broad range of Hersh’s songs was enabled by an unmistakable degree of old-school – if unusually egoless – musicianship. Carrying Hersh’s voice were her own colossal guitar, and one of the finest rhythm sections ever assembled: a succession of elegant, sinous bassplayers (Leslie Langston, Fred Abong, Bernard Georges) and drummer David Narcizo, a deceptively diffident hybrid of The Attractions’ Pete Thomas and Blondie’s Clem Burke. Holding together something like the helter-skelter of “Bright Yellow Gun” is a good deal more difficult than they make it sound.

Capricious track selection notwithstanding, this is a document that prompts renewed wonder at one of the most astonishing canons of the entire post-punk era. Twenty-five years ago, nobody had ever heard anything like Throwing Muses. Twenty-five years later, that’s still the case.
Andrew Mueller

Q+A KRISTIN HERSH
How did you choose the songs on Anthology?
I sort of left it up to [David] Narcizo. I have a tendency to cringe when I hear anything by us, so I’d have wanted everything taken off.

How do you feel about these old songs now?
The real songs have changed over time, because they’re real – they’re not static. The fake songs don’t do that – and there aren’t any on this album. A real song is so vivid, it’s a different kind of memory, like someone gave you a shot of the past.

Your biggest hit single, “Dizzy”, is notable by its absence.
Well, that’s a horrible song. We did that to give Warners a bad song to work on. They kept saying to us, implicitly at least, you should suck more.

Any concrete news on the new Throwing Muses album?
It’s this long piece where songs come and go and show up in each other. It’s like Broadway or something. Nobody would let us do it if they were in charge, but nobody cares anymore because we’re so old.
INTERVIEW: ANDREW MUELLER