The White Stripes – Get Behind Me Satan 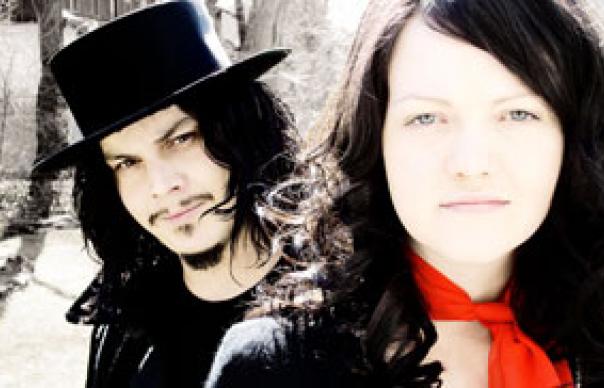 “Today I got some new plans,” wrote Jack White on November 18, 2004, the last entry on his website before work began on the fifth White Stripes album. “I thought about having a failure, but not a fake one a real one. . . Sort of enjoying the success of not succeeding on purpose? That’s funny!”

In March, Jack and Meg White started recording at his home in Detroit. Even by their standards, it was an unfussy process: 13 ideas finessed into songs, caught on tape by their live soundman Matthew Kettle and completed in a fortnight. By most other people’s standards, it appears a slapdash way of working – how better to manufacture a failure than by rushing through a bunch of half-formed song-sketches? And there are other signs that the duo’s latest game is one of self-sabotage. Abandoning electric guitar for much of the album should theoretically scurf off a few fans, and choosing Get Behind Me Satan for a title compounds an impression of Jack White on the run from fame, rejecting the temptations of success just as emphatically as Jesus turned his back on the Devil in the wilderness.

It’s a plausible reading of the plot, but one which conveniently ignores two fairly major issues. One, thus far into his career, Jack White seems congenitally incapable of making a bad record. And two, most of us learned long ago not to take anything this teasing, charming trickster says at face value. Get Behind Me Satan is certainly an odder record than the four White Stripes albums which preceded it. Track One, “Blue Orchid”, which you’ll already know, roughly translates “Back In Black” into a morse code signal for its priapic disco-metal. Track Two, “The Nurse”, a tropical marimba noir, is randomly punctuated by white noise flares. At least one song, “The Denial Twist”, seems to draw on primitive rhythm’n’blues, the golden age of Hollywood and – with its breakbeat, bells and spat-out rhymes – old school hip hop.

Get Behind Me Satan, though, is hardly an alienating, experimental listen. While the instrumentation has generally shifted away from garage rock fuzz, White hasn’t written such an accessible set of songs since 2000’s De Stijl. There’s a sense of The White Stripes reconfiguring their sound, as if realising that the original guitar/drums blueprint could only be extended so far, but the minimalist formula could be stretched much further. By pushing other instruments into the foreground, and creating a mix full of space, surprise and disorienting analogue effects – from that jet-engine whoosh 14 seconds into “Blue Orchid” onwards – White stays true to the band’s aesthetic vision, while mapping multiple paths away from stagnation. All include Meg. Professional divorce, so frequently predicted, seems much less imminent.

The marimba that makes an arresting, shimmering first appearance on “The Nurse” will attract most of the attention, but Get Behind Me Satan is fundamentally a piano record. The stereotypical image of The White Stripes as a blues and garage rock band ignores their love of Tin Pan Alley and showtunes, of ‘30s and ‘40s Hollywood, which has always quietly flourished. Cole Porter’s picture featured in the booklet of 2003’s Elephant, and even 1997’s debut single “Let’s Shake Hands” had as its b-side a camp sashay through Marlene Dietrich’s cabaret hit, “Look Me Over Closely”.

Consequently, the most immediately lovable song on Get Behind Me Satan is “My Doorbell”, springy piano funk with a ‘30s novelty tune lodged in its DNA and White playing the vulnerable lover in a pinched falsetto reminiscent of Little Richard, albeit Little Richard thoroughly desexualised. “When you have a job to write something for a Broadway musical, you don’t have much time, you have to write a hit,” White told Uncut in 2001, and admiration for this kind of rapid craftsmanship is all over the album and its paraphernalia: the ragtime sheet music sat on his piano in the picture; the fact that the title could just as easily echo an old Irving Berlin song, “Get Thee Behind Me Satan”, as the New Testament.

If Elephant gained notoriety thanks to its Luddite flaunting of pre-1963 equipment, much of Get Behind Me Satan’s action seems to take place deeper in the past, or further away from rock’n’roll. Two blousy showstoppers – “Forever For Her (Is Over For Me)” and “I’m Lonely (But I Ain’t That Lonely Yet)” – reference Burt Bacharach and White’s former employer Loretta Lynn respectively. The album’s totemic figure, Rita Hayworth (briefly wife of Orson Welles, himself the inspiration for 2001’s “The Union Forever”), stars in two songs: the mix of solemn piano chords and doggerel that is “White Moon”; and the outstanding “Take, Take, Take”. In the latter, White satirises the relationship between celebrity and public by casting himself as an infatuated fan. He politely bugs Hayworth, asks for her autograph, asks for her picture, portrays himself as someone “not too hard to please” who, hypocritically, wants more and more from his heroine. “She didn’t even care that I was even there – what a horrible feeling,” he concludes, as if in empathy with the fans who want a piece of him.

It would be easy to imagine Hayworth, with her duplicitous Tinseltown ways, as a cipher for White’s ex-girlfriend, Renee Zellweger. Given that the couple split towards the end of 2004, Zellweger – or what Zellweger represents – could tritely be seen as the “Satan” cast off in the title. But it’s just as likely that Hayworth is a cipher for White himself: a superstar whose tolerance of his public is generous, but not boundless; and whose nurtured image is at odds with a well-known secret. Hayworth was an all-American girl with a barely-concealed prehistory as Spanish starlet Marguerita Cansino. White constantly reminds us he is Meg’s little brother, even though the certificate confirming their brief marriage has long been filed on the internet. The new album, he claims, is about “characters and the ideal of truth”, as if to warn us off fishing for too much autobiographical detail in the songs. It’s a familiar strategy: “I like things that are as honest as possible, even if sometimes they can only be an imitation of honesty,” he told NME in 2001. “But a good impression is interesting if you can’t get the real thing.”

In this way, Get Behind Me Satan is the logical development of The White Stripes as a conceptual art project, a theatrical scam which brilliantly synthesises authenticity through the characters of two gauche Detroit siblings. Regular themes in this fiction rise to the surface. Meg’s fleeting showcase, “Passive Manipulation”, plays with family roles and warns, “Women, listen to your mothers, don’t just succumb to the wishes of your brothers.” Jack is constantly at the mercy of the women he adores: chivalrously waiting at home in “My Doorbell”; gently humiliated by Hayworth in “Take, Take, Take”; dancing with thin air on “Little Ghost”, a kind of bluegrass “Hotel Yorba”. On “Instinct Blues” he’s even “The worm that’s under your shoe”, as a grinding 12-bar riff is slowly tugged off its axis by White’s Hendrix-esque explosions.

And yet again, The White Stripes have engineered a blend of music and myth so compelling that the reality behind their oblique, eccentric stories is barely worth seeking out. Occasionally, one seems to stumble on White in an unguarded moment. “Ugly As I Seem” – imagine an agitated Led Zeppelin in Bron-Y-Aur – finds Meg with a set of Steve Took’s bongos and Jack cradling an acoustic, squirming away from analysis. “You want to take away from me things that are mine and it’s not your right,” he complains and, as in “Seven Nation Army”, a conceivably real Jack White emerges: one who constructs a legend for himself, like his idol Bob Dylan, out of paranoia as much as playfulness. But by the next track, “The Denial Twist”, he’s slipped away again, and his proudest claim – “The truth is still hidden” – is reiterated with more force and success than ever. God’s honest truth, after all, could never be as satisfying as this.