The '80s angst classic reissued as a vinyl boxset... 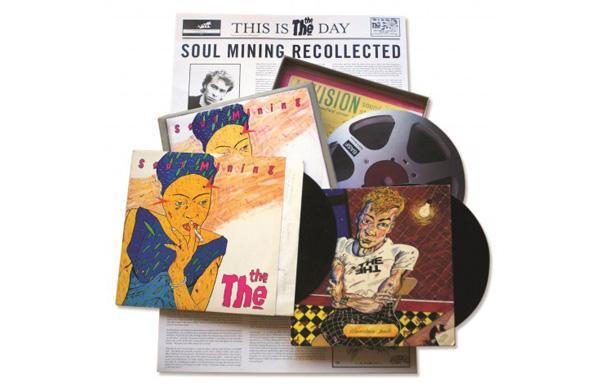 The ’80s angst classic reissued as a vinyl boxset…

Visitors to this year’s Chelsea Flower Show may have encountered an unusual specimen stirring in the Carnivorous Plants section. Sarracenia ‘Matt Johnson’, a new hybrid plant named after the founder of The The, made its public debut last month at RHS Wisley with Johnson present. Johnson’s appearance amid the brightness and colour of Chelsea, posing for photographers with his botanical namesake, might have come as a surprise to those who remember him best as the earnest young mastermind behind his band’s early masterpiece, 1983’s Soul Mining.

In fact, Johnson had already written four albums by the time he came to Soul Mining. While other boys his age skulked in their teenage bedrooms, Johnson refined his songwriting: there were two unreleased albums (See Without Being Seen and Spirits) before he finally released his bona fide debut album, Burning Blue Soul, on 4AD. His intended follow-up was called The Pornography Of Despair, which should give you an idea where his head was at.

Instead he made Soul Mining. Released between post-punk and synth pop, and reflecting both, Soul Mining thrums with ideas, tension, and dread. Johnson’s enduring lyrical concerns – social alienation, political disillusionment and troubles of the heart – are all present and correct, but unlike the industrial/psychedelic adventuring of Burning Blue Soul, they are here given a glossier sheen. Johnson signed to CBS on the strength of early demos he recorded in New York – including a version of future single, “Uncertain Smile” – which suggested major-label confidence in Johnson’s growing abilities as a songwriter.

Certainly, for an album of heavy themes, Soul Mining is musically surprisingly light. Despite its gloomy lyrical disposition (“My aspirations have shrivelled in the sun”, he tells us on the album’s opening track, “I’ve Been Waitin’ For Tomorrow (All My Life)”), the songs themselves are lush and cinematic, dressed in richly textured arrangements. Johnson’s key influences around this time were Cabaret Voltaire, Wire and This Heat; but he had been raised on John Lennon and Tim Buckley. Johnson’s vision for Soul Mining was to recast these classic, enduring antecedents in a new and experimental framework.

The songs themselves oscillate between the political and the personal. Despite its surprisingly jaunty backing, “The Sinking Feeling” bristles with social injustice – “I’m just a symptom of the moral decay/That’s gnawing at the heart of the country”. Elsewhere, against keyboard stabs, “The Twilight Hour” pushes into relationship paranoia: “It’s now way past the hour she usually phones”.

A welcome balance is provided by “This Is The Day” and “Uncertain Smile”, an uplifting number worth the price of admission alone: here a loveless, late-night brooding is disguised by a crisp guitar melody and gilded by Jools Holland’s sparkling piano solo. Although at this point, The The was essentially a one-man show, Johnson roped in several accomplices to help bring his vision to life: Holland, Orange Juice’s Zeke Manyika, synth pioneer Thomas Leer and Foetus’ JG Thirlwell (credited here as Frank Wants). Manyika’s African polyrhythms dominate “Giant”, but arguably the most critical collaborators here are Leer and Thirlwell, whose involvement explicitly connected Johnson’s songwriting craft to more leftfield sonic explorations.

Although Soul Mining only peaked at 27 in the charts, the album nevertheless marked the start of a prolific period for The The. 1986’s follow-up, Infected, found Johnson further exploring a more leftfield musical agenda; it wasn’t until subsequent albums that he began to loosen up a little. He even formed a proper band with Johnny Marr for 1989’s Mind Bomb and Dusk (1992) and found himself, briefly, in the unlikely position of enjoying a Top 20 hit single. But Soul Mining is arguably Johnson’s defining work: ambitious, strange, exciting. And, 30-odd years on, remarkably fresh.
Michael Bonner

EXTRAS: Accompanied by Johnson’s sleeve notes and a remastered pressing of the album, the boxset also includes a second 12” of alternative versions and remixes. Of most interest are the original ‘New York’ mixes from the Mike Thorne sessions: “Uncertain Smile” is chunkier than the album version and features a sax solo rather than Holland’s piano, not forgetting “Perfect”, featuring David Johansen on harmonica. It’s rounded off by 12” remixes of “This Is The Day”, “Perfect” and “I’ve Been Waitin’ For Tomorrow (All Of My Life)”.

“Somewhere between pure euphoria and terrible insecurity”: An interview with The The’s Matt Johnson