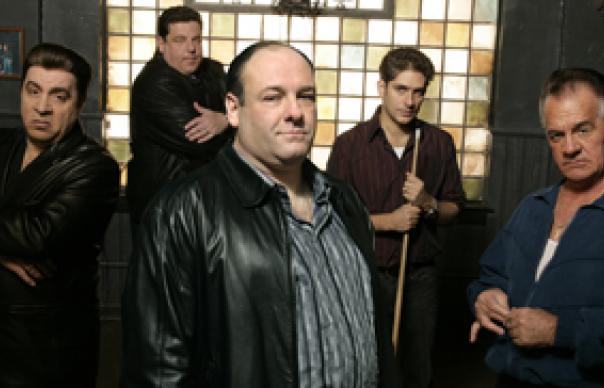 With The Sopranos, what you see is not what you get. In fact, it’s hard to imagine another drama so dedicated to the art of lying. Throughout its six seasons, there’s scarcely a scene in which the characters’ words could be taken at face value. David Chase’s series is about the Mob, yes, but mostly it’s about untruths and their consequences. That, and selfishness. And greed. And self-deception. And denial. And death. The values of the average American family. Small wonder Tony needed therapy.

At the outset, when Chase decided to retool Scorsese’s GoodFellas as a morality play about the family affairs of the Mob, Tony was a Mafioso of the middle-rank, his ambitions held in check by Uncle Junior, while his abusive mother yanked the chains of his mental stability.

This season begins with everything under control. Tony is boss. His mother is long dead, and Uncle Junior is paddling on the pebbled shores of dementia. Tony’s marriage to Carmela has been repaired – she will swallow her conscience in return for a new house – and the family prevails. It’s still midlife, but the crisis has been quelled. Then, blam! Tony ends up in a coma, prompting power plays among his soldiers.

The struggle is unseemly, but it does offer extended airtime to some of the supporting characters. The elegantly-coiffured Sil – played like a Tex Avery cartoon by Steven Van Zandt – steps up, but quickly discovers that ambition is a curse. Vito (Joe Gannascoli) – his confidence stoked by the success of a recent diet – looks well-placed for promotion, but is hampered by some unwise sexual adventures. Being a “fenucca” is not a smart move for a made man, and neither is it a good idea to squabble with the irascible Paulie Walnuts. Paulie’s sense of injustice is almost thermonuclear, but Tony Sirico plays him with such tender self-mockery that he comes across as a lonely soul, rather than the beast his actions might suggest.

The therapist, Dr Melfi, used to operate as a kind of secular priest, offering Tony a kind of confession without guilt, but she is less central here. The role of Carmela, is more significant. Apart from the occasional intervention by her daughter, Meadow, Tony’s wife is the only character capable of imagining a different way of life. On vacation in Paris, she visits the remains of some old Roman baths, and turns tearful: “We worry so much, sometimes it seems like that’s all we do. But in the end it just gets washed away.” But even the saintly Carmela has her price.
And then there’s Tony: a vicious, violent thug who thinks of nothing but his own gratification. So what’s not to like? James Gandolfini has the brutal charisma of Jack Nicholson, but he’s also capable of looking boyish and pathetic, or merely dissolute, as he shuffles to the fridge in his white towelling robe. He is physically diminished, but that only makes him less predictable, more dangerous.

Chase has faced some criticism that Series 6 is slow, and that nothing significant happens. The first charge has some validity, but the measured pace is a mark of quality. The opening three episodes do offer a challenge to the viewer, but they’re works of bold invention, with half of the action unfurling from inside the imagination of the comatose Tony. Not since Dennis Potter’s The Singing Detective has there been a drama in which the storyline was hitched so obviously to the delusions of the central character.
It’s confusing, but it works, and the effect isn’t based on suspense. Watch it twice and you can appreciate the quality of the writing, the richness of the language, and the way every action is prefigured by another event. The script is springloaded with consequences, and the prevailing mood is one of doom.

As a piece, Season 6 is incomplete. These four discs house the first 12 episodes. The final eight are due in Spring 2007, and a judgment on the conclusion of the series will have to wait. As it stands, everything is finely poised.

The end, surely, is nigh. The signs are all around that the old ways don’t count for anything in corporate America. Even the priorities of the Feds have changed. They’re now more interested with the War on Terror than organised crime.

It’s all good, and it’s all bad. Best moment? The scene where Christopher and his scuzzy pal Corky inject heroin, while Fred Neil’s mournful “Dolphins” plays on the soundtrack. Cut to Tony, in therapy, lying, as always, to sexy Dr Melfi. “Every day is a gift,” he tells her. “It just … doesn’t have to be a pair of socks.”