The Pogues – Just Look Them Straight In The Eye 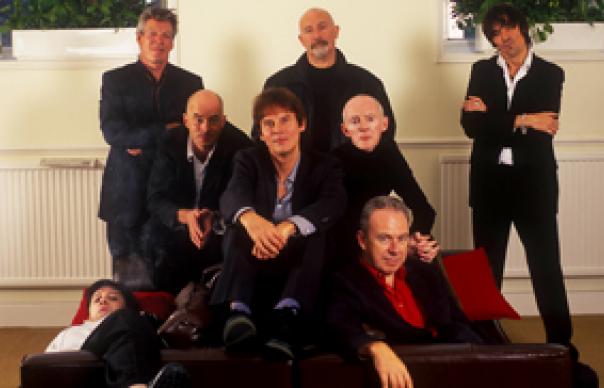 At the very least, The Pogues are to be commended for unusual generosity and candour: more than a few of the 111 assorted out-takes, live recordings, collaborations, radio sessions, demos, works-in-progress, floor-sweepings and barrel-scrapings contained on these five discs are less than altogether flattering of their creators. Or, as guitarist Philip Chevron rhetorically admits at the outset of his (very funny) sleevenotes, “So what’s all this then? A bunch of dodgy Pogues tracks that did not merit release at the time they were made? Well, that is inevitably true of some of them. . .”

However, it’s just as inevitably true that much of the stuff collected here is utterly magnificent – so much so, indeed, that the moments which might really have been better left in the cupboard radiate, in context, an endearingly fallible humanity. And even the most unrealised, hastily recorded stuff pokes wide holes in the unhelpful (if somewhat self-created) myth of The Pogues as a bunch of incapably sloshed, ragamuffin chancers. The attitude they brought to their take on Irish folk was certainly pure punk, but that didn’t alter the fact that Irish folk is a genre unforgiving of ham-fisted players – and there’s much here to make the case that The Pogues were nobody’s inferiors (two 1991 live recordings of The Pogues sharing a stage with The Chieftains are especial highlights). The three included demos of “Fairytale Of New York”, with then-producer Elvis Costello providing piano on one and bass on another, reveal how a good idea was honed to imperishable greatness, and bespeak a positively sober attention to detail.

The only major disappointment of the enterprise is the iffy sound of some of the live tracks, which may not have been recorded with a view to posterity. The excerpts from a rousing 1987 show at Glasgow’s Barrowlands capture something of the glorious swagger of The Pogues at their best – at least when the band can be heard over a typically delirious audience – but the early 90s incarnation of the group featuring the late Joe Strummer on lead vocals deserves a better memorial than the rather muddy cuts dredged up here. Mostly, though, a fabulous trove of feral joys.

What was the thinking behind including those sketches towards “Fairytale Of New York”?

“There is always a danger that shedding daylight on something will take away the magic, but I think ‘Fairytale” has been around long enough to take care of itself – there are films and books about it. Plus, some of its history has been rewritten or overlooked – Elvis Costello’s contribution especially I thought was worth drawing attention to.”

Was it strange when the “faggot” bit suddenly became controversial last Christmas?

“That was so funny. After playing the hell out of it for 20 years, they got qualms. The guy was told not to be such a silly bollix and to get on with his job.”

It’s a bit of a subtext to the box set, though – there’s a few radio sessions where you’ve had to tidy the language.

“It started out even with band’s name. The first single was released as Pogue Mahone, and producer at BBC Scotland who was hip to the gaelic said they couldn’t play it, and Dave Robinson at Stiff said we’d have to change it. And everyone called us The Pogues anyway. I could understand why they would play ‘Boys From County Hell’, but at that point you have to get creative with the situation you’re in, and Shane’s substitutions have always been brilliant.”

How important was it to get the collaborations with Steve Earle and Kirsty MacColl on there?

“We enjoyed them when we did them, so it seemed simple enough to license them. Despite the appearance of being falling down Irish guys, we were good enough to be Kirsty or Steve’s backing band, and that’s worth celebrating. We also wanted to acknowledge that some were more successful than others. We regret that the one with Joe didn’t bear more fruit than it did.”

And how are you?

“Pretty good, thanks for asking. I came through very scary time last year, but I did all the right things, had huge amounts of support from friends and loved ones, and at the moment I’m cancer free, and touching wood.”