The Other Side Of Hope 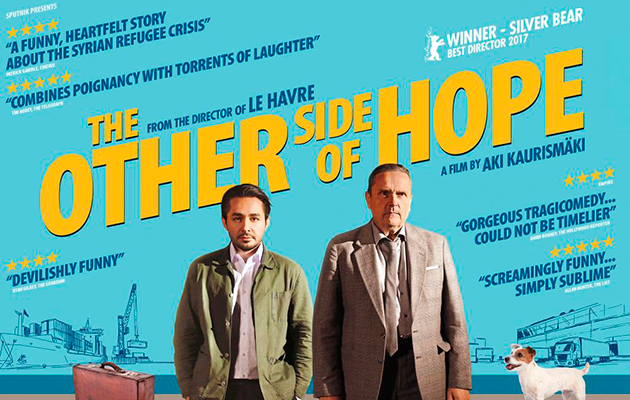 For his latest film, the melancholy Finnish director Aki Kaurismäki appears to have broken with tradition. Previously, his films like The Leningrad Cowboys series, have largely taken place in a version of Finland that seems largely untroubled by contemporary events. This new film, however, finds an urgent topically breaking through.

The Other Side Of Hope interweaves the stories of two men who have fled their homes. First, we meet Khaled Ali (Sherwan Haji), a refugee from Syria who has stowed away aboard a coal ship and arrived in Helsinki seeking asylum. Then there is Wikström (Sakari Kuosmanen), who has taken a less perilous, though no less dramatic, route to freedom. He has abandoned his boozy wife, won at poker and bought a dilapidated restaurant named The Golden Pint with the winnings.

In some ways, The Other Side Of Hope is a companion piece to La Havre, Kaurismäki’s 2012 film that also brought together an ageing local with a much younger refugee. Kaurismäki has often displayed compassion for the dispossessed – in The Man Without A Past, his nameless protagonist joined a community of homeless folk living inside empty container units. But here, he brings a torn-from-the-headlines immediacy to Khaled’s tale. A speech to the Finnish Immigration Service reveals the horrors he endured in Aleppo and during his hazardous journey to freedom.

The film’s tone shifts imperceptibly when Khaled and Wikström meet. Much droll humour – a Kaurismäki trademark – unfolds. Wikström offers Khaled a job at The Golden Pint, which is transformed into a sushi bar, much to the chagrin of the venue’s indolent resident staff. As the doorman, Ilkka Koivula is especially good, in that deadpan, Kaurismäki way.