The National – Trouble Will Find Me 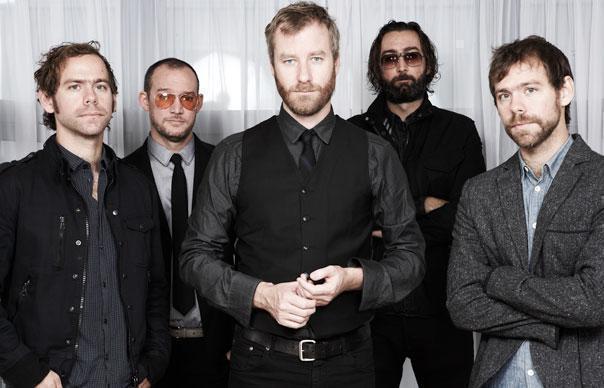 The National’s path to fame has been taken by increment. When they debuted back in 2001 with their self-titled record on Brassland, a label founded for such purpose by the band’s twin sibling guitarists Aaron and Bryce Dessner, their vaguely alt.country-ish songs felt of small and intimate dimensions, expressions of sore-headed introspection just large enough to fill a glass a few times before the barman called time. Just over a decade later, as Barack Obama hit the campaign trail for re-election, The National played from 2010’s High Violet before a 10,000-strong rally in Iowa at the request of the President’s campaign team.

What this really reveals is that The National write songs which are scalable: built around small, personal sentiments that, when blown up large, strike a chord. In the run up to Trouble Will Find Me, Matt Berninger, the group’s vocalist spoke of their career as a process of “trying to disprove our own insecurities.” Leaving aside that any anxiety you harbour when the commander-in-chief has your back probably isn’t going anyplace soon, the fact remains that a well-adjusted National is hardly a desirable prospect, so it’s perhaps for the best we find our way into the Brooklyn quintet’s sixth album on a note of characteristic self-examination. “Don’t make me read your mind, you should know me better than that,” sings Berninger, gently, as “I Should Live In Salt” unfolds in a wooze of Korg keyboards, before its steadily build to a bruised climax: “I should live in salt for leaving you behind”.

Berninger’s lyrics are key to The National. Introspective and impressionistic, laced with angst and self-doubt, they’re like little fictive miniatures, or a conversation conducted in the intimate language of a lover’s code (it’s probably no coincidence that since 2007’s Boxer he’s worked on lyrics with his wife Carin Besser, formerly fiction editor at the New Yorker). Little epigrammatic phrases pop out of his songs, veiled in meaning, but with a crisp elegance that lodges them in the memory. “I’m under the gun again/I knew I was a 45-percenter then,” he sings on “I Need My Girl”. “I have only two emotions, careful fear and dead devotion,” quips “Don’t Swallow The Cap”. Tender piano and sparse, echoed drums usher in “Slipped”, a fuck-up’s confession that self-lacerates to the bone: “I’m having trouble inside of my skin/I’ll try to keep my skeletons in.”

As crucial, though, are the contributions of the Dessner brothers. No indie-rock makeweights, both are classically trained, having engaged in extra-curricular projects from New Music performances with the Copenhagen Philharmonic to The Long Count, an orchestral show with artist Matthew Ritchie based on the Mayan creation story Popol Vuh. Their growing expertise as arrangers was evident on High Violet, and is even plainer here. Bryan Devendorf’s steady, circular percussion anchors, keeping songs like “Fireproof” and “Heavenfaced” in a state of broad structural simplicity. Given close attention, though, they bloom with cello, piano, and clarinet, instruments scored in with a composer’s eye for detail and careful restraint.

The result is, as ever, both uplifting and melancholic. “Demons” and “This Is The Last Time” are anthems, as surely as the songs of The Arcade Fire or U2 – they share that emotional weight, that goose-pimply build. But these songs instinctually shy away from grandstanding or big gestures; every time you think they’re headed for a fist-pumping chorus, they’ll veer off, or Berninger will shrug off the gravity with a lyrical clown move delivered in deadpan: “There’s a science to walking through windows,” he repeats on “Graceless”.

Here and there, you wonder if Berninger is quite the vocalist he aspires to be. For a band admirably prepared to get up there on the political stump, Trouble Will Find Me can feel a little First World Problems. The lyric of “Pink Rabbits” (“I was a white girl in a crowd of white girls in a park… I was a television version of a person with a broken heart”) has a satiric quality, but by and large The National dwell on an insoluble sadness that can’t help but feel a little self-regarding. Still, here we risk critiquing a band for not doing what they have not set out to do. Obama might be back in the White House, but there are no fairy tale endings here. We still live in uncertain times, and an uncertain soundtrack can still be a source of comfort.
Louis Pattison