The National – Mistaken For Strangers 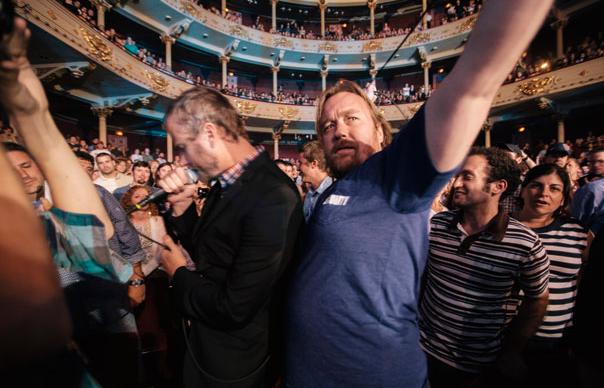 The new film about The National doesn’t quite know what it is. Neither quite a documentary or rock biopic, it’s a strangely subjective picture that works itself out as it goes along. Fittingly, it starts on an uncertain note. “Do you have any kind of organisation or plan for this film?” singer Matt Berninger asks his younger brother, Tom. Set up in Brooklyn’s Prospect Park, Matt has erected a deckchair and parasol in less time than it takes Tom to think of the first question in his shambolic interview.

Cut to a montage of clippings – 10-page New York Times stories, Billboard chart positions – and newsreel footage that outline just how accomplished The National are these days. Meanwhile, Tom – nine years younger than Matt, a head shorter, a bit heavier – lives with their parents in Cincinnati, Ohio, and sits in the basement listening to metal and making b-movie-style horror films. His directorial intentions can loosely be interpreted as wanting to outdo Peter Jackson’s Braindead for use of fake blood.

Feeling guilty about having left for college when Tom was a kid, and aware of his static home life, Matt offers his brother a job as a roadie on the tour for 2010’s High Violet. As the only member of The National without a brother in the band, it’s a bonding exercise, though not a particularly successful one. Living with his parents has left Tom with a lax attitude towards responsibility: he misses bus call, forgets to sort out Werner Herzog’s backstage pass, and leaves a milky cereal mess on the floor of his brother’s hotel bathroom. In response, Matt runs the emotional gamut from empathetically frustrated to quite terrifyingly livid.

Not that Tom’s particularly bothered at first; to him the job is a meal ticket to make an all-access movie about his brother’s band. His predilection for bludgeoning metal and horror underpins his technique as a documentarian, sneaking money shots (the band asleep in their tour bus beds, drummer Bryan Devendorf naked in the shower) and asking blunt, odd questions that outline the lack of understanding between them. “Where do you see The National in, like, 50 years?” Tom asks Scott, stunned to learn that they don’t plan on being octogenarian rock stars. “So, how famous do you think you are?” he asks his squirming brother.

Part of the film concerns the unfair immunity of fame and the resentment it brews among those who don’t benefit from it, even when they love those who do. The band enjoy many layers of protection, while Tom cries into his camera after eventually getting fired and realising that his life is in “freefall”. From its second act, the film turns into a portrait of his and Matt’s relationship, addressing what hope any of us have against our worst self-defeating impulses. (To see The National try and fight theirs, investigate their first documentary, Vincent Moon’s A Skin, A Night (2008), an incredibly miserable and hard-to-love film about the very fractious sessions behind 2007’s Boxer.)

It’s heartbreaking to see Tom’s happy-go-lucky, endearingly arrogant persona crumble into self-doubt as he realises how pitiful he’s become, almost as if he were a character in one of his brother’s songs. (There’s some footage of The National recording sixth album Trouble Will Find Me, notably “I Should Live In Salt”, which concerns the brothers’ relationship.) He returns home to Cincinnati to interview their parents about the fundamental differences between the siblings. “Having Matt as my older brother kind of sucks, because he’s a rock star and I am not,” says Tom. “And it’s always been that way.” We see photos of a gangly teenage Matt playing quarterback, but also learn about the brothers’ shared depressive tendencies from inside their artist mum’s studio, where she has a wall covered in very un-brothers-Berninger inspirational quotes.

As Tom comes up with a plan for the film, it becomes a kind of metatextual documentary about making a documentary. It’s an odd concept, but it works thanks to the enjoyably strange array of threads being tugged at here. What starts as a one-man Decline Of Western Civilisation Part II comes to evoke a significantly more redemptive American Movie. Tom embraces sentimentality, but his natural comic timing and propensity to fail keeps schmaltz at bay. The National’s public persona is misleadingly serious, but they’re willing to appear in unflattering lights here, and relegate themselves to supporting players in the story of a guy who it’s easy to love even if you’re not a fan of the band. As different as Matt and Tom Berninger are, they both saved themselves in the same way: turning embarrassment and pain into enduring art rich with humanity and empathy.
EXTRAS: Performance footage, interviews and offcuts. 8/10
Laura Snapes