The Little Willies – For The Good Times

Second collection of old-school country and western covers from Norah Jones and co. ..By sheer dint of the fact she plays the piano and occasionally dips into the Great American Songbook, Norah Jones finds herself marketed as a lounge jazz singer, a category error compounded by the fact that her sales have all but bankrolled the Blue Note label for more than a decade. Of course, she’ll be the first to admit that she’s not a jazz musician. 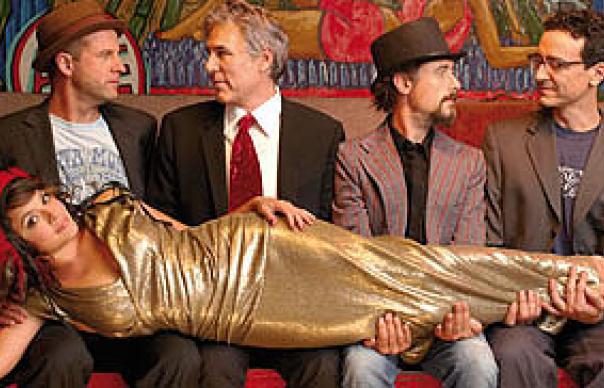 Second collection of old-school country and western covers from Norah Jones and co. ..By sheer dint of the fact she plays the piano and occasionally dips into the Great American Songbook, Norah Jones finds herself marketed as a lounge jazz singer, a category error compounded by the fact that her sales have all but bankrolled the Blue Note label for more than a decade. Of course, she’ll be the first to admit that she’s not a jazz musician. Listening to her albums, Jones makes more sense viewed as a bucolic country singer who wears her jazz chops lightly; pitched (on some nebulous jazz/country continuum) somewhere jazzwards of Willie Nelson, but a little twangier than Ray Charles.

She rarely sounds as comfortable as she does in The Little Willies, the classic C&W covers band she started in 2003 with four New York pals. One of them is Lee Alexander, her erstwhile partner and bassist; when the couple split in 2007 it was assumed that The Little Willies would not reconvene, especially when Alexander left Manhattan to build and race sportscars in Nevada. But their split was clearly amicable enough to reunite for a second album.

The band’s 2006 debut was recorded in just two days with no overdubs, initially to test out the acoustics of a studio that Jones had built with Alexander. Album number two – laid down live in only three days – follows a similar template, comprising covers of classic country songs by the likes of Johnny Cash, Kris Kristofferson and Willie Nelson (the last, of course, inspiring the band’s name).

The band’s elder statesman is lead guitarist Jim Campilongo (the Bert Weedon of Brooklyn hipsters), and the lead vocalist on half of the songs is Richard Julian (a singer-songwriter who has recorded a few albums of his own songs, featuring members of Bright Eyes and Wilco), but the band’s USP remains Jones’s beautifully groggy voice. On tracks like Hank Williams’ “Lovesick Blues” or Willie Nelson’s heartbreaking “Permanently Lonely”, it’s those woozy, sighing backing vocals that leap out from the speakers. It’s enough to turn even the jauntiest novelty songs – like “Fowl Owl On The Prowl” (a pastiche song knocked out in a hurry by Quincy Jones from the soundtrack to In The Heat Of The Night) or Burl Ives’ “Diesel Smoke, Dangerous Curves” (the “Louie Louie” of trucking songs) – into lovely, lazy slumber ballads, their spikiest elements liquefied by Jones’s contributions.

Jones, of course, is not your usual feisty, spit-and-sawdust country diva, and some tales play very differently when she sings lead. When Loretta Lynn sings “Fist City” you can visualise the narrowed eyes, the spinning handbag and the Popeye fists; when Dolly Parton pleads “Jolene”, you can hear the quiet desperation and the implied threat. But, in Jones’s hands, these rugged, rough-hewn songs are sanded down, polished to take on a different, rustic charm.

Only it’s not too polished. For five exceptionally good musicians (all except Richard Julian trained at one of America’s finest jazz and improvisation conservatoires), it’s surprising how sparingly they play. Nashville music – both in its classic honkytonk and its ickier recent guises – has a tendency to pile on the strings, the harmonies, the fiddles and the pedal steel, but The Little Willies keep things gorgeously spartan, with barely an unnecessary note played anywhere. As a result there is no unearned sentiment, and Jones and co manage to eke emotions from Kris Kristofferson’s tear-jerking “For The Good Time” that neither KK nor Elvis Presley managed, and locate a core to Hank Williams’ “Remember Me” that eluded Rickie Lee Jones. It’s that discipline that stops this from being a self-indulgent, back-slapping bar-room session and turns it into something sublime.
John Lewis

Q&A Richard Julian
You record very fast, which seems astonishing in an age when bands spend months in the studio…
The thing is we’re not having to write material or work out our “sound”. We’re playing old material and we’ve already got our sound figured out from live shows! This time it took a little longer. A track like “Jolene” had no real arrangement, it’s just us trying to zoom into each other and get a vibe. That proved to be a little harder to capture, so we had to try it a few times before we found a take that worked. But we still finished the whole thing in three days.

How do you and Norah divvy up the lead vocals?
It’s just whatever sounds good. Some songs suit her better, some suit me. On “Foul Owl” she starts off on the bottom and ends up on top. Not everyone who becomes successful at music at her level is a great musician. They might be an interesting artist, or have an interesting image. But Norah – you can stick her in any musical context and she can handle it, cos she’s got great ears. Here she shows that she can be a rhythm section player.

The standard criticism is that these are pointless cover versions by bourgeois New Yorkers – what’s your response?
There’s always the question of “are you authentic enough”? We’re not “authentic” in the sense that we don’t have a fiddle or a pedal steel and we don’t sing in a certain accent. But we’re authentic to ourselves, in that we’re not affected. And hopefully we’re introducing people to songs by obscure guys like Ralph Stanley or Red Simpson. Thing is, there’s plenty to chew on with our versions because we’ve got some terrific musicians. “Diesel Smoke, Dangerous Curves” is a bit of a novelty song, but I think we make it sound kinda… sexy. Ha ha!