The Last Shadow Puppets – The Age Of The Understatement 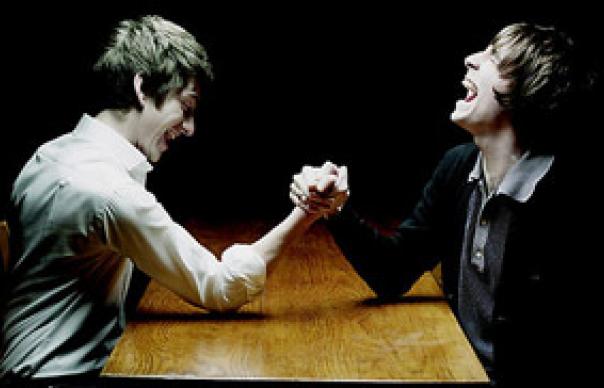 Now it all makes sense. Anyone who wondered where Alex Turner had mislaid his melodic gifts on hearing Favourite Worst Nightmare now has their answer. Subconsciously or not, he was squirrelling them away for his first side-project.

Smart move: this way The Monkeys keep their credibility and get to look new drinking buddies QOTSA in the eye, while Turner gets to show off his more expansive side free from any nagging commercial pressures.
The sense of a vast weight being lifted from young shoulders is almost tangible. With Rascals songsmith Miles Kane (also twenty-two) acting as a worthy musical foil – the pair’s voices are so intertwined to be almost indistinguishable – Turner revels in the opportunity to explore musical avenues bricked-up during his day job. So we get tumbling baroque pop (“The Chamber”), dreamy Mariachi shuffles (“Standing Next To Me”), and an overwhelming sense that all those hours listening to Scott 4, Forever Changes and Burt Bacharach’s Reach Out haven’t gone to waste.

Ambitious, if not downright pretentious stuff, you might think. But with Arcade Fire arranger Owen Pallett draping the songs in sympathetic strings and producer James Ford working overtime on drums, the result is a widescreen epic, full of high fevers and crystal-clear vocal performances.
“Before this attraction ferments/Kiss me properly and pull me apart,” croons Turner on the title track, while “The Time Has Come Again” sees him access a tenderness not seen since “Despair In The Departure Lounge”.

What The Monkeys cagoule-reliant fanbase will make of a record which sounds more akin to Barry Ryan or The Love Affair than any of their peers is another thing. But free from the responsibility of seeing the world via a fug of Smirnoff Ice, Turner’s lyrics are back to his loquacious best.
“It’s the fame which put words in her mouth,” he sighs on “My Mistakes Are Made For You”, with the same sense of yearning which runs through the whole album. All round, it’s simply a plea for a little decorum in an age where hyperbole runs riot.