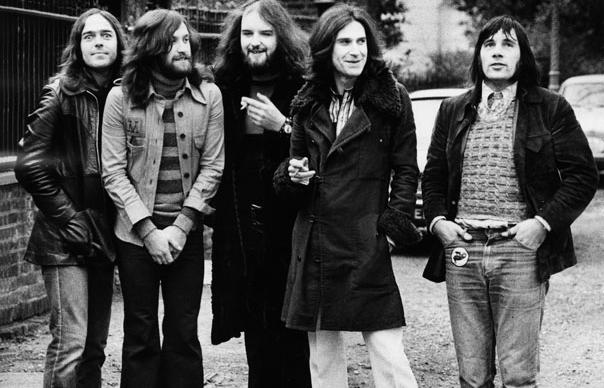 A Kinks fan making a pilgrimage to modern-day Muswell Hill would probably experience a slight disconnect. These red-brick Edwardian avenues produced the writer of “Dead End Street”? Really? But then stand outside Ray Davies’s childhood home for a moment, and try to calculate its interior dimensions. Looking ideally-sized for a young couple with a baby, 6 Denmark Terrace had to house Fred and Annie Davies and various permutations of their eight children. And reading between the lines of Muswell Hillbillies, they didn’t even want to live there in the first place.

Despite its affectionate title, Muswell Hillbillies is anything but a tender tribute to the north London suburb that Ray and Dave Davies knew as home. A previous Kinks album had used the village green as a symbol of a nostalgic Eden (and another had portrayed Australia as a pot of gold for emigrating Brits), but a move to Muswell Hill – the conceptual glue holding the 12 songs on this 1971 LP together – seems in Ray’s eyes to represent a defeat for the working class, a victory for bureaucracy and the fracturing of a way of life. The character in “20th Century Man”, the opening song, is a disillusioned anti-hero, alienated by every current trend and unhappy about the erosion of his civil liberties. The narrator of “Complicated Life” is plagued by a catalogue of chronic ailments. The old man being remembered in “Uncle Son” never had a voice, never had a politician willing to speak for him. These people were mis-sold a utopia and cheated out of a vote.

But if the concept sounds depressing, the beauty of Muswell Hillbillies is its defiantly Kinksian ability to smile its way out of despair. Full of gags and musical winks, the songs extract a wonky comedy from dire situations – and some of them really swing. Davies adopts different voices, including a tragicomic Bolanesque bleat, to articulate each character’s plight (alcoholism; a prison sentence; a once-fat woman fallen victim to anorexia), while The Kinks, with Dave Davies on dobro and slide guitar, allow influences from pre-war American popular music to infiltrate their famously English sound. “Have A Cuppa Tea” is a cockney knees-up, but there’s a touch of Scott Joplin in the piano and one member of the household is called “grandpappy”. “Alcohol”, a mournful march, has its roots in New Orleans. “Holloway Jail” is like one of those Depression-era bad luck stories on Ry Cooder’s first album. “Muswell Hillbilly” ambitiously attempts to justify its pun by tracing links between working-class Londoners and mountain communities in Mississippi and West Virginia.

Mostly, Muswell Hillbillies operates in a state of exaggerated calamity where pain meets the funny bone. The exception is “Oklahoma U.S.A.”, a gorgeous ballad about a girl who adores Hollywood musicals. Light as air, it appears to float several feet off the ground, so dreamily does Davies sing it. The compassionate way in which he shows us the contrast between the girl’s monochrome life and her Technicolor daydreams is so delicate it’s almost balletic.

This deluxe edition of Muswell Hillbillies adds a 13-track second disc of remixes, radio sessions and outtakes. “Lavender Lane” (no relation to the 1967 song “Lavender Hill”) is an oddity, revisiting the “Terry meets Julie” vocal melody of “Waterloo Sunset” but jazzing it up in a New Orleans arrangement. “Mountain Woman” and the Randy Newman-like “Kentucky Moon” are examples of Davies’s early ’70s fascination with rural American societies (“uneducated but they’re happy”), whom he romanticised like lost tribes. The charming demo “Nobody’s Fool”, meeting us in a familiar Soho, sounds like a Percy outtake but was in fact a theme tune for the ITV series Budgie. “Queenie”, a 12-bar instrumental, is the least consequential of the bonus tracks. There are also two remixes from 1976 (“20th Century Man” and “Muswell Hillbilly”), both marred by Ray’s gratingly loud vocals. Meanwhile, of the three alternate takes, “Have A Cuppa Tea” is the standout – Dave must have been irritated that his enthusiastic C&W guitar-picking was consigned to the vaults – but the instrumental version of “20th Century Man” is also illuminating, as it reveals how a deceptively casual performance, sounding like a spontaneous five-man busking session, was really a matter of careful construction.
David Cavanagh

Q&A
RAY DAVIES
Did Muswell Hillbillies start from a central idea?
Yeah. After years of being a singles band, I wanted to do something that defined The Kinks. I wanted to celebrate our origins. My parents came from Islington and Holloway in the inner city. They moved to Muswell Hill when there was a lot of urban renewal and their area got knocked down. I wanted to write an album about their culture and the transition they made when they were shipped north a few miles to Muswell Hill.

Talk us through some of the songs.
With “20th Century Man”, I had this image – I wrote a short story about it – of a man in the last house in the street to be demolished. He tapes explosives to his body, so that if they come to knock the house down, he’ll blow the place up, including himself. It’s mad, semi-psychotic imagery, but that kind of thing still goes on today, with the projected train link and the Heathrow extension. They literally blow up people’s houses. “Here Come The People In Grey” is about that, too. It’s all about social upheaval. “Acute Schizophrenia Paranoia Blues” is about someone who feels like they’re not in control of their own life anymore.

“Uncle Son” seems to be about people slipping through the cracks in society.
My favourite line in that song is “They’ll feed you when you’re born and use you all your life.” They’ll give you a kick start, but you’ll always belong to them. That song is anti-politics. Not that I believe in anarchy, but I do believe in freedom. Even then, I had a nightmare vision of what society might become. The whole album has a lot of ominous undercurrents to it.

And yet the music really rocks and swings.
It’s happy and jaunty, yeah. We had a Dixieland horn section on tour with us. Not many rock bands were doing that in 1971. But it added to the colour of the music we were writing. It felt great to have a phrase played on guitar and repeated by the horns. It was evoking the trad jazz era. It was looking back to previous generations, which is what the songs were doing.

And on “Oklahoma U.S.A.”, you finally wrote about America.
My eldest sister, Rosie, brought me up. It’s a song about her going to work in a factory, and her way of escaping was the movies. No Nintendo. No PlayStation. No apps in those days. Rosie’s escape was the movies. I used her as a springboard and then I drifted off into my own world. As she walks to the corner shop, she’s “walking on the surrey with the fringe on top”. “The Surrey With The Fringe On Top” is a song from Oklahoma!. It’s the song that my other sister, Rene, was dancing to [at the Lyceum in 1957] when she died. A lot of inner messages are linked into the words. Only people who know me would fully understand them.
INTERVIEW: DAVID CAVANAGH