The Killers – Day And Age 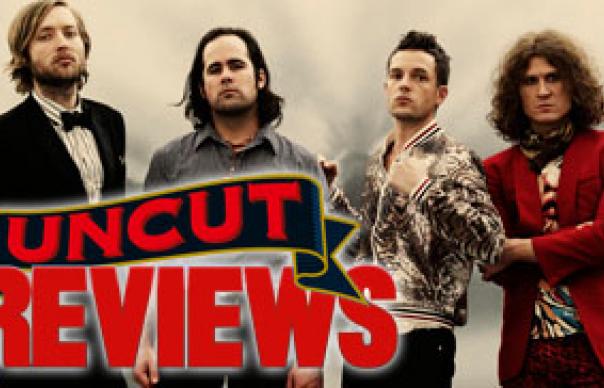 It tells you a lot about The Killers’ Anglophilia, that, having made the best Britpop record of the 21st century with Hot Fuss, they then tried to follow it up with an album of widescreen heartland American rock, and went it about in exactly the fashion of a British MTV band circa 1985: ditching the synths and eyeliner, cultivating comical facial hair and flying in Anton Corbijn to shoot them as existential desparados in cowboy hats.

The magnificent “When You Were Young” aside, Sam’s Town was a disappointment. Crucially it failed to convince the American audience they were so keen to court. So news that they had chosen to make their third album with Stuart Price – the go-to-guy for your 80s pop makeover – seemed like an admission of defeat, a retreat back to their comfort Eurozone.

On first listen, comeback single “Human” seems like everything you would expect: melancholy stadium disco. The more you listen, the more you realise that the particular song it reminds you of is Pet Shop Boys’ take on “Where The Streets Have No Name” – that sarky, sublime act of pop criticism that dragged U2‘s apocalyptic anthem up against Frankie Valli’s high-kicking “Can’t Take My Eyes Off You”. It was the song, in other words, that took U2 to Vegas. And yet “Human” may be the better song, because when Flowers sings “Are we human, or are we dancers?”, it’s without hubris or easy irony. As a devout child of Vegas, you sense he really can’t decide whether he’d rather be Bono or Neil Tennant.

“Human” sets the stage for Day And Age, then, as a kind of three ring circus or lavish concept opera about looking for Heaven in Las Vegas. If Sam’s Town wanted to be an album about the working-class world of bellhops and bartenders behind the casino dream, here we get both sides of the tracks, from the “Dustland Fairytale” to the “Neon Tiger”. No stops have been left unpulled. At time it’s like some extravagant Baz Luhrman/Jim Steinman musical about Howard Hughes and Liberace. It’s as spectacular, desparately eager-to-please, grandiose, absurdly entertaining, corny and heartbreaking as a typical night out on the Strip.

Opening song “Losing Touch” is as brassy and snazzy as Bowie circa Let’s Dance and almost feels like an apology for their second album, with Flowers singing that though “you sold your soul like a Roman vagabond” and lost your way, “now you’ve found your way back home”. And the spirit of Bowie is there too on “Spaceman” when Flowers croons “I was hoping to leave this star-crossed world behind / but when they cut you open I changed my mind”. There is something sensationally shameless about these songs, a desire to throw everything against the wall of sound and see what sticks. Don’t care for the slap bass and sax, the “rattlesnakes and romance” of “Joyride”? Try the steel drums and Bacharach bossa nova of “I Can’t Stay”. Feel that the Meatloaf-meets-Moroder of “Dustland Fairytale”, with its Cinderellas in party dresses and devils waiting for the showdown, is a little OTT? Just stick around for “This Is Your Life” which bravely revives the Fairlight folkways and martial beat of Talking Heads circa Little Creatures.

Some will doubtless feel that Stuart Price has led the band astray into a mad safari through 80s cheese here, and to be perfectly frank, it’d take a stony heart to keep a straight face throughout the entire record. And yet a song like “Neon Tiger”, in love with the “wilder side of gold and glitz”, is quite refreshingly brazen, daring to risk absurdity for the sake of some greater grandeur.

Occasionally you sense that beneath sheer front, the songs aren’t always particularly sturdy. The closing number, “Goodnight, Travel Well”, a tribute to parents who’ve been fallen ill or passed away, desperately tries to will itself into an epic but falls a little flat, a symphonic showstopper in search of a song.

Yet even when the songs feel a little half-baked, when the stylistic havoc and production feels almost absurd, you have to admire the chutzpah and glorious gall. You wonder what America will make of the sheer camp fun of it. And how all this flamboyant abandon will go down with straight-ahead indie kids. At a moment in their career when they might have easily consolidated, been scared back to basics and written an album play-safe indie-disco floorfillers, they’ve dared to push themselves further. It may well be a huge, reckless gamble. But what could be more Vegas, baby?

Day and Age features steel drums, sax breaks, disco and orchestration. Was there anything you rejected for being too far out or cheesy?

I don’t think there is any such thing as a bad instrument, only bad uses of instruments. We don’t go into the recording process thinking that we will use saxophones or steel drums or any other instruments, for that matter. We take it on a song by song basis and use what the song calls for.

How much of 80s influence on the record comes from Stuart Price?

People shouldn’t presume any 80’s influence comes from Stuart. We grew up in the 80s. We also listen to records from the 60s, 70s, and 90s, as well. I don’t think this record has any more influence from that era than any of our other records.

Did you ever worry that the stylistic variety of the record might alienate some of your audience?

We don’t make music to be played in a vacuum. We just try to make the best songs possible, and the songs we choose for singles are songs we hope will get radio play worldwide.

If Sam’s Town was about the reality of Vegas, is this record about coming to terms with the neon fairytale myths?

Sure. That sounds good.

“Human” feels like an argument between the Pet Shop Boys side of the band and U2 side. Who wins?