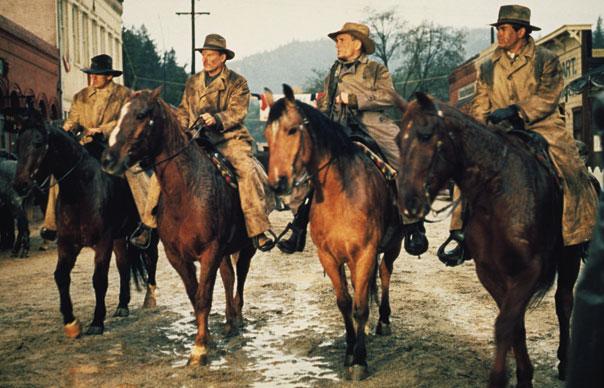 Jesse James, the folk ballad tells us, stole from the rich, gave to the poor, and had a hand and a heart and a brain. Ever since Tyrone Power saddled up for 1939’s Jesse James, the movies have gone along with this. Even iconoclasts like Nicholas Ray and Sam Fuller, in I Shot Jesse James (1948) and The True Story Of Jesse James (1957), adhered to the image of the outlaw as a dangerous but sensitive Robin Hood of the border, whose murder was a loss of innocence for The West.

Ray’s film included a scene replaying one of the most famous tales of Jesse: that of the poor old widow, about to be forced from her home by the banker who holds the mortgage. James gives her the cash to pay the man, then ambushes him as he rides away, taking the money back again. More recently, while it looked to interrogate the myth, The Assassination Of Jesse James By The Coward Robert Ford (2007) couldn’t help but burnish it, too, offering Brad Pitt’s Jesse as a brooding, burned-out monument.

Among such company, the Jesse James offered by writer-director Philip Kaufman’s ragged and muddy Great Northfield Minnesota Raid (1971) goes against the grain. As played by Robert Duvall in full, hollering, feral mode, here is Jesse as neither hero nor anti-hero, but instead as a scummy redneck hillbilly: a sly, lying, psychotic little glory-hound, as noble and trustworthy as a rabid dog. Kaufman establishes his revisionist tone early, introducing Jesse as he sits sit side-by-side with brother Frank in a flyblown outhouse, backwoods boys enjoying the opportunity to spend some quality time shitting together.

Long unavailable in the UK, this was Kaufman’s debut as a major filmmaker, another vibrant souvenir of that heroic “New Hollywood” moment when, spooked by changing tastes and younger audiences, studios were reluctantly casting around for new blood. Prior to this, Kaufman, a University graduate with European tastes, inspired by the independent example of John Cassavetes, had made two low-budget, long-hair films, the experimental Goldstein (1964) and Fearless Frank (1967), a scattershot Pop superhero satire. The Great Northfield Minnesota Raid marked a huge leap forward, but the ironic attitude remains. It fits into the cynical, blood-soaked western wave ushered in by Sam Peckinpah, but, if anything, it’s even less romantic about cowboy myths.

Revisiting the film, it’s striking how much it foreshadows Kaufman’s great later work in The Outlaw Josey Wales (which Kaufman wrote, and started to direct, until Clint Eastwood kicked him off) and The Right Stuff. The former’s shagginess, and shaggy-dog qualities begin here. More fascinatingly, it prefigures the ambivalence of his compellingly strange adaptation of Tom Wolfe’s book on America’s first astronauts. In both movies, Kaufman seems to want heroes to believe in, and simultaneously to subvert that whole notion.

The closest he can find to a hero here is not Jesse, but his usually overshadowed partner in crime, Cole Younger, played, in a brilliant, unshowy performance by Cliff Robertson, who co-produced. (Watch him in this and Fuller’s Underworld USA, and wonder why he was never better known.) Cast by Kaufman as the true brains of the James-Younger gang, Cole has his flaws – this is a film about thieves and con men, killers, bounty hunters and lynch mobs, after all – but he’s the best man in sight. Perhaps even a visionary.

Set in the late summer of 1876, as the fracturing gang of train-robbers are hunted by Pinkertons employed by the railroad, the movie belongs to the times-changing subgenre of the western. Fascinated by the gadgets beginning to appear in the streets and shops around them, Cole is mesmerised by the dawning modern age, delighting in “machines run by steam, oil and electric,” two of which – a steam-powered calliope, and a safe’s clockwork time-lock – will play significant parts in his downfall during the disastrous attempted bank heist of the title.

Cole is a visionary in the other sense, too. While Jesse fakes babbling fits of speaking in tongues, Cole is genuinely battered by visions, glimpses of images that turn out to be fragments of his own bloody future. Kaufman’s film has a very broad streak of very broad humour, but in these odd, unexplained moments, he sends strange gothic shivers running through it. He restages that story about Jesse and the old widow woman, too, but adds a new epilogue: Jesse subsequently kills the old woman, then disguises himself in clothes he’s stripped from her body, so he and Frank can slink off and escape, leaving the rest of the gang to get slaughtered.

The best way to watch Kaufman’s movie would be in a double-bill with Walter Hill’s masterly take on the same story, The Long Riders (1980), following the same James-Younger gang as they ride toward bloody destiny through the same post-Civil War Missouri landscapes, wearing the same long white duster jackets. Spare, elegiac, achingly autumnal, Hill’s brilliant movie is a like a poem, or, more accurately, a ballad. It prints the legend. Kaufman’s treats the legend as a dirty joke, and rips it up.
EXTRAS: None.
Damien Love