Paul McCartney soars out of his comfort zone 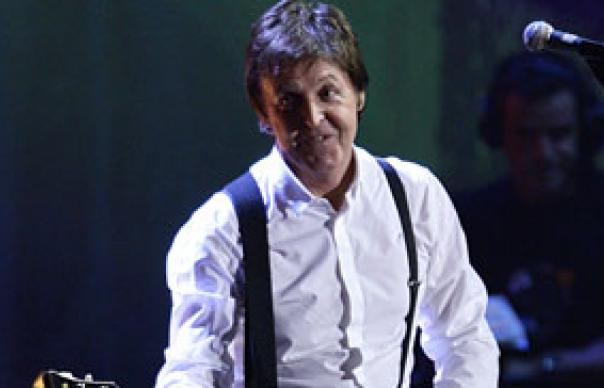 Yes, he may have hammered the point home a little gracelessly at times. But nevertheless, Many Years From Now – the 1997 biography virtually dictated to Barry Miles by Paul McCartney, made a convincing case for McCartney as the Fabs’ chief experimenter. John may have written and sung “Tomorrow Never Knows”, but long after he went home, it was Paul who worked into the night fashioning tape loops to drop in lieu of a guitar solo. Famously, for “A Day In The Life”, it was Paul – apparently, wearing a red butcher’s apron – who overrode George Martin’s misgivings and freighted in the New Philharmonia to create the song’s iconic 24-bar happening.

All of which, is fine, of course. But there’s something a little odd about Sir Macca’s eagerness to remind us that he was the Fabs’ first avant-gardist, while – even during the relative creative upswing of recent years – seeming reluctant to re-engage with that spirit. One suspects the real problem for McCartney, has been an inability to measure the success of his projects by any means other than record sales and the mainstream appeal upon which those sales are predicated. On the rare occasions McCartney has strayed from his musical comfort zone, he has shown reluctance to attach the Paul McCartney “brand” to anything other than a relatively narrow area of music.

Hence, in 1993, when he first hooked up with producer and Killing Joke bassist Youth for a dance music project, it was as The Fireman. Their debut, Strawberries Oceans Ships Forest, was a series of digital pictures seemingly designed to ease the digestion of a full English at Café del Mar. Though commendable in its way, it also served to heighten your exasperation. Why couldn’t Peculiar Paul and Populist Paul coexist on the same record, just as they once did in The Beatles?

Ten years after McCartney and Youth’s last collaboration, Rushes, it’s fair to say the world wasn’t gasping for a third instalment. By the same token, the world would surely prick up its ears if it knew that Electric Arguments is audibly, immediately, a Paul McCartney album, sung and written by Macca, played on “real” instruments – imbued at every turn with a questing curiosity that, at this stage, no one had any right to expect. And far from allowing you to gradually realise the fact, the opening song, “Nothing Too Much Just Out Of Sight”, explodes into action with a miasmic slo-mo peal of blues-rock guitar and a hoarse Macca delivering a predatory vocal display over the top of it. If the idea is to blow away the misgivings of anyone who diligently put the hours into previous Fireman projects, then it works like a dream.

Speed seems to have been the key here. With McCartney and Youth setting themselves the brief of creating 13 songs in 13 separate days, it’s perhaps not surprising that Electric Arguments feels like a series of distinct dispatches, albeit from the same holiday. At one extreme lies “Is This Love?” – a beatific Pacific gospel hymn with a choir of woozy Maccas singing “Bring my baby home to me”; at the other, the sonic mains-surge of “Highway”. In a blind taste test, we’d be here for some time before guessing the singer of the brooding, beautiful “Travelling Light”. Indeed, the sound of Macca’s cracked 66-year-old falsetto duetting with his careworn deeper register, sounds like something Isobel Campbell and Mark Lanegan accidentally left in a cab on their way to the studio. For some bands, the studio can feel like a place of incarceration. One suspects that, having spent much of last year negotiating the legal fallout from his divorce from Heather Mills, the studio must have felt like an oasis of liberation – more so for the fact that McCartney was free from his EMI contract.

Indeed, in December last year, McCartney castigated his record company of 45 years for having become “boring”. Even in more understated moments, that’s one adjective you’d struggle to level here. Seemingly bored with waiting for Lee Mavers to re-enter the studio and make another La’s record, the analogue angels of his mind seem to have jumped ship and gifted Macca the sonorous acoustic sunburst of “Sing The Changes”. Over wire on snare, the sun-dappled strum of “Two Magpies” evokes Nilsson’s 1972 beauty, “Turn On Your Radio”.

If you remember “Dance Tonight” – the pungent hors d’oeuvre of red herring that commenced last year’s first post-EMI album, Memory Almost Full – you won’t be encouraged to learn that Macca has once again picked up his mandolin for “Light From Your Lighthouse”. This time, however, there’s meat on these musical bones, pushed along by a lugubrious boom-thump and a chorus that comes with its own ready-made campfire glow.

Of course, it’s hard to think of campfires without thinking of what people do around campfires. Just as Mrs Merton famously asked Debbie McGee what attracted her to “the millionaire entertainer Paul Daniels”, there are times when you feel like impishly asking Sir Paul what prompted him to reconvene his occasional liaison with evangelical rock stoner Youth.
Much of what happens in “Universal Here, Everlasting Now” can probably be extrapolated from its title: the disembodied reverb-drenched voices, the birdsong, the billowing clouds of Orbular noise. But here, and on the pastoral spook-pop closer “Don’t Stop Running”, it’s hard not to thrill at the zeal with which diems are carpe’d and ancient habits resurface. As if found on a scrunched-up piece of paper in a 40-year-old jacket, McCartney sings the title of the latter over and over again, as if determined, this time, never to forget.

Depending on which Paul McCartney you like the most, you may or may not like what he’s done. But the best thing about Electric Arguments is that it sounds like the work of someone who doesn’t give a stuff what people are going to think. About time, too.