THE FALL – YOUR FUTURE OUR CLUTTER

Mark E Smith takes aim at new targets – as per – on 28th LP… this time gunning for Uncut... 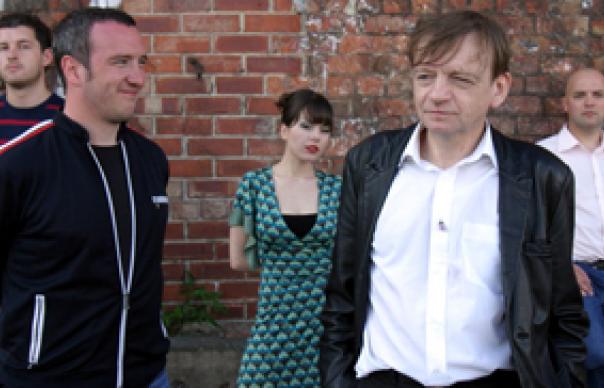 As with the British royal family, The Fall are something about which nearly everyone has an opinion, but only one person can truly be said to have a say.

In the court of Mark E Smith, who has presided over The Fall for 27 studio albums, key players in the hierarchy – wives included – come and go much as they did in the Tudor court, dispatched to fates too terrible to imagine.

Who can guess at their crimes? A man driven by choleric moods and distempers (“pique” sounding a little effete), Smith’s endless capacity to give and take offence has led to a brisk staff turnover, but it is also the force that helps drive his music. His imagination flickers into life to plot the band’s course – but it’s his anger that is The Fall’s engine. On previous albums he has derided contemporaries, social and musical trends. On the 28th, he charts new territory, coming after Uncut.

By way of backstory, it’s necessary to explain that about two years ago, Ben Marshall from this magazine talked to Smith for his regular column, a spirited interview. Events unfolded in a faintly bizarre fashion, a fact that evidently riled the singer. Duly, at the close of “Bury Pts 1+3”, Smith can be heard to say that the best way for a town to rid itself of grey squirrel infestation is, “By reading Ben Marshall’s articles/Or recordings of his vile manufacturing…”

While Fall reviewing convention dictates saying that the album contains the best thing the band have recorded for years, it’s worth remarking that “Bury Pts 1+3” is one of the best things The Fall have recorded for years. An older, louder and far grumpier cousin of “Paintwork” from 1985’s This Nation’s Saving Grace, “Bury…” is a savage sonic collage, beginning with what sounds like The Fall playing The Streets’ “Fit But You Know It” as heard through a hearing aid, then delivering Smith’s terrible ire: “You will suffer all the seasons on the sides of municipal buildings/ and used to stop draughts in glass fronted art homes…”

Oddball, but articulate, brimming over with a delight in language, “Bury…” is a wonderful example of Mark Smith’s transformative science fiction, and pretty much what one would hope to find on The Fall’s first album for Domino records. With a successful volume of memoirs, Renegade published last year, Smith’s public profile is at its zenith. Perhaps, positioned on one of the UK’s most respected labels – and home to Von Südenfed, Smith’s excellent collaboration with Mouse On Mars – you imagine, Your Future Our Clutter will now mark a return to “classic” Fall.

Well, as if that was ever going to happen. The Fall, lest we forget, operate on an impregnable paradox: The Fall are about change, not nostalgia. You’re looking for something that sounds like your idea of The Fall? Well, then you’re not a proper Fall fan, are you? One either accepts what The Fall are up to now, or perishes. When, again in “Bury” Smith barks “a new way of recording/ A chain round the neck”, one wonders if he has lately been brought to account, by some higher power, on just this same point of quality control.

As it turns out, things are well in order here. Nothing on Your Future Our Clutter quite scales the heights of “Bury…”, it’s true, but there proves to be some wisdom and mileage in the band’s favoured garage/synth prog. “Cowboy George” has some particular depth – what sounds like it’s shaping up to be a novelty song morphs into something else entirely, the song’s style imitating its narrative, much as many years ago did the band’s “Paranoid Man In Cheap Sh*t Room”. “Mexico Wax Solvent” recounts a visit made to the doctor for a “clicky shoulder”. There are intriguing mentions of expats, Murder She Wrote, and Castleford, if few actual tunes.

Listening to Your Future Our Clutter, however, you’re reminded of a scene in the BBC4 documentary about Mark E Smith, in which he was observed presiding over a Fall session, and exhorting his band (once his lads, but who he now called his “kids”) to “hit it harder!” Well, they do: this is a band who play like enforcers, heavies brought in to see no-one steps out of line.

Perhaps it’s only fitting. Vigilance. A right way of doing things. These are very much Mark E Smith’s cornerstones, as if the punitive musical tack his band have pursued lately has been a hardline response to a world that doesn’t get it. Indeed the last line on the album is Smith muttering “You don’t deserve rock’n’ roll…” Right now, though, the world is in danger of finally coming round to his way of thinking. Will Mark E Smith make any concessions to letting them in?
JOHN ROBINSON