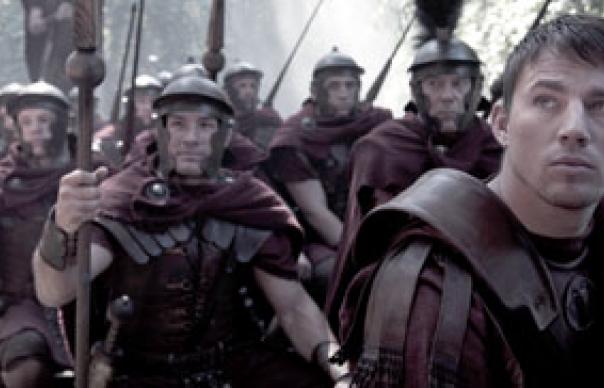 It’s a grim, savage place, as the occupying Roman forces have learned to their chagrin. 20 years before the events in the film take place, the Ninth Legion disappeared into the Scotch mists, never to return. As the film opens, an ambitious young Centurion, Marcus Aquila (Channing Tatum), assumes command of his first garrison. He hopes to redeem the family honour – his father had led the Ninth – and taking his native slave Esca (Jamie Bell) as a guide, Aquila heads into the wilds beyond Hadrian’s Wall to search for the legion’s standard, the gold Eagle of the Ninth.

Macdonald’s film has the makings of a rip-roaring boys’ adventure, but is not without its problems. Adding contemporary resonance, Macdonald makes his occupying Roman force speak with American accents; yet the natives all speak a traditional Celtic dialect. It’s a weird cultural disconnect that’s hard to shake. The bromance between Aquila and Esca feels under-developed, too; Bell is good as the near-feral Esca, but Tatum’s performance is particularly wooden. He seems a less than inspiring leader of men. Macdonald gives the battles a good gritty, dirty feel, while a key sequence where Aquila and Esca deceitfully parlay friendship with a dangerous Celtic tribe grips.