The Decemberists – What A Terrible World… 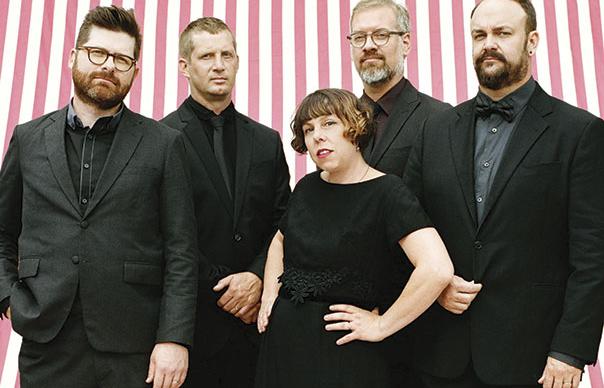 In April 2007, Uncut reported on the rise of a new generation of North American college rock bands. Responding to the successes of bands like Arcade Fire, the Shins and Modest Mouse, we asked how literate, theatrical, geeky indie rock bands were all of a sudden taking charge of the charts and selling out arenas. Among the bands featured were Portland, Oregon’s The Decemberists, led by Colin Meloy, who had recently released their major label debut, The Crane Wife. As it transpired, things continued to progress propitiously for The Decemberists: their last album, 2011’s The King Is Dead, reached No 1 on the Billboard charts, selling 94,000 copies in its first week of release.

At their best, the earliest Decemberists recordings were playful and roguish, full of seafaring yarns and shape-shifting demons, whose detailed storylines and demanding arrangements often concealed a potentially popular sound beneath. But The King Is Dead tempered some of their fussier aspects; the album even featured extensive cameo work from Peter Buck, a musician not known for idiosyncratic noodling. The album’s success paid off: following its release, the band contributed to The Hunger Games soundtrack, and appeared on both The Simpsons and Parks And Recreation. What greater accolades could an indie band from the Pacific Northwest possibly want..?

Since then, the band have been on hiatus following multi-instrumentalist Jenny Conlee’s recovery from breast cancer treatment and Meloy’s burgeoning sideline as the author of a successful young adult fantasy franchise. They return with What A Terrible World, What A Beautiful World. The relative simplicity of The King Is Dead suited Colin Meloy’s strong melodic gifts; and What A Terrible World… continues to sharpen the band’s sound. The rough-and-tumble folk is suffused here with girl group ‘doo doos’, indie jangle, and even reaches for the loose, jazzy vibes of Astral Weeks – on the beautiful “Lake Song” and “Till The Water Is All Long Gone”.

That album opens with “The Singer Addresses His Audience”, a sardonic take on the slippery nature of rock’n’roll success and the compromises made along the way, in which a fictitious frontman confesses, “We’re aware that you cut your hair in the style that our drummer wore in the video / but with fame came a mounting claim for the evermore” topped off with the wryly disingenuous caveat: “We did it all for you”. It spins off into suitably histrionic string arrangements, Jim Steinman-style choirs and squawking guitar solos. So far, so droll. “Cavalry Captain” foregrounds the romantic aspect of Meloy’s songwriting – “we’ll be away on the light brigade / and if only for a second, if only for a time, and if only for a second / we’ll be alive” – set against thrilling brass arrangements. The Spectorish swoon of “Philomena” finds Meloy at his most Morrissey – “long summer days can lead to lazy vices / boys all at idle left to their own devices” – while “Make You Better” is more evidence of Meloy’s affinity for a certain kind of indie aesthetic (The Catchers or perhaps a rockier The Field Mice spring to mind). Later, with “The Wrong Year”, Meloy explicitly mirrors the deft melodic lilt of Johnny Marr in his Smiths’ heyday.

Meloy’s singing is at its best on “Lake Song” and “Till The Water’s All Long Gone”, both of which find him adopting a softer, more intimate delivery. On “Lake Song”, strip away the Morrisseyisms (“I, seventeen and terminally fey”) and you’re left with a wry, bookish yarn about the narrator’s formative romantic fumblings: “you, all sibylline, reclining in your pew, you tattered me, you tethered me to you”. Another highlight is the understated country blues of “Carolina Low”, which comes couched in violence – “Did you crack your lip? Did you skin your knee” – while the fate of the narrator remains ominously unspecified: “I’m bound for the hilltop”. Meloy has a tendency to overwrite, but “Carolina Low”, with its compact narrative, benefits from smart self-editing skills. Less successful is the ersatz folk of “Better Not Wake The Baby”, with its wheezy accordions and Mumfordized chorus. “Anti-Summersong” – a companion piece to “Summersong” from The Crane Wife album– has pleasing touches of early, alt-country Wilco. “Easy Come, Easy Go” is another opportunity for Meloy to flash his chops as a lyricist – “It was a moonless night, the stars a limning light” – for a pulpy, cautionary tale about lives lost through casual mishap.

Previous Decemberists albums have often been tied to a concept – none more so than 2009’s Hazards Of Love, a fairy tale about a maiden and her misadventures with vengeful forest sprites. If anything links What A Terrible World…, though, it’s more ruminative, first-person pieces like “Mistral” and “12/17/12”. In the former – a big song with a warm, uplifting chorus – the narrator finds himself abroad and “eking out a little joy from what awaits back in the States”. “12/17/12”, apparently written after watching Obama address the nation after the Newton school shootings, is carried on exquisitely simple, country-inflected melodies. “O my god, what a world you have made here”, Meloy half-whispers. It is the most straightforward and affecting song on the album, shorn of elaborate wordplay and quirky arrangements. You might wish he’d tackled more of the record in this way.
Michael Bonner