THE DECEMBERISTS – THE KING IS DEAD 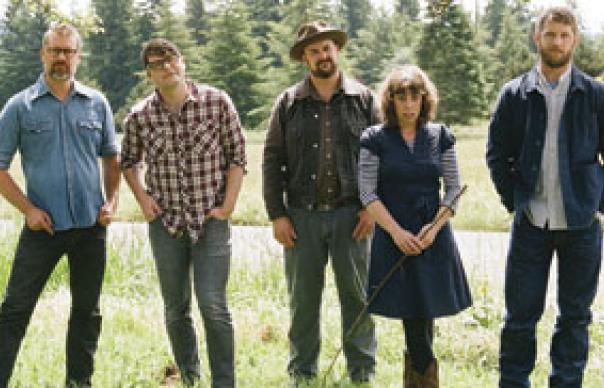 The Decemberists have sometimes been daunting. 2009’s The Hazards Of Love, which took its title from a 1964 EP by the English folk singer Anne Briggs, was, for instance, nothing less than a full-blown concept album, a 17-track song cycle about the seduction and ravishing of a fair damsel named Margaret by a shape-shifting demon and otherwise populated by a serried cast of faeries, forest queens, rakes and other chimerical characters, the phantasmagorical story on the whole set to the kind of elaborate prog-folk not heard since the cod-pieced heyday of Jethro Tull.

You could have seen this coming, of course. The powerful early influence of The Smiths was still evident even as far into The Decemberists’ career as their third album, 2005’s Picaresque, especially on songs like “We Both Go Down Together” and “This Sporting Life”, which were delivered by frontman Colin Meloy with all the necessary flourish and swoon of vintage Morrissey. But at the same time, however, on tracks like “From My Own True Love (Lost At Sea)” and especially “The Mariner’s Revenge Song”, there was equal evidence of Meloy’s immersion in British folk, especially the recordings of Shirley Collins, which provided him also with the content for the “Colin Meloy Sings Shirley Collins” EP he recorded to sell on a 2006 solo tour.

The blustery musical weather to come was more accurately forecast, however, on an earlier, single-track EP, from 2004. “The Tain” was an 18-minute track in five movements based by Meloy on the seventh century Irish mythological epic, Táin Bó Cúailnge, which featured a heavy metal overture and the kind of bombastic rock riffs that at first seemed wholly unlikely coming from this most bookishly literate of bands. It was something their fans would have to get used to, though.

On The Crane Wife (2006), Meloy turned to Japanese fable, Shakespeare, the American Civil War and the Siege of Leningrad as the inspiration for the content of his songs and, rather more regrettably, The Strawbs, Jethro Tull and even ELP for rather too much of the music, specifically the 12-minute suite, “The Island: Come & See/The Landlord’s Daughter/You’ll Not Feel The Drowning”.

The Hazards Of Love, though, was the apotheosis of The Decemberists’ musical drift towards complex time signatures, gloomy chord changes, ponderous riffs, more words than a dictionary for every song. The record came with a carefully annotated lyric sheet, to help you follow the convoluted narrative, but you’d have been better off negotiating the looming musical landmass of the album with a road map. There was, in fact, so much of it that it was often easy to overlook the singular virtues of individual tracks. “The Hazards Of Love 2 (Wager All)”, “Isn’t It A Lovely Night”, “Annan Water” and the closing reprise of the title track, “The Hazards Of Love 4” were all unquestionably beautiful. Such was Meloy’s dedication to The Hazards Of Love that he couldn’t resist taking it on the road and playing the thing in its entirety. The experience was exhausting for both the band and its audience and by the end of the tour even Meloy felt the need for something less wilfully complex and testing. So here’s The King Is Dead, The Decemberists’ most immediate and outgoing album. Meloy has been happily candid about the music that’s helped shape his songwriting here, Neil Young and REM just two of the influences he’s mentioned on The King Is Dead and its stirring blasts of country rock.

You can hear Neil in the banks of acoustic guitars, pining pedal steel and harmonica gusts that blow through the bulk of the album’s 10 tracks, the bucolic strum of Harvest an obvious template. Gillian Welch on seven numbers adds wonderful harmonies, intended, you suspect, to recall Nicolette Larson on Comes A Time. The REM influence is even more marked, especially, as you might expect, on “Calamity Song” and “Down By The Water”, both of which feature Peter Buck on electric guitar (he plays mandolin on album opener “Don’t Carry It All”). The former particularly recalls “Me In Honey”, and both take you back to the days when REM would regularly take your breath away, in a manner they haven’t done for years.

You have to say the relative simplicity of The King Is Dead suits The Decemberists entirely. These songs and performances sweep you up in much the same way as The Waterboys’ Fisherman’s Blues. There’s not much about the album that isn’t glorious, Meloy’s sublime melodic gifts, allowed here to shine, dazzlingly so on tracks like “January Hymn”, its companion piece, “June Hymn” and the closing “Dear Avery”. The first of this trio is a sweet reverie about the people we leave behind us, Meloy recalling his Montana childhood, the “fleeting beating of hearts” too soon separated by life’s capricious unfolding, with a tune that carries an evocative echo of “Mr Tambourine Man”. “June Hymn”, meanwhile, with its lovely Gillian Welch vocal harmony, is as uncomplicated as anything Meloy will ever write, a love song to a place and time that can perhaps never be returned to, an unattainable bliss. “Dear Avery” is another sublime essay in memory, separation and regret, its luminous hurt enhanced by the sighing voices of Welch, Dave Rawlings and Laura Veirs.

Because of what’s gone before, there’s an irresistible urge to look for an over-arching concept, something that will bind the songs on The King Is Dead thematically, as if on their own they may lack significance. If there’s something that links them, I guess it’s notions of standing up for what you believe in, being brave in the roughest of times, a willingness to pay the price for being free. It’s an admittedly unfashionable idea these days, but self-sacrifice for the greater good is also something Meloy puts forward here as a Good Thing. So “Don’t Carry It All”, with its thrilling fiddles, encourages a sharing of the load among the weak and the strong, in uplifting socialist terms, the song a celebration of communal responsibility. “Rise To Me” and “This Is Why We Fight” are, similarly, rousing calls to arms that make you want to storm the nearest barricade, possibly carrying a flag.
ALLAN JONES

Q&A Colin Meloy
While working on The King Is Dead, did you listen to Neil Young, REM or any of the music that inspired it?
Those records are never far from the record player. I know Reckoning inside and out, but the mastering job on the reissue was so fantastic that listening to it reconnected me with some of my early, primal influences: REM, Robyn Hitchcock, Camper Van Beethoven and things like that.

Bringing in Peter Buck and Gillian Welch seems like a natural extension of the concept.
With Peter Buck, that was a no-brainer. As for getting Gillian on board, in a certain genre – Young’s Comes A Time and Gram Parsons’ GP, going back to Dolly Parton and Porter Wagoner – there’s often the marrying of a male and female vocal hot in the mix, two voices with a solid identity. We wanted to pay homage to that kind of music.

You give Buck some competition with your 12-string playing on “This Is Why We Fight”.
I’m doing my Johnny Marr impression. I’ve listened to The Smiths so much that that pattern is ingrained in my skull and my muscle memory.

So you’re playing your record collection more on this album than you ever have.
On the last couple records, I’ve been playing a certain section of my record collection; this one grabs from all sides.
INTERVIEW: BUD SCOPPA