THE DEAD WEATHER – SEA OF COWARDS 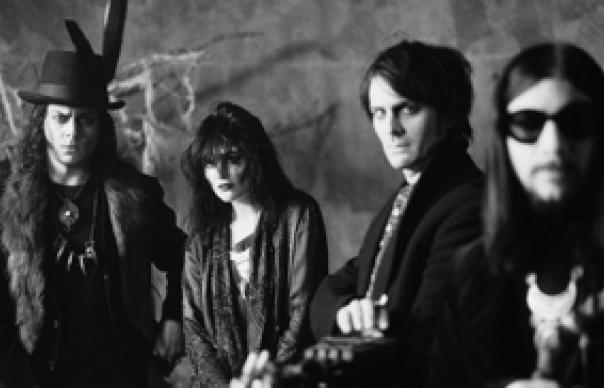 For all his achievements, Jack White is not a man to romanticise the creative process. Rather than waiting for the muse, White is someone who diarises a meeting with that muse, who treats the business of creativity in refreshingly practical terms.

Talking to Uncut about the last White Stripes album Icky Thump, White described his and Meg White’s efforts in terms of manual work: making the album was like packing boxes “and shipping them to Switzerland.” If you wanted a visual anecdote for his method, it’s hard to better the trailer for It Might Get Loud. On his porch, White builds a primitive guitar from a plank. Immediately, he begins to play.

The Dead Weather are the latest band to have emerged from White’s restlessness. In an 18-month period which has seen the opening of Third Man records in Nashville, White’s production for raw-voiced rock legend Wanda Jackson, a recording session with Jay-Z, and even a decent record by his wife, Karen Elson, the band have also swiftly followed up their hectic debut, 2009’s Horehound.

The drummer, producer, and occasional vocalist for the project, this is a band who very much fit in to White’s scheme. If The White Stripes are to be discerned by the colours red, white and black, and The Raconteurs by their signifier of copper, then The Dead Weather might be best represented by black leather. Comprising his Raconteurs associate Jack Lawrence, Alison Mosshart from The Kills and Dean Fertita from Queens Of The Stone Age, this is a band comprised of folks whose day jobs are in high level, modern rock’n’roll.

Never is this more evident on Sea Of Cowards’ best track, “Gasoline”: where we witness what could once have been unselfconsciously described as “twin guitar fireworks”. This is not, however, simply a display of virtuosity for its own sake, but something much more interesting: essentially, Fertita and White get to trading licks, but in doing so go beyond the bounds of good taste, the high-pitched wailing and bickering of their guitars both thrilling and funny, fully cognisant of how absurd, and yet how brilliant is the nature of their competition.

This, undoubtedly, is wherein lies the value of The Dead Weather. In the past, White has spoken of how, since the possibility of making entirely “new” music remains a pretty remote one, the way forward for him will likely be to go deeper into what he already knows. It’s duly hard not to think of The Dead Weather as a kind of research lab into the gestures and history of rock’n’roll.

In the best-case scenario, all of Sea Of Cowards would deliver material as exciting as “Gasoline”, but what the band often come up with are familiar strains of vaguely gothic blues rock. Things open promisingly with “Blue Blood Blues”, sung by White, and with “Hustle And Cuss”, which is like a potted history of British heavy rock, referencing Zeppelin, and with organ swells redolent of Deep Purple. Less convincing, though are “The Difference Between Us” and “I’m Mad”, segued together, really more grooves than actual songs. It’s a pattern redeemed by “Jawbreaker”, however, where more heroic soloing lifts things out of the ordinary.

In fairness, Sea… doesn’t outstay its welcome, with many of the songs under three minutes, the product of the intense studio sessions for which the band are famed. (While I was listening to the album on the bus, the vehicle was struck by lightning, the kind of incident you might imagine might delight The Dead Weather.) One wonders if more time spent on the composition, rather than relishing this profusion of creativity might have yielded more significant results, but it’s hard to see how that would fit in with White’s plans. This, after all, is someone who seems to want to compete on every level. He wants success, but to keep his conscience clean. He’s started an indie label, but is releasing this through Warners (the last was on Columbia, while White retains association with XL). He wants to swim with the sharks while retaining the integrity of the small pond.

Sea Of Cowards is undeniably a major rock record in terms of production and personnel, but is caught between two camps: what it contains is neither major, nor indie, simply enjoyably minor.
John Robinson