The Dark Knight – The Uncut Review!

Batman: back in the black 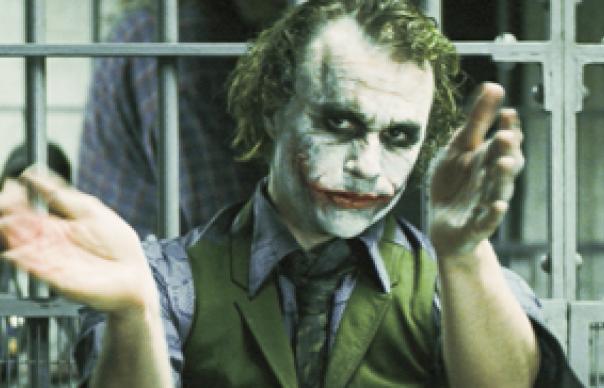 One of the more satisfying subtexts British director Christopher Nolan teases out of The Dark Knight is that it takes a freak to catch a freak. And what a freak. You might think that the idea of a man donning a giant bat costume made of Kevlar to fight crime is, in itself, weird enough. But wait until you see The Joker, dressed in his strange, mottled clothes; a stained coral green waistcoat and purple shirt. There’s the perpetual smile, a swollen red streak like an open wound stretching out from the corners of his mouth, made more prominent by the ghastly white make-up that looks like it’s melted into his skin. His eyes are ugly black circles, his straggly hair a rank, piss-stained yellow. This, you might reasonably assume, is some distance from the camp Vaudeville ham of Jack Nicholson’s Joker in Tim Burton’s 1989 Batman movie.

In fact, plenty has already been made of Heath Ledger’s fearless interpretation of The Joker. Some have even suggested the role partly contributed to his accidental death, on January 22 this year, from an overdose of prescription drugs. A long-term insomniac, Ledger seems to have found it especially hard to switch off after playing the part. He’d certainly taken the role extraordinarily seriously, reportedly spending a month holed up in a London hotel on his own, practising voices, posture and nailing the character’s psychology, even writing a diary “as” The Joker. Whatever the long-term repercussions, this assiduous preparation is certainly palpable in Ledger’s performance. Ledger’s Joker is a brilliant study of a sociopath; a feral, amoral lunatic motivated by chaos, the kind of figure who blows up hospitals, impales a man’s head on a pencil, and “just wants to watch the world burn”.

With Batman Begins, Nolan demonstrated that one of his great strengths as a filmmaker is the way he explores the psychological landscape of his characters. He’s clearly got a lot to work with here, and along with his co-writer brother, Jonathan, gets stuck in scrutinising meaty ideas of identity, duality and obsession that bind his cast of freaks together. Fairly radical subject matter, you might think, for a comic book movie with a budget hovering around $180 million. As The Joker tells the Batman: “I don’t want to kill you. What would I do without you? You complete me.”

Watching the way Nolan shoots Gotham (or its stunt double, Chicago), and you’re forcibly reminded of the way Mann filmed LA in Heat. There’s a similar fetishising of ultra-modern concrete and glass cityscapes, the same blue-grey palette. Meanwhile, the casting of William Fichtner, as a corrupt bank official in the film’s astonishing opening heist sequence, is the most playful nod to Mann’s film, in which Fichtner also appeared.
That said, The Dark Knight isn’t just about the Batman and The Joker. While much the opening two-thirds of the film focuses on The Joker’s explosive destructiveness, Nolan runs it in tandem with the rise of Gotham’s newest District Attorney, Harvey Dent (Eckhart), “a decent man in an undecent time”, who’s prepared to risk his life taking a stand against Gotham’s numerous organised crime families.

Dent, it’s no great secret, becomes Two-Face in the latter part of the film; a man with his own peculiar take on duality and obsession, who decides the fate of his victims on the toss of a coin. The arc of Dent’s story – from crusading public official to murderous, deformed vigilante – provides The Dark Knight with arguably its most conventionally satisfying narrative trajectory, played admirably straight by Eckhart. It’s a smart counterpoint, too, to The Joker’s own force-of-nature insanity that arrives fully formed at the start of the film. As you might expect, though, with the introduction of a new villain so late in the game, the pacing of The Dark Knight shifts awkwardly around the 90-minute mark.

It seems a perennial problem with the comic book movie genre, that more is frequently perceived as better. And back to those Mann comparisons, it seems that Nolan also shares Mann’s dislike for cutting excess material. So, a lengthy digressionary sequence set in Hong Kong could have been lost, as could a set-piece involving two boats each with a bomb on board. That’s approximately 40 minutes of porridge that could have been ditched without too many tears being shed.

But, perhaps inevitably, you’re left with the enduring image of Ledger, made up like the star turn in a carnival from Hell. “Criminals in this town used to believe in things. What do you believe in?” The Joker is asked early in the film. He replies in a weird voice, slightly slow and awkward, as if he struggles to find the right shape for the words in his head.
“I believe whatever doesn’t kill you only makes you strange.”