Three brothers. On a train. In India.. 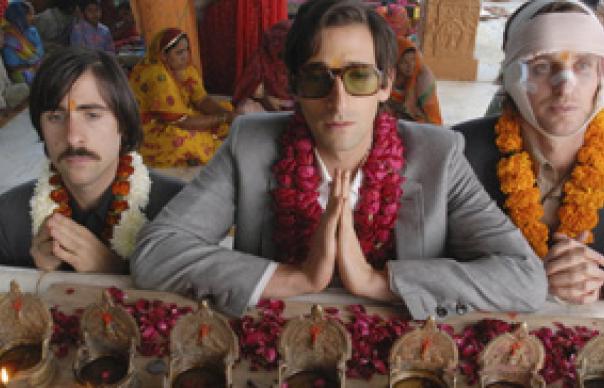 
SYNOPSIS
The Whitman brothers, Francis (Wilson), Peter (Brody) and Jack (Schwartzman), grieving from the death of their father, embark on a train journey across India, which Francis hopes will end with them reuniting with their nun mother (Anjelica Huston). They bicker and mope, flirt with the train’s stewardess (Amara Karan) and manage to misplace a snake, to the displeasure of the train’s chief steward (Waris Ahluwalia) who kicks them off the train, forcing them to think afresh about the purpose of their journey.


Before the main business of The Darjeeling Limited gets under way, Wes Anderson indulges himself with a short film, called Hotel Chevalier. Jason Schwartzman is on a bed in a hotel room, ordering a cheese sandwich. This being Wes, the room is brightly-coloured. The phone rings. It’s Natalie Portman, who comes to the room. She has her hair cut like Jean Seberg in A Bout De Souffle. Oddly, this doesn’t seem to impress Schwartzman. They lie around on the bed symmetrically. “If we fuck, I’m gonna feel like shit tomorrow.” Portman says. “That’s OK with me,” Schwartzman replies.

Though brief, Hotel Chevalier is a perfect distillation of the style Wes Anderson established in The Royal Tenenbaums, in which alienated characters endure their angst in a beautifully-choreographed, deadpan way, to a pop soundtrack. (The director is perhaps a little too generous with his reprises of Peter Sarstedt‘s “Where Do You Go To [My Lovely]”).

But, just as soon as Anderson has engaged audience sympathies, he abandons the scene, leaving Portman as the memory Schwartzman is fleeing as he races Bill Murray for a train. Murray’s cameo is perfect, but he misses the train, so he, too, is abandoned, and Schwartzman joins his two brothers, Owen Wilson and Adrien Brody on a train travelling across India.

Anderson is fond of confinement – The Life Aquatic With Steve Zissou was a dolls-house version of life on the ocean wave – and while his interest in design hasn’t abated there are signs here that he is now more relaxed about plot. Stuff happens, some of it good, some bad – and all of it is met with a silent movie shrug from the three glum brothers.

Still, it’s an amazing trip. Darjeeling hurtles through an idealised, fantasy-version of India, but is also an exploration of mood, with the Whitman brothers representing three shades of depression. Francis (Wilson) is the bossy one, despite being comically-bandaged from a suicide attempt. Peter (Brody) is about to become a father, and has neglected to tell his partner that he is popping out to India for a while. Jack (Schwartzman), we know, is still crushed by the infidelity of Portman, whose answering machine he keeps calling, in the hope of finding more evidence of her untrustworthiness.

The screenplay (by Anderson, Schwartzman and Roman Coppola) does have ambitions to say something about brotherhood and spirituality, but Anderson’s sense of style is so strong that sincerity and emotion struggle to be heard. It works better as a road trip that goes off-the-rails, like Down By Law, if Jim Jarmusch had decided to remake it with the Monkees. In India. On a train. With a girl. And a snake.