Grown-up psych-folk from the Scouse collective... 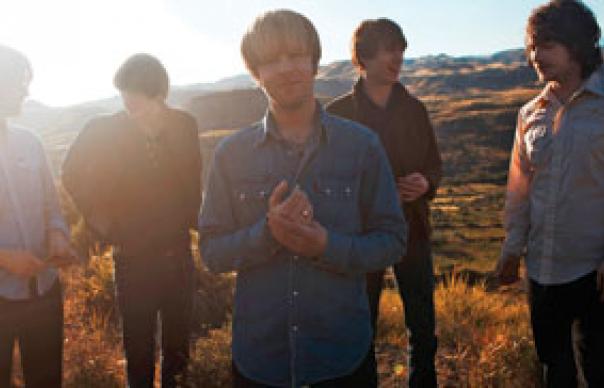 The five members of The Coral are still only in their twenties, but as a band they’ve already had a considerable and serious career.

Close friends who formed a group at school then enjoyed the flushes of success, before seemingly going through the motions, they’ve known little beyond The Coral and have become conditioned to its ways. Instilled from the start with a work ethic that surely rubbed off on their upstart admirers, Arctic Monkeys, the band are incredibly prolific and scored five Top 10 albums between 2002 and 2007.

For all that achievement, this is, however, a band in a local tradition that’s slightly more vulnerable: like psychedelic Scousers Shack and The La’s, the band are sweet-natured romantics, a little frayed at the edges, in thrall to The Byrds and The Beatles. The Coral are sometimes described as a classic British singles band, best known for the chiming ’60s folk-pop of “In The Morning” and “Dreaming Of You”, their extremely agreeable default position being the creation of Beefheart-skewed sea shanties by way of The Everly Brothers. Still, despite this rather glamorous heritage, upon hearing the band’s 2008 greatest hits compilation, Singles Collection, the charm had thinned, their compositional strategies seemed played out, and The Coral looked a little rudderless.

With Butterfly House and its enchanting lead single “1000 Years”, however, a firm hand is back on the tiller and James Skelly’s crew is heading into open water. If the departure of founder member and guitarist Bill Ryder-Jones at the start of 2008 meant The Coral’s sound would have to change – he’d left before temporarily and had quit touring altogether – then their determination to try something a little different has galvanised the band.

The recent best-of drew a line under The Coral’s adolescent phase, and Butterfly House certainly sounds like the work of a wiser, more worldly band with a point to prove. Lushly textured and amply cushioned, their songs are richer than ever and now have a pastoral quality that bears comparison with the shimmering psych of prime Stone Roses or Love. Right from the Morricone twang of opener “More Than A Lover”, Skelly’s baritone is pitched between Richard Ashcroft and Scott Walker, crooning with the emotional authority of a man mightily vexed.

Partly responsible for expanding The Coral’s palette is producer John Leckie – himself, of course, a veteran of work with psychedelic Scousers from The Beatles to The La’s – who wasn’t familiar with their personnel issues, and who fleshed out their spindlier folk songs. As songwriters, the band were no slouches in the past, but on Butterfly House Leckie helps them locate a bountiful seam that leads to as impressive a sequence of tender psychedelia as you’ll find anywhere: with sinuous grace the likes of “Roving Jewel”, “Walking In The Winter”, “Sandhills” and “Butterfly House” unravel tunefully, bathed in echo, tumbling into territory shared by Fleet Foxes and Felt. Add to these the billowing “Green Is The Colour” and the lovely Simon & Garfunkelism of “Falling All Around You” and it crosses your mind to nip outside to check it’s not 1968.

The Coral don’t put a foot wrong on this album, and therein lies its one flaw: by polishing their technique and perfecting their craft, they’ve become slightly less interesting. To return with a sixth album of madcap mop-top tomfoolery would have grated horribly, but in recording a near-perfect period piece, let’s hope they haven’t snuffed out the mischievous spirit that made them so intriguing in the first place.
Piers Martin

Q&A James Skelly
This is the first Coral album since guitarist Bill Ryder-Jones left over two years ago. How does it reflect that change?
Well, it’s us finding our way as a new band. We had to adapt and build on our strengths. We couldn’t do as much jamming so the songs had to be good enough to carry it. We went away and closed rank. In a way, the last two albums were like demos. There’s just a much better working atmosphere to this record – we really worked on the songs and the lyrics.

What did John Leckie bring to the album?
Experience and a fresh look. He’s never worked with us before, didn’t know anyone, didn’t know Bill. We kind of had an idea about how the album should sound, but I suppose if you’re looking to make a psychedelic, layered record, there’s no one with a better CV. He engineered Pink Floyd, he’s got so much experience, and he helped us with all the ideas.

You’re older now. Are you wiser?
Well, as you get older you gain and lose something, don’t you? It’s like you know the magician’s tricks: there’s not as much wonder, but in a way you know a bit more. I used to think that the music was just about us, doing what we want. But I think music is for people to enjoy and play, and when you realise that, you end up enjoying it more.
INTERVIEW: PIERS MARTIN