Black Crowe's head music dives deep into the past... 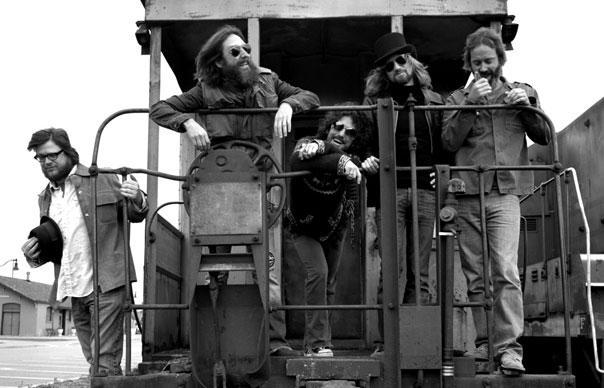 Black Crowe’s head music dives deep into the past…

Chris Robinson’s belief that the occult energy of cosmic rock’n’roll is still capable of shifting the cultural axis has always seemed both heroic and faintly ridiculous. The middle-class suburban kid who put his faith in velvet loons, pre-punk virtuosity and the creative powers of strong weed is a self-confessed throwback, but 22 years after the first Black Crowes album you’d be hard pressed to question his commitment to the cause. As Big Moon Ritual emphatically demonstrates, if you’re going to dive into the past, you might as well dive deep.

The opening declaration from the Chris Robinson Brotherhood, who include in their number ex-Cardinal Neal Casal and former Black Crowe Adam MacDougall, Big Moon Ritual is unapologetic head music. Formed by Robinson with the sole intention of taking the sound as far up and out as possible, CRB spent all of 2011 relentlessly touring California. Suitably bonded, in January they took their show into the studio, recording 27 songs (some of which will be released in October as a companion album, The Magic Door) in six days.

The results are immersive and free-flowing (though not free-form), harking back to rock’s logo-free golden age. You can tell that Robinson has lately been performing with Bob Weir and Phil Lesh. The Grateful Dead’s expansive Cali-country-rock is a key touchstone (the band even has its own enthusiastic community of live show tapers), as are The Allman Brothers, Gong’s lunatic fringe, The Faces and The Stanley Brothers. None of these influences, of course, live far from Robinson’s home turf. Big Moon Ritual might be loose, but in no sense is it an exercise in absolute abandon: though the heads of these seven songs are in the stars, their boots are planted firmly in the certainties of strong, traditional melody.

Each one feels like a little adventure. Opener “Tulsa Yesterday” flips from an immensely pleasing laidback country shuffle to shimmering space-soul, along the way earning the right to every one of its 12 minutes. The terrific “Rosalee” starts with a relentlessly funky clavinet groove – like The Band’s “Rag Mama Rag” let off the leash – then rapidly orbits some distant psych galaxy before burning back to earth. Gratuitous? Sure. Fun? Indeed, especially when Robinson’s rousing “air getting thinner, are we getting high?” refrain slams in, driving the song to its climax.

There’s ample sustenance for the heart as well as the head. As emotionally direct as anything Robinson has recorded, “Beware, Oh Take Care” and “Reflections On A Broken Mirror” are big, tender ballads which showcase one of the great rock’n’roll voices in full flood. “Star Or Stone” is similarly affecting, a slow country-blues reminiscent of Sticky Fingers-era Stones at their most nakedly soulful. Full of ill portent and dark superstition – “I was thirteenth at the table when the wine was passed around” – it’s graced by a particularly elegant, unhurried solo from Casal, who throughout plays a blinder. Cowriter on three songs, his graceful guitar lines bring a silvery lightness to music that could easily become dull and heavy.

In the end, only the clumpy, Moog-laced “Tomorrow Blues” remains earthbound, lifting off only momentarily during a dubby space-rock interlude which falls somewhere between The Doors’ “Roadhouse Blues” and Hawkwind. The sweet, languid closer “A Hundred Days Of Rain”, with its restrained echoes of Neil Young’s “Down By The River”, makes for a much more thrilling ride, and provides one final stage for Casal’s exemplary guitar playing.

For all the length of the songs, The Big Ritual feels like a mere snapshot of some eternal jam session which might very well still be happening as we speak. The prospect of continued despatches from this corner of the stratosphere is a cheering one, particularly as you suspect future CRB missions will travel even further up and out.
Graeme Thomson

Q&A
Chris Robinson
Tour first, record second is very old school…
We purposely set out not to make a record until we’d finished a whole year of touring, which turned out to be 118 shows. Those were the building blocks to our sound and our identity, so in the studio we just set up our road gear and went to it. It was the craziest session I’ve ever done. The true measure of success after 25 years is getting to a place where it feels like we finally have our own commune. This band and this record feels like that.

Does CRB mean an end to the Crowes?
Given a perfect storm I don’t ever see not having this band and not doing what we’re doing. The Black Crowes are important to me, but it’s best not to wake up the bear when it’s hibernating. I don’t have any weird negative feelings about it. Maybe down the line it will happen.

Will CRB tour the UK?
We’d really like to. It’s hard. People asked us, ‘Why did you play so many dates in California?’ Well, because you can drive around with a pound of weed and not get in trouble. Let’s face it, we have priorities as a band.
INTERVIEW: GRAEME THOMSON