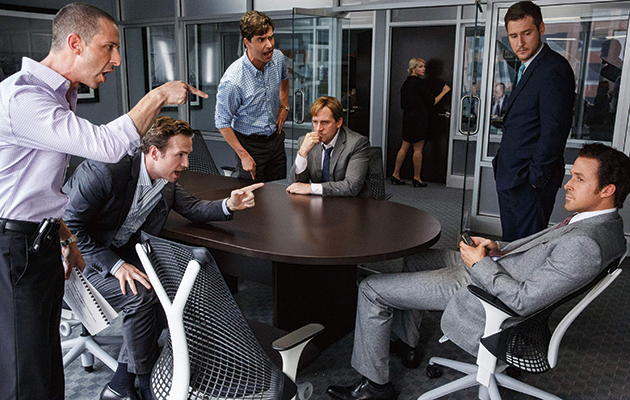 Towards the end of Adam McKay’s new film, two characters stand in the empty trading flood of Lehman Brothers bank following the 2008 crash. “What did you expect to find?” asks one. His colleague shrugs. “I don’t know. Grown-ups?”

McKay’s adaptation of Michael Lewis’ book presents the subprime loan crisis as a screwball comedy, complete with to-camera asides. But perhaps the only same response to the loathsome skulduggery behind the 2008 financial crash is to laugh at it? Just as Martin Scorsese’s The Wolf Of Wall Street presented the career of disgraced Wall Street stockbroker Jordan Belfort as a hoot, so McKay pumps this particular round of despicable financial misconduct for all the laughs he can.

The Wolf Of Wall Street is a useful comparison. McKay brings a similar flexible narrative and free-wheeling style of filming to The Big Short – the flashbacks, freeze frames, jump cuts and multiple voiceovers familiar from many Scorsese films. All it needs is a montage sequence edited to “Gimme Shelter” to qualify for the Full Marty.

Unlike Belfort – whose crimes largely took place in the 80s – the subprime loan crisis is still a recent memory. How, then, do you make a scenario that left millions in America unemployed and homeless palpable to mainstream cinema audiences? McKay tries to overcome this by focusing on four characters who, while seeking to cash in on the crisis, qualify as outsider figures. His leads are two eccentric hedge fund managers –one-eyed Michael Burry (Christian Bale) and the Cartman-esque Mark Baum (Steve Carrell) – perma-tanned Deutsche Bank employee, Jared Vennett (Ryan Gosling), and a retired trader Ben Rickert (Brad Pitt).

Of the principals, only Baum and Vennett interact on screen. Burry is largely contained within the four walls of his office – a situation that suits his chilly, awkward character. Baum is McKay’s de facto lead: a ball of incandescent rage, routinely sent into paroxysms at the unfolding chicanery of the financial institutions. After Foxcatcher last year, Carrell continues to deliver solid dramatic work. Pitt’s Rickert – shuffling, disheveled and shapeless – recalls Philip Seymour Hoffman. Gosling seems to be playing a parody of himself.

McKay’s attempts to cover so much ground is not entirely successful. Cutting to Margot Robbie in a bath to explain subprime loans or Anthony Bourdain to in his kitchen to talk through Collateralized Debt Obligations are neat tricks, in keeping with the film’s skittish, exhilarating pace. But it becomes apparent that Burry, Baum and the rest are no better than the bankers themselves, regardless of how they are presented. The history of cinema is built on bad guys, from Tony Camote to Darth Vader; the difference is, unlike the banking community, they got their comeuppance.