The Coen Brothers' classic finally gets the deserved DVD release. 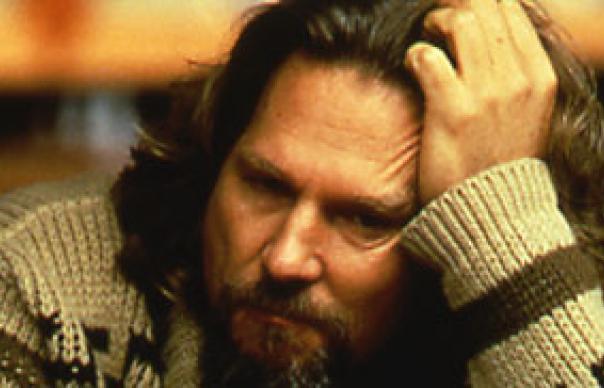 By the time they came to make The Big Lebowski in 1998, the Coen brothers seemed unstoppable. Their previous film, the snow-bound noir Fargo, won them Best Original Screenplay at the Oscars, while Joel’s wife and the film’s star Frances McDormand walked away clutching a Best Actress statuette. The awards confirmed their place among America’s most ambitious and exciting filmmakers. You might think it would be hard to top Fargo; but with Lebowski they made their masterpiece.
The Big Lebowski finds the Coens firing sparks off their two most enduring influences – the narrative twists and bluffs of film noir and the screwball comedies of Hawks and Wilder. We meet LA resident Jeff “The Dude” Lebowski (Jeff Bridges), while the first Gulf War rages in the Middle East. A White Russian-swigging pacifist, he’s a professional stoner for whom everything is “far out” or a “bummer”. He passes his time at the bowling alley with his buddies, semi-deranged Viet Vet Walter (John Goodman, perfectly imitating the gung-ho machismo of the Coens friend, Apocalypse Now director John Milius) and the good-natured but simple Donny (Steve Buscemi). All is good in the Dude’s world, until two German goons break into his house and piss on his carpet.

It’s at this point the Coens embark on a delirious joyride through the great sin city itself, executing some audacious hair-pin turns through the conventions of noir along the way. Seems The Dude shares his name with a wheelchair-bound millionaire (David Huddleston), whose trophy wife Bunny (Tara Reid) has been kidnapped. The Dude is roped in as bagman, but Walter, who just wants to help, only succeeds in making matters worse at the drop-point, swapping the ransom money for his dirty laundry. Soon a toe – apparently recently attached to the rest of Mrs Lebowski – arrives through the post.

The film is rich in so many respects. The supporting characters – played by the A list of American independent cinema – are all magnificently drawn. There’s Philip Seymour Hoffman as Lebowski’s Smithers-like secretary Brandt; John Turturro as Jesus, The Dude’s high-camp rival on the bowling lanes; Julianne Moore as Lebowski’s daughter Maude, a feminist artist first glimpsed naked “flying” on some devilish wheel-and-pulley contraption across a canvas. Elsewhere, Peter Stormare heads up the group of German nihilists out to profit from Bunny’s kidnapping, Ben Gazzara plays porn king Jackie Treehorn, and David Thewlis is particularly memorable as giggling “video artist” Knox Harrington. There’s blink and you miss ’em cameos, too, from Chili Pepper Flea and Aimee Mann as a pair of nihilists (in one exquisite piece of minor detail, we learn the nihilists were once members of German electronic band Autobahn, the Coens even going so far as to mocking up a sleeve for one of their albums as a fabulous Kraftwerk pastiche).

Of course, there’s more: the soundtrack, compiled by T-Bone Burnett, features Dylan, Beefhart, Creedence and, iconically, Kenny Rogers And The First Edition, “Just Dropped In (To See What Condition My Condition Was In)”. The famous dream sequence is a Dali-esque take on an MGM Musical, and worth a 12-page feature in its own right. And how many films are [ital] this [ital] good they can inspire an annual bowling convention, the Lebowskifest?

The film’s closest cinematic relative is Robert Altman’s superior reworking of Chandler’s The Long Goodbye (1973). Like The Dude, Altman’s Marlowe (Elliot Gould) is another shaggy-dog of a man ambling through LA. But, by casting Bridges as this “man for his time and place”, the Coens are also making sly reference to another of the actor’s great characters: beach-bum Richard Bone in Ivan Passer’s stunning film noir, Cutter’s Way (1981). Bridges is sublime as The Dude – a slob, sure, but a man who’d do anything for his friends. “Sometimes, there’s a man, well, he’s the man for his time and place,” says Sam Elliot’s Stranger in the opening voiceover. He’s a hero, of sorts, though a wonderfully unconventional one.

So, how come the Coens have never since come close to matching The Big Lebowski? Soon after, they began work on an adaptation of William Dickey’s novel To The White Sea, with Brad Pitt in the lead role as an airman shot down over Tokyo during World War II. The project repeatedly stalled due to Pitt’s other commitments, and finally ran aground over budgetary disputes. They attempted to restart it, unsuccessfully, while working on the Preston Sturges-style romp O Brother Where Art Thou? (2000) and The Man Who Wasn’t There (2001). But you wonder whether they ever fully recovered from the experience. 2002’s Intolerable Cruelty featured a chemistry vacuum at its centre thanks to the miscasting of George Clooney and Catherine Zeta Jones in the lead roles. Most recently, we endured their pointless remake of Ealing classic The Ladykillers. You sense, too, that they’ve been leap-frogged by a new generation of filmmakers, particularly Wes Anderson, Spike Jonze and Charlie Kaufman. Anderson responds to the warmth the Coens have for their quirky characters, while Jonze and Kaufman take from the surreal aspect of their work. The Coens made it OK to be kooky; the next generation feel obliged to go further.

The Coens next due later this year – an adaptation of Cormac McCarthy’s latest novel No Country For Old Men – at least promises a return to the lean, moody storytelling of their 1983 debut, Blood Simple.
We must, at least, hold out some hope. It’d be a significant loss to movies if these two, great filmmakers never found their form again.
But at least we have The Dude. And The Dude abides.