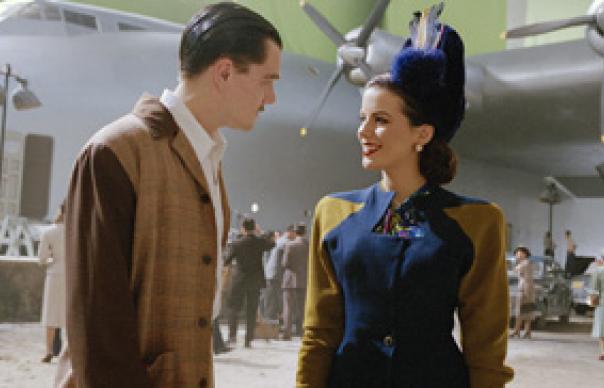 Cleanliness may be next to godliness, but Howard Hughes was never fully satisfied he’d attained either state. Scorsese’s glittering-gloomy portrayal of the insecure megalomaniac’s life (the earlier years) is at its best when examining the obsessive side of his nature, the alpha-male greed for dominance, the desire for money, women, expansion and world-firsts as symbols of this, and his conflicting paranoia concerning hygiene. Few directors ever captured the rush and rhythm of driven men like Scorsese, and if this is one of his solid not spectacular, vigorous rather than visceral films, he’s interested, and it’s intense, for the duration. Several set-pieces are anything-Spielberg-can-do breathtaking. It may be his Oscar-winner at last, if that matters. Is Raging Bull or GoodFellas any less a film for not having won one?

He’s certainly not shying away from grand undertakings here. John Logan’s script attempts to cover the various aspects of Hughes’ outer and inner lives, any one of which would make a compelling story. Arguably, he tries to juggle too many plates: is this about Hollywood’s golden age, or the miracle of manned flight, or egomania? Is the ultimate theme that power corrupts or that those without strive to bring down those who possess it? Are we pondering why sensible, strong women still can’t resist a playboy? Or is the intended focus on one man who took risks- albeit with family money – and changed the shape of the screen and of the skies forever? The bookends – with their warnings to the childhood Hughes of “quarantine – you are not safe” – even suggest this is Scorsese’s Citizen Kane, with demented hand-washing as the Rosebud trope.

We meet Hughes (DiCaprio) in the ’20s, going for broke on two fronts. He’s using his inheritance to build a private air force and shoot Hell’s Angels, a hymn to the pilots of WWI pilots, his heroes. His reckless joy in ambitious film-making is surely an echo of Scorsese’s own. Up among the dogfights and tailspins, the action and camerawork are sharper, faster, than any gung-ho blockbuster. The scenes around the Coconut Grove, too (Jude Law as Errol Flynn, Gwen Stefani as Jean Harlow), are a jazzy peacock-feathers riot. But Hughes’ constant yen for double-or-quits earns him enemies in Hollywood and in government. As he builds new planes and boosts the TWA airline, rival Pan-Am head Juan Trippe (Baldwin) persuades a sinister senator (Alda, brilliant) to investigate Hughes’ labyrinthine finances. “Wanna war with us?” snarls Alda, rattling Hughes’ over-confidence. “We just beat Germany and Japan. Who the hell are you?” In court, Hughes defies his own demons to rally, giving as good as he gets.

In his personal life, he’s been struggling to keep the ghosts at bay. Despite romances with Katharine Hepburn (Blanchett) and Ava Gardner (Beckinsale), he has lapsed into reclusiveness, locking himself in his private screening room, growing beardy, pissing in empty milk bottles. A serious plane crash (a shocking, explosive blast of cinema) leaves him scarred on many levels. “Aren’t we a fine pair of misfits?” barks Hepburn, adding: “There’s too much Howard Hughes in Howard Hughes.”

It’s hard to feel too sorry for a billionaire, and much will depend on your opinion of DiCaprio, who’s at the centre of every moment, busting a gut to convey irrepressible optimism, then arrogant swagger, then neurotic crack-up, then a revival of pioneering spirit. For this reviewer, as in Gangs Of New York, he sucks the air from a scene, too narcissistic to really engage with subtle spitfires like Blanchett or Alda, too plainly thinking about what he’s doing. For others, he’s the most electric, promising actor alive. This being Marty, comparisons with the young De Niro are unavoidable, and inevitably unflattering.

But come fly with Scorsese for a fine, forceful film that’s always arresting, if oddly dispassionate. “Find me some goddamn clouds,” rants the young Hughes as movie tyro. If it doesn’t quite soar above those clouds, The Aviator finds rich, complex depths within them.