The Afghan Whigs – Do To The Beast

It will never be over. Greg Dulli’s emotional return... 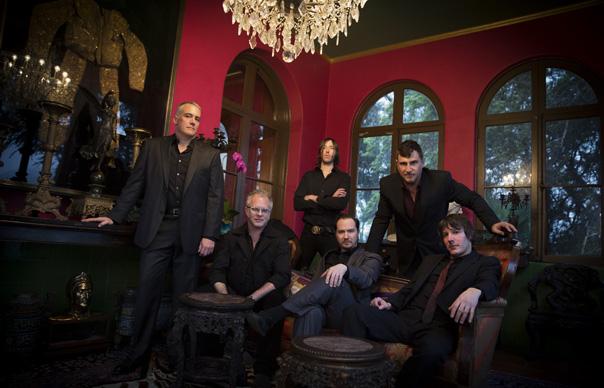 It will never be over. Greg Dulli’s emotional return…

Ted Demme’s 1996 movie Beautiful Girls contains a scene in which two characters decide to go to a Massachusetts bar on the strength of the band that’s playing there. “What kind of band is it?” asks one. “A soul band,” says the other.

The band, of course, is the Afghan Whigs, a point probably much gratifying to the band’s leader, Greg Dulli – an identification flattering simultaneously to the masculinity, cinematic aspirations and the musical passions of his band. “Soul band” was possibly a bit of a stretch, but from the late 1980s to their 2000 disbanding, Afghan Whigs spent time painting a funky and even menacing picture of love: in passion, Clavinet and compelling drama, if not always melody. In Dulli’s hands cupid’s arrow was an offensive weapon, and love a psychological illness. He summarized his position succinctly on “Neglekted” from their last album 1965: “You can fuck my body, baby/But please don’t fuck my mind…”

The band’s return, 16 years after their ostensible split (guitarist Rick McCollum is not present here), serves to prove an important emotional lesson: that time isn’t necessarily a great healer. On the opening track, “Parked Outside”, enormous guitar riffs and strings announce a revenge on the point of being enacted. Elsewhere in the album, kisses are poison. Ex-lovers are stalked, seemingly only to refine the observer’s masochism. Key words include “fear”, “burning” and “tourniquet”. There are very few glimmers of consolation and offers of rest to be found here. One small example of such is “Can Rova”, where a couple’s moonlight flit is accompanied by an accordion drone and a distant dancefloor beat.

At a time of life, in fact, when no-one would condemn Dulli for making a mature, considered and inward-looking record, he has in fact made an untamed, passionate and occasionally brilliant one. “Matamoros”, early in the album, shows a wonderful command of old and new modes. What begins with a version of the band’s default guitar chop ends with a superb shifting up into a new palette, concluding with a swooning violin meltdown – it’s Balkansploitation, in fact.

If there’s consolation to be taken from Do To The Beast, above all, it’s that the Afghan Whigs remains a high-stakes band, conducting business not with a eye on self-preservation, but in the heat of the moment. There’s something to be said for the accomplishment of songs like the closing “These Sticks”, which sounds a bit like Radiohead’s “Street Spirit (Fade Out)”, or “Lost In The Woods”, with its U2-reminiscent chorus, but for a band who has made its bed in confusion the plot feel a little too tidily wrapped up here.

On the ambiguous “Algiers”, however, we get a fuller depiction of the band’s blood and guts approach. The song commences with Dulli singing in a pitch that is clearly too high for comfort, but which he pursues to its painful and dramatic end. Ultimately, that’s the always been the band’s larger point. You might objectively know something might not work out. But since when has anyone been able to govern their passions as clinically as that? You go with your heart and do it anyway, whatever the consequences.

“Royal Cream”, towards the album’s close, digs just as satisfactorily into Dulli’s paranoid but compelling beat, the fucked mind. A strange mixture of grinding alt-rock guitar (the verse) and an upbeat pop chorus (almost like the Pop/Bowie “China Girl”, in fact), the song confronts a betrayal that feels positively Miltonian as Dulli seethes: “I know you’re sleeping with another demon….”

Crimes of passion is what the Afghan Whigs have historically dealt in – the torment, the deed, the terrible consequences. Perversely, from all this disorder the band have created, whether by happy accident or high design, magnificent, and often conceptual work: the lyrical, cathartic Gentleman from 1993, or their career-best Black Love from 1996. It’s tempting – what with the runic artwork, songs like “I Am Fire” and so on – to imagine that this album is part of some similarly novelistic design. If anything, though, these songs seem too savage – and if we know one thing about Dulli’s beast, after all, it’s that it won’t easily be tamed.
John Robinson

Q&A
GREG DULLI
How did you name the record?
My friend Manuel had never heard beatboxing before and he thought I was saying “Do the beast what you do to the bush” – I loved the Do to the Beast part. It’s no deeper than that. Don’t get me wrong – that the phrase landed on the word “beast”? Not unattractive to me.

Has your writing about love and passion changed down the years?
It’s hard to step out of yourself and say “You’re much more accommodating than you were as a 26 year-old.” I think as a human being I have hopefully evolved to the point where I can understand both sides of the issue I’m speaking about.

What can you do with the Whigs you can’t do anywhere else?
I never feel constrained by the environment – I go for it equally in all of my groups. I have a long history with John Curley, there’s telepathy there. There’s a supernatural quality to proceedings, a comfort – to jump off the cliff, so to speak.

Are you happy to rock in your 40s?
Absolutely! I will point to Nick Cave, a perfect example. Not only was he rocking out in his own band, he decided to form another band in order to rock out even harder. What are you supposed to do. Just shuffle off? Not going to happen.
INTERVIEW: JOHN ROBINSON

Send us your questions for Jason Pierce