THE ACORN – NO GHOST 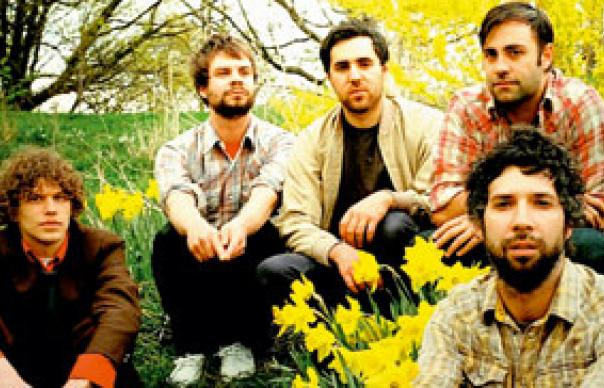 Although they formed in Ottawa back in 2003, The Acorn only truly arrived with their last album, 2008’s Glory Hope Mountain. It took a few listens for the full scale of its ambition and beauty to really sink in, but when it did you realised that here was one of those rare bands that dealt exclusively in mystery, where everything was at once both familiar and oddly strange: like Talking Heads bumping into Fleet Foxes in dreamtime.

The band gathered around the central pivot of Rolf Klausener, who wrote the songs and sung them up and out in a yearning, yelping voice that seemed to constantly be striving for something he couldn’t quite reach. Lyrically, Glory Hope Mountain was a moving account of the early life of Klausener’s mother, who barely survived her birth (“your rosy lungs were empty on the day that you were born”), almost drowned in a flood, ran away from an abusive father aged 12 and emigrated to Canada from Honduras without being able to speak either English or French.

The music proved as compelling as the narrative. The Acorn displayed a knack for writing simple melodies stretched out over the bones of indie-folk, afrobeat, crooked rock and a hint of something more epic. It was never quite clear how the shapes fitted together or how the spell was cast, but there was no disputing the wondrous results. For anyone who fretted that Glory Hope Mountain might have been a beautiful fluke, No Ghost confirms The Acorn’s credentials, building thrillingly on the band’s ability to access a variety of moods and textures. It veers from plangent ballads via scrubby experimentation to conventional rock dynamics, and it’s not incidental that No Ghost was recorded in a cottage in the back of beyond in Quebec, the kind of place where phone signals peter out into static. On occasion the songs here are almost hypnotically hushed. At other times they’re both louder and more unhinged than ever before. There’s always been muscle in The Acorn’s music, now it’s simply more pronounced. It’s most evident on the abrasive “I Made The Law”, a minor-key march that unravels like a curse, and the title track, which kicks off like REM’s “Finest Worksong”, the crunchy riff dodging a maze of harmonics before breaking into a sun-dappled chorus.

The preppy pop bounce of “Crossed Wires”, written and sung by bassist Jeff Debutte, is something new, but much of No Ghost contains echoes of Glory Hope Mountain. “On The Line” and “Kindling To Creation” convey the sense of weary reflection that follows some great storm, while the band’s propensity for zinging guitars and clacking rhythm lights up “Restoration” and “Bobcat Gold Wraith”, which starts as a burbling pot-boiler and builds to something almost anthemic, kicked forward by heavy bass and horns.

“Slippery When Wet” – banish any thoughts of Bon Jovi – enters more fragile territory. It rolls along on a circular folk guitar pattern and gentle fiddle, as Klausener stands amid the fallen leaves and mournfully “counts the colours at my feet”. It’s almost unbearably lovely, but it’s the still simplicity of “Misplaced” that brings it all home. Small and perfectly formed, it’s a vindication of the band’s attitude. Heading towards greatness, but for all that, unassumingly so.
Graeme Thomson

Q&A Rolf Klausener
Glory Hope Mountain was much loved; did you feel more pressure this time?
I’d be a total liar if I said that stuff doesn’t linger in the back of your mind: ‘I wonder what reviewers will think of this song?’ The best thing to do is wait for moments where you feel really inspired and don’t have to second guess yourself. As a writer, you know when it works.

How does this album differ from the last?
This time we had no specific themes, no story, it was just about the song. It was interesting, liberating and terrifying all at the same time. We’d been on the road for 26 months without a real break, so we gave ourselves a holiday and rented a cottage in Quebec. There were no grand expectations, but in the first three days me and Pat [Johnson, percussionist] wrote the skeleton for about 15 songs.

What was life like in the cottage?
We were completely cut off. We didn’t even know that Michael Jackson had died. My favourite songs on No Ghost, “Cobbled in Dust” and “Misplaced”, were written there. They just kind of happened.