Coppola’s latest take on family tensions is self-indulgent but beguiling... 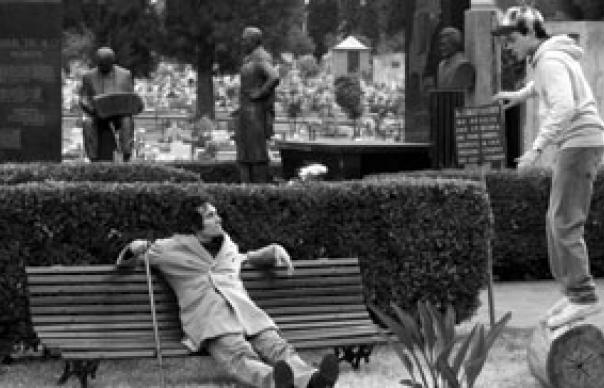 Tetro is Francis Ford Coppola’s latest two-fingered sign in the direction of contemporary Hollywood. Late in his career, the director of The Godfather and Apocalypse Now is seeking to re-invent himself as an auteur, making idiosyncratic and personal films outside the studio system. He knows that films like Tetro and its predecessor, 2007’s Youth Without Youth, will not be widely seen but that is part of their attraction – he wants to be in the margins. Coppola yearns for the innocence of the late 1960s and early 1970s, the period in which he first set up his filmmaking collective, American Zoetrope.

One of the paradoxes about Tetro (given that Coppola is now in his seventies) is that it seems like a young man’s film. Its themes are precisely those you would expect from a director or writer starting out and in search of his own style. This is a story about two siblings (or so they appear). Newcomer Alden Ehrenreich plays Bennie, a young naval cadet who arrives in Buenos Aires in search of his estranged older brother, Tetro (Vincent Gallo).

The Buenos Aires in which Gallo’s Tetro mopes around is a mythical place, a little like 1920s Paris in the era of Ernest Hemingway and Gertrude Stein. It’s a city inhabited by artists and intellectuals. There is an air of melancholy reinforced both by the tango music and by the black and white cinematography, heavy on the chiaroscuro. Tetro, first seen on crutches, lives with his girlfriend and muse Miranda (the gorgeous Maribel Verdú.) He is a writer of uncommon ability who relishes his own obscurity. Both brothers are struggling to emerge from the shadow cast over them by their domineering father (Klaus Maria Brandauer, in Bond villain mode), a brilliant but utterly ruthless conductor spotted in stridently coloured flashbacks.

The elements here are all very familiar. The relationship between Bennie and Tetro echoes that between Matt Dillon and Mickey Rourke in Rumble Fish. (For all his nuttiness, Vincent Gallo is an intense and charismatic actor with at least some of Rourke’s magnetism.) Coppola’s screenplay unfolds like a Tennessee Williams family melodrama. The Oedipal symbolism is heavy-handed. There is a self-reflexive quality to the storytelling. Coppola throws in lots of references to the myth of Faust and to Powell and Pressburger’s The Tales Of Hoffman and The Red Shoes. Tetro, we’re told, is “the best lighting guy” in La Boca. He’s a genius. This – apparently – gives him the licence to behave “like an asshole”.

The question whether work needs to be seen widely to have any meaning is foregrounded. Tetro is quite happy to languish in obscurity. But his brother has other ideas – and is even ready to tamper with his writing in order to secure him an audience.

All the musing about the nature of creativity and originality is – one guesses – as much to do with Coppola’s own situation as a film-maker at a crossroads as it is with the plight of the bickering brothers. There is a sense of Chinese boxes about a film in which a director, whose own father (Carmine Coppola) is a composer, ponders the plight of the sons of a composer.

“Do you know what love is? It’s a quick stab in the heart,” Tetro hisses at his younger brother as he ponders his troubled background. The irony is self-evident (and a little tiresome). The artist is alienated from his family. At the same time, his creativity remains entirely rooted in his relations with that family. If he didn’t have such a monstrous father to react against, he would have nothing worthwhile to express. In one pivotal scene, we see him announcing to his father his plans to become a novelist. Brandauer quickly swats him down, telling him there is “only room for one genius” in this particular family – and he already holds the position.

Self-indulgence is part of the fabric of Tetro. This is Coppola making a film on his own terms, about the subjects that preoccupy him. Certain scenes fall flat. There is a curious cameo from Pedro Almodóvar’s erstwhile muse Carmen Maura as “Alone”, a Cruella de Vil-like critic who has turned against Tetro in mysterious circumstances. The tone veers disconcertingly between naturalism and Powell and Pressburger-style expressionism. At times, we seem to be watching a moody, John Cassavetes-style psycho-drama about a very damaged family – but the storytelling style is so far-fetched and baroque that it risks undermining the emotional credibility of the scenes between Bennie and Tetro. What the film also conspicuously lacks is the narrative drive of Coppola’s films like Apocalypse Now, The Godfather or The Conversation. The story-telling style is deliberately digressive. There is a freewheeling, improvisatory quality to the way in which Coppola approaches his material. The presence of a Labrador puppy that looks as if it’s escaped from a nearby Andrex commercial is a further distraction.

Some audiences are likely to be highly sceptical about Coppola’s embrace of auteur-style indie cinema so late in his career. One guesses that the studios aren’t currently queuing up to work with him anyway. In recent years, he has been far less sure-footed in the way that he has navigated the Hollywood system than, say, Martin Scorsese, who has continued to make movies that work in the mainstream but that still carry his imprint.

Thankfully, Tetro still makes for largely beguiling viewing. Coppola may be working on, for him, a smallish budget (reportedly around $15 million) but that doesn’t mean his usual craftsmanship has abated. The film is sleekly shot and edited. (Several of the director’s normal collaborators are in tow, among them sound maestro Walter Murch.) Gallo is a revelation as the moody writer hiding away down South.

Think of Coppola and big family sagas are what come to mind. Here, unlike in The Godfather films, the violence is largely kept at bay (even if the brothers do end up on crutches). The dynamics, though, remain largely the same. The writer-director is probing away at sibling rivalry and the tensions between fathers and sons. For all the eccentricities of a screenplay that seems to have been written on the hoof, Tetro at its best has some of the same emotional intensity that made those equally fraught encounters between members of the Corleone family so memorable.
Geoffrey Macnab