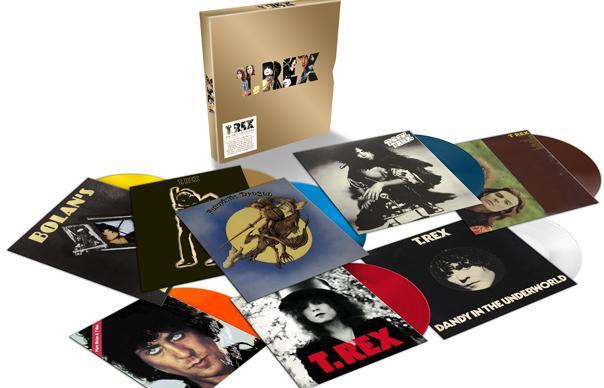 “What’s happened to Donny Osmond and David Cassidy now?” sneered boogie knight Marc Bolan in 1976, in the certain hope of his own imminent commercial resurrection. “I’d be insulted if I was written off with them. I never was a puppet. There is a difference between being a teenage idol and teenybopper idol.”

The eight T. Rex albums recirculated in The Vinyl Collection may confirm that Bolan was the dippy Donovan to the shape-shifting Bob Dylan of David Bowie – the man who ended up paying his son’s school fees after Bolan’s oft-mocked last hit in 1977 – but gold abounds among the glitter.

Bolan’s electrically-enhanced surge into the mainstream was a ‘Judas’ moment for those enamoured of the leaky teapot acoustic psychedelia of Tyrannosaurus Rex, but John Peel understood how readily his elfin protégé embraced glam celebrity, noting: “He was certainly always an ambitious lad.”

Waistline and ego expanding, Bolan lost focus for 1973’s Tanx [6/10], but with the teens moving on, simultaneously peaked and troughed on the opulent but spooky Zinc Alloy And The Riders Of Tomorrow [8/10] the following year. Clock the dead-eyed front-cover resemblance to Syd Barrett – ex-boyfriend of Bolan’s wife June Child, and the man Stamford Hill’s ace face once cited as his “main influence” – and you can fathom something of its opium den darkness. “Her nose is smashed her frame is bent,” he madcap laughs on Venus Loon. “She’s covered in flies.” His awful, awful crawl through his back catalogue on the manic “Sound Pit” (“Metal Guru’s in the loo with my glue”) and street gang fantasia “The Leopards” (“King Kong built a car inside his brain”) are no less unhinged.

Things calmed down thereafter; Zip Gun [6/10] is OK, 1976’s Futuristic Dragon [7/10] is enlivened by the “frog in her hand” whimsy of New York City, while the cheekbones are sharp again on 1977 swansong, Dandy In The Underworld [7/10]. Captain Sensible recalls a tracksuited Bolan jogging around service stations while support act the Damned ate their fry-ups on tour that year; delusional maybe, but a teenage idol in training once more.
JIM WIRTH