Tim Burton unveils another of his ghoulish masterpieces 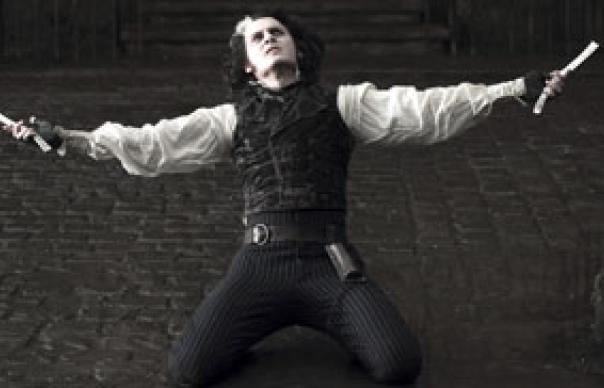 A man can grow tired of ice sculpture. Imagine twenty years of solitude up in that castle: deep into middle age, goth coiff shot white, old Ed Scissorhands turns to brooding. The memory of that one chance of happiness, the one woman he loved, cruelly taken from him! Sooner or later, even the most innocent man could curdle into bitterness. Even Johnny Depp might find a use for those lethal blades…

Part of the murderous fun of Sweeney Todd, Tim Burton’s first great film in almost fifteen years, is how richly it slots into the auteur’s oeuvre. You could easily imagine it as a Hammer sequel to the Disneyweird fable of Scissorhands. You could see it as a variation on Batman – the vigilante who sides with sick vengeance rather than sober justice. Or you could even see it as the latest instalment of the Burton/Depp surreal autobiography – the darkness that a decade of Hollywood remakes might lead you to…

Burton may not have been many people’s first choice to bring Sondheim’s revenge tragedy/splatter musical to the screen. But though not generally a fan of showtunes (as anyone who recalls the drab numbers from Corpse Bride might have guessed) he was an early admirer of Sweeney Todd, having been impressed with its gore and gusto as a student, finding it not so far from his beloved b-movie gore and black and white horror.

Perhaps because the story is so simple – one wronged man’s vengeful drive to dementia and doom – and Sondheim’s songs are so strong, Burton is freed up to focus on the atmosphere. With Dante Ferreti, he’s created a magnificently bleak London, a 19th century capitalist hellmouth. And his cast go at the revenge tragedy with great gusto – none of them trained singers, but all great dramatic performers. Depp is remarkable, a cross between Dave Vanian and Bogart in The Return of Dr X. Alan Rickman and Timothy Spall are superbly loathsome as Judge Turpin and Beadle Bamford. And Sacha Baron-Cohen makes an audacious show-stealing bid as the macaroni rival barber.

Helena Bonham Carter has a good go at humanising the pie-eyed pie-shop slattern Mrs Lovett, and Burton claims to see the story as another doomed romance. But it’s the giddy, relentless nihilism of the film that will thrill even the most showtune-phobic. Tim Burton seems finally to have grown out of fairytales.