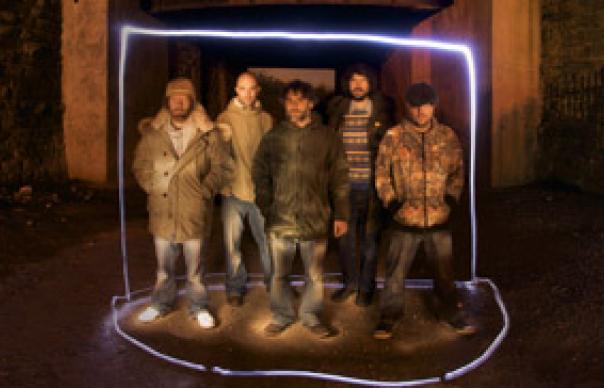 In the gap between their first album for Rough Trade, 2007’s Hey Venus!, and Dark Days/Light Years, the personnel of Super Furry Animals have been on what one might call a busman’s holiday. Gruff Rhys has been exploring the life of maverick automobile manufacturer John DeLorean as part of electro-pop duo Neon Neon. Electronics guru Cian Ciaran has been in the studio labouring on the next record by his techno project,Acid Casuals. Drummer Daf Ieuan and bassist Guto Pryce, meanwhile, joined up with actor Rhys Ifans in gonzo Cardiff supergroup The Peth, an excellent excuse to party their way from Portmeirion Town Hall to Hoxton Bar And Grill without ever having to put on a pair of shoes.

No word from guitarist Huw ‘Bunf’ Bunford, which probably explains why he’s so keen to get stuck in here. Dark Days/Light Years commences with his “Crazy Naked Girls”, an indulgent voodoo-rock jam that romps along on romping Ringo drums, wah-wah-treated guitar freakouts, and at least three false endings. Clocking in at a little over six minutes, it’s more the sort of song to kick off an encore than a record, but at nine albums old, Super Furry Animals have got quite used to doing exactly what they please.

Whereas in music, a taste for eccentricity is so typically coupled
to a flash-in-the-pan lifespan, paradoxically for Super Furry Animals, it appears to be the secret of their impressive endurance. Their fans, a fiercely loyal bunch, wonder out loud why they’re not one of the biggest bands in rock. Everyone else notices songs called things like “The Very Best Of Neil Diamond” and “White Socks/Flip Flops”, an occasional tendency to sing in their mother tongue – represented here by the cheery “Lliwiau Llachar” (it translates as “Intensely Bright Colours”) – and a taste for peculiar subject matter. That last trait is admirably illustrated by “Inaugural Trams”, a corporate hymn dedicated to an imaginary city’s travel network, Gruff joyously reeling off a list of facts and figures about reduced pollution emissions and the like, interrupted only by a brief spoken-word segment in German courtesy of Franz Ferdinand’s Nick McCarthy. In the hands of others, this sort of activity might feel like arsing around. In the hands of Super Furry Animals – who have always known when to play it straight, as well as strange – it’s the mark of a band that will never be content resting on their laurels.

But if recent Furries albums have shown a sneaking tendency towards sleepy country balladry, Dark Days/Light Years seems keen to slide out of that particular hammock. The attendant press communiqué suggests Daf has developed “a pedal steel phobia”, and it’s true, this is a more upbeat Furries, more concerned with the interplay of a live band, the dynamics of riff and groove. “Inconvenience” and “Mountain” are uncomplicated glam stomps, the former a close ringer for The Sweet’s “Blockbuster” (and their own “Golden Retriever”), the latter a lyrically absurdist number sung by Cian that seems to concern the noble practice of chilling out and getting things in perspective. Electronics do have a place here, although they’re inevitably woven into the fabric of songs, most successfully on “Cardiff In The Sunshine”, a gorgeous eight-minute album centrepiece that winds vocoder-treated vocals, ascending synth lines and acid squelches from gentle beginnings towards a sunburst climax.

“Moped Eyes” is also the closest thing this album has to a hit single, which is to say, not especially close. But then you feel that was never the intention. Dark Days/Light Years is a record that privileges the five-way dynamic that has lead Super Furry Animals through nine albums. As with, say, Radiohead’s In Rainbows, the charm here is in hearing a veteran band who still really enjoy the process of getting in a studio and playing music together. And it’s great, still.

UNCUT Q&A: Gruff Rhys & Huw ‘Bunf’ Bunford
Dark Days/Light Years feels very much like a full-band record. Was this the approach from the outset?

Gruff: Yes. The whole record is built around material we’ve been trying out in soundchecks and rehearsals for the last nine years or so. Some, like “Moped Eyes”, are improvised songs we developed in the studio.
Franz Ferdinand’s Nick McCarthy adds German vocals to “Inaugural Trams”. What’s he – and by extension, the song – on about?
Gruff: It concerns the opening of a new tram system in a socialist utopian middle-European town. The chairman, armed with the latest eco-speak, cuts the ribbon. Nick plays the part of the tram guard, announcing the next stop.

How is Rough Trade working out for Super Furry Animals? Have you had to alter expectations?

Bunf: First off, we intend not to tour this album in the conventional way. All promotion will be done through films and live footage of us in the studio performing the album – a very cost-effective way of getting material out into the public domain. About seven years ago I made a bet with our management that there would soon be only one major label left – I’m quietly confident he’ll be paying out soon. Nevertheless, I didn’t expect it to be Starbucks. Still, making a latte in 30 seconds – that’s Darwinism in motion.