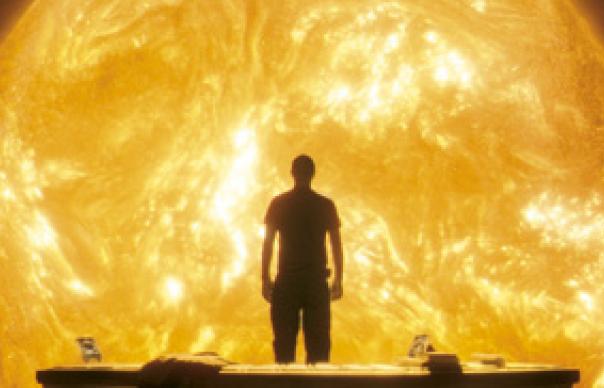 
PLOT SUMMARY: The eight astronauts of the Icarus II are dispatched to drop a Manhattan-sized bomb to rekindle the fires of the dying sun. The closer they get to the sun, the more they bicker. When they override the advice of the ship’s computer to go in search of the lost Icarus I probe, they cross a line between reality and paranoia. And not all of them will be coming home.

Almost 40 years since the robotic cameras of NASA and the imagination of Stanley Kubrick defined the extraterrestrial universe, space presents a problem to a filmmaker. If boldly going where no man has gone before is no longer an option, what do you do?
Danny Boyle and screenwriter Alex Garland have faced this kind of quandary before. Their last collaboration, 28 Days Later, re-imagined the zombie movie by placing the action in a paranoid version of contemporary Britain. The notion of the walking dead wasn’t new, but the context added urgency to the project.

Sunshine is sci-fi for the rave generation. It’s about alienation, not aliens, and while the crew of the Icarus II is on a mission to reignite the sun, the film’s focus is the trip, not the destination.

The action starts with the eight astronauts of Icarus II sitting down to a Chinese meal, 55 million miles from home. The ship’s payload is a bomb, with a mass equivalent to that of Manhattan, which will be dropped onto the sun, to create a star within a star.
The ship’s name is a clue that these astronauts are not travelling optimistically. The sense of claustrophobia is heightened by the soundtrack, a symphony of understated bleeps by John Murphy and Underworld. The cinematography by Alwin KŸchler (see also Morvern Caller) is never less than gorgeous.

Needless to say, things do not go smoothly. As well as the nightmares of the ship’s physicist Capa (Cillian Murphy), the crew face dilemmas that drive the tone from jeopardy – Speed on a spaceship – through psychedelic implosion, into straightforward horror. The dialogue is an ER-like racing commentary of scientific babble (“The mainframe is out of the coolant!”) which is mostly convincing, though there are moments which would have embarrassed Captain Kirk, most notably a line about communing with God.
The last act almost undoes the good work, but Sunshine remains memorable for moments of sublime beauty, notably the blast through a broken airlock at minus 270 degrees C (“it’s gonna be cold, but we’ll make it!”).

As is often the case with Boyle, the sense of the metaphor is sacrificed in favour of sensation. The Trainspotting director has added the hardware of sci-fi to the fatalism of a submarine drama. It’s not rocket science, but it’s rarely dull.

UNCUT: Why did you want to be in Sunshine?
MURPHY: I thought it had all the elements of the classic sci-movies like Alien and Solaris. A group of people in a confined space, and the pressure of being in that confined space for a long time. Ostensibly it’s about astronauts trying to re-ignite the sun, and keep the earth alive, where in fact I think it’s more about religion versus science. That really appealed to me. What Alex [Garland] managed to do in the script is tick all the boxes of a potentially great blockbuster and put some interesting questions in there.

It’s like a rave movie.
It is meant to be far-out. Like who the hell knows what it would be like to get that close to the sun? There’s a line in the movie where I say space and time distort, and towards the last act of the movie, that’s what Danny and his effects boys were trying to create.

How did you prepare?
I hung out near Geneva with a bunch of absurdly intelligent physicists. There was one guy on the movie called Brian Cox who’s the professor of physics in Manchester, and I spent a lot of time with him. He used to play in bands, he was the keyboard player for D:ream. He let me ask him hundreds of idiotic questions. Then I went out to Geneva with him. I wanted to see what these guys actually think about the meaning of life, and the meaning of everything – and if you’re thinking about that all the time, what does it do to you.

28 Days Later seemed to fit in with a general feeling of dread and paranoia. What’s the broader context for Sunshine?
The set up is: if the sun’s dying, is that God’s will and should scientists interfere in God’s will? There’s an obvious conflict there. Then there’s the fundamentalism, that’s happening in religion around the world – not just in the Muslim faith but also in America. It’s being sold as a sci-fi adventure, but if you want to look a bit more closely you’ll find some interesting themes.