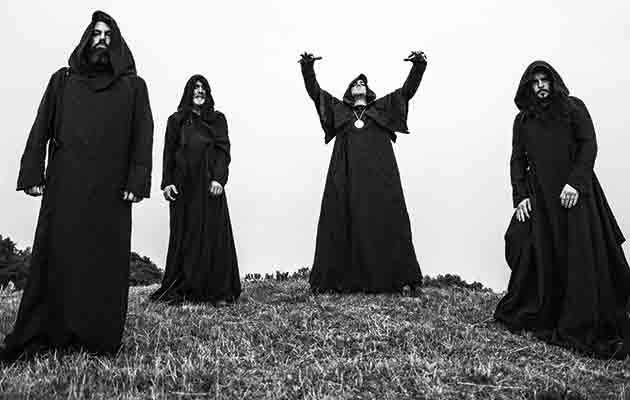 In French photographer Estelle Hanania’s shots for the sleeve of Kannon, the members of Sunn O))) can be seen in the band’s signature hooded robes lurking about a magnificently gloomy Oslo mausoleum. Apparently, they have a thing about loitering in these kinds of spaces – in the artwork for 2009’s Monoliths & Dimensions, it was an Aztec pyramid.

As they so often do, these strange figures look as if they’re preparing for a mysterious rite. Perhaps it has something to do with the cryptic black object on the album’s cover. Though designed by Swiss artist Angela LaFont Bollinger as a visual representation of the Buddhist goddess of mercy for which Kannon is named, it more strongly resembles a charred icon from a long-defunct religion now being readied for worship by a new circle of eager adherents. In other words, you don’t have to be Peter Cushing to know that unspeakable things are about to happen even if – as was the case with the banks of fog that filled Royal Festival Hall during Sunn O)))’s appearance during David Byrne’s Meltdown last summer – you’ll strain your eyes trying to see what the hell they are.

The music on Kannon has no shortage of sinister elements, either. Even more inhuman than the groans and shrieks of amplifiers are the noises that emerge from Attila Csihar, the Hungarian vocalist who has been a frequent collaborator with the core Sunn O))) partnership of Stephen O’Malley and Greg Anderson when he’s not busy fronting Norwegian black-metallers Mayhem. Rarely have Csihar’s guttural rumblings been so terrifying as they are when they make their first appearance a few minutes into the first of Kannon’s three parts. Compared to him, Smaug the dragon sounds as menacing as Taylor Swift.

Of course, all this ought to be entirely ridiculous. And at various junctures in Sunn O)))’s 17-year history, it has been. But O’Malley and Anderson have always been quick to concede the absurdity of their highly stylised vision of metal at its blackest and sludgiest, perhaps because they’re also confident about their music’s ability to overwhelm everything in its path like a river of toxic ooze. With its combination of high-concept ideas and low-end, bowel-quivering ballast, the formula has proven to be irresistible to eggheads and headbangers alike.

Now, thanks to the instantly legendary Meltdown performance and the band’s bruising collaboration with Scott Walker on last year’s Soused, Sunn O))) may be breaking through to listeners beyond the metal and experimental-music camps that have made equal claims on the band since it first emerged in Seattle in 1998. While Sunn O)))’s own cult of adherents is well schooled in the band’s studiously curated selection of reference points (the gnarly drones of Dylan Carlson and Earth, the sustained tone compositions of LaMonte Young, the none-more-black extremes of Darkthrone and Bathory) and keenly familiar with its collaborators (Merzbow, Boris and Ulver all having preceded Scott), these newcomers are enthralled first and foremost by the spectacle and scale of it all. Even though any work of ambient doom metal played by scary dudes in robes will remain a bridge too far for many, Kannon will leave other neophytes feeling awed by the complexity and physicality achieved here and rightfully so.

The album’s 34-minute length adds to the air of accessibility, at least by Sunn O))) standards. It’s also a more dramatic demonstration of the band’s core ethos than might have been possible on the recent collaborations with Scott Walker and Ulver, as well as the far more guest-heavy Monoliths & Dimensions. Not since 2004’s White 2 has the band been so pared down or sounded so focused on the mission of achieving maximum density.

The music here first began to take shape during the sessions for Monoliths in 2007 and continued to develop via live performances. Though longtime collaborators such as Csihar, Oren Ambarchi, Rex Ritter and Steve Moore all contributed to Kannon’s triptych, the interplay between O’Malley’s guitar and Anderson’s bass often provides the music’s richest moments. The surprising sensitivity that the players exhibit towards each other defies the assumption that Sunn O))) entirely owes its impact to slow-motion riffage or cascades of feedback. In fact, the guitar heroics of “Kannon II” would seem downright Hendrixian if they weren’t accompanied by what sounds like a swarm of angry bees, with Csihar somewhere in the middle of them trying to conduct a black mass.

Speaking of masses, Sunn O)))’s longstanding penchant for pomp and ritual has never before yielded music that seems so religious. That association is no doubt fostered by the liturgical nature of Csihar’s singing (rather than his growling) and the Buddhist reference in the album’s title, Kannon being the figure who listens to the sounds of suffering throughout the world. While doubters may scoff at the possibility there’s a devotional dimension to Sunn O)))’s sonic monoliths, Kannon could very well elicit a meditative response from anyone who can hear it as something more than a hellish miasma of noise. Indeed, if not for the Hammer Horror signifiers of evil that pervade the band’s visual presentation, Kannon could soundtrack a yoga class, albeit one taking place in the sixth circle of hell.

Q&A
Stephen O’Malley
How do you think Kannon compares with your previous albums?
I was playing the mix to Oren Arambachi, who plays on the record. He reacted by saying, “You know what? I think this is pretty accessible for Sunn O))) — it’s kind of like Sunn O)))’s pop album.” And he wasn’t making a joke. He was making a metaphor, obviously – it’s not pop. But for Sunn O))), there’s something about it that you can grasp a little bit more. It’s not because of the length or the speed – there’s more on the surface here. This record is close to how the band really sounds live in the last couple of years.

Do you think that the music on Kannon is still steeped in the band’s more-is-more aesthetic?
It’s not like it’s all really coloured by a lot of effects or crazy edits or stuff like that – it’s more the sound of our amps. Of course, there are overdubs and Attila may have three vocal mics going at once, or maybe there’s a sub synth that Oren did that sounds like an avalanche happening, but it’s not excessive – they’re all parts of the arrangement. What’s excessive is the fact we’ve arrived at a place where each guy needs four full amplifier stacks on stage, or that we have a sponsorship with the fog machine company, or that we have to air-freight 50-year-old amplifiers to Tasmania to play one show – that’s excessive. But hey – who gets to do this shit?
INTERVIEW: JASON ANDERSON