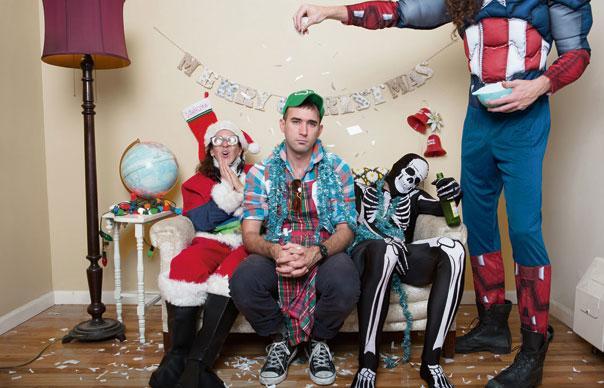 Like the indie equivalent of the Queen’s Speech, beamed in from Brooklyn rather than Buck House, Sufjan Stevens’ seasonal message-in-music has become something of an institution. Silver And Gold is a companion to his 2006 Yuletide box-set Songs For Christmas Vols. 1-5, and collates the five Christmas EPs Stevens released annually between December 2006 and December 2010.

In total there are 58 songs, ample indication that this project is much more than an extended joke. Stevens is a Christian who believes “we’ve made Christmas our bitch”, and this music, though frequently playful and dusted in silliness, ultimately has a serious, sincere purpose in attempting to divine meaning from the blizzard of confusing and contradictory signifiers – religion, consumerism, pop culture, family, magic, tawdry reality – which make it such a disorientating time of year.

The intent is mirrored in the scope of the material, which encompasses secular 20th-century standards, ancient seasonal hymns, classical pieces and bespoke originals. Featured composers include John Dowland, Robert Burns, Janáček, Jerry Hermann, Joy Division, Bach and Sammy Cahn; collaborators include members of The National and Arcade Fire. There’s some latitude in the song selections – I’m not sure how Prince’s “Alphabet St” qualifies, but I’m glad it does – and times when Stevens’ seems to bend the concept towards a more general purpose. “Behold! The Birth Of Man, The Face Of Glory” and “Even The Earth Will Perish And The Universe Give Way” are not only archetypal Stevens song titles, but either could hold their own on Seven Swans or Illinois.

As he ping-pongs between childlike wonder, solemn contemplation, comedy, devotion, pastiche, mysticism and plain nonsense we gain insights into both Stevens’ core creative concerns and his artistic evolution over the past few years. The earliest EP, “Gloria”, is the most folky and straightforwardly beautiful, featuring a handful of terrific collaborations with Aaron and Bryce Dessner from The National. The lilting “Carol Of St Benjamin The Bearded One” rather movingly recalls “the way he brushed his beard against the cedar tree”, while anyone who has ever wondered what constitutes a “Lumberjack Christmas” will find their answer.

The second EP, “I Am Santa’s Helper”, deliberately goes to extremes, alternating between sacred classical works (including a glorious reading of 17th century German hymn “Ah Holy Jesus”) and increasingly skittish, deconstructed versions of the classics of the genre. Fancy hearing “Jingle Bells” restyled as a Pixies demo with a kids chorus? Or “We Wish You A Merry Christmas” featuring a drunken oompah band apparently playing underwater? Or “Hark The Herald Angels Sing” set to a backing track which appears to involve “Heroin” and “Baba O’Riley” colliding in the snow? Look no further. The later EPs, meanwhile, point towards the more experimental machine music of Stevens’ last album proper, 2010’s The Age Of Adz: “Good King Wenceslas” and “Do You Hear What I Hear?” celebrate Christmas Kanye style, all blippy electronics, crunched beats and vocoder-treated vocals.

Woven amongst all this is a generous number of Stevens’ originals, not always notable but lovingly rendered. “Ding-A-Ring-A-Ling-A-Ring” (“Baby Jesus is a king-a-ling-a-ling-a-ling”) is a brilliantly sloppy T. Rex pastiche and the squelchy synth motif in “Angels We Have Heard On High” jauntily doffs its Santa hat to Macca’s “Wonderful Christmastime”, but there is poignancy, too, in “Christmas In The Room” – “it’s just the two of us this year” – and the bleached bad vibes of “Happy Karma Christmas”. The entire affair concludes, epically, with “Christmas Unicorn”, a kind of cosmic manifesto disguised as a children’s song which incorporates “Love Will Tear Us Apart” into its climax. Well, why not.

Something for every conceivable Christmas, in other words, but even ignoring the tinsel trim Silver And Gold is another persuasive testament to Stevens’ multi-faceted talents. Inspired, frustrating, wayward, indulgent, funny, heartfelt and eclectic, taken in one sitting it’s far too much, like gorging on the most excessive turkey dinner with all the trimmings. In smaller doses, however, it’s more like a musical advent calendar, almost every song offering a fresh and sometimes provocative window on a well-worn theme.
Graeme Thomson