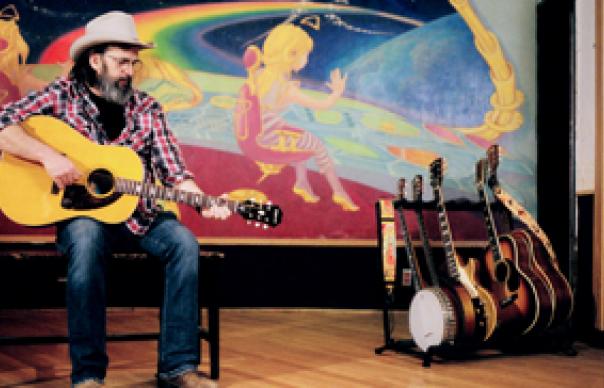 Like Tom Russell and Dave Alvin, Earle is a songwriter who sharpens with age. Recent albums “Jerusalem” (2002) and 2004’s “The Revolution Starts…Now” found him politically charged, tilting at Bush & Co. with undisguised revulsion. It was reflected in the music too, which was gruff, tetchy, raw.

Now, a move to New York (Greenwich Village to be specific) has given Earle fresh impetus. Produced by Dust Brother John King at Electric Lady Studios, “Washington Square Serenade” feels far more personal. Layering acoustic and electric guitars over vaguely hip-hop beats, much of it sounds like Earle taking stock of his new home and nodding his approval. New York, he admits, was where he was always headed. Nashville just happened to get in the way.

“Tennessee Blues” directly addresses his decision to quit Nashville two years ago. Set to bright guitar and skeletal beats, Earle growls “Sunset in my mirror / Pedal on the floor / Bound for New York City / And I won’t be back no more”. And why would you, when you’re nestled in a garden apartment on the street depicted on the sleeve of “The Freewheelin’ Bob Dylan”?

Elsewhere, there’s a new thrust to most of the other songs too. “Satellite Radio”, bizarrely enough, begins like Portishead, then opens out into an improbable kind of folk rap that’s one of the best moments here. And with traditional Brazilian rhythms courtesy of Forro In The Dark, “City Of Immigrants” finds Earle plugging in to a new strain of urban tropicalia.
Of course, this is hardly wholesale reinvention. Wife Alison Moorer duets on “Days Aren’t Long Enough”, while the country boy shines through on the banjo-heavy “Oxycontin Blues” and an old-timey “Jericho Road”. It’s all invigorating, wonderful stuff. Wherever he goes, Earle finds a rich seam of song to mine.